Late magic has been missing from Seahawks' lost season 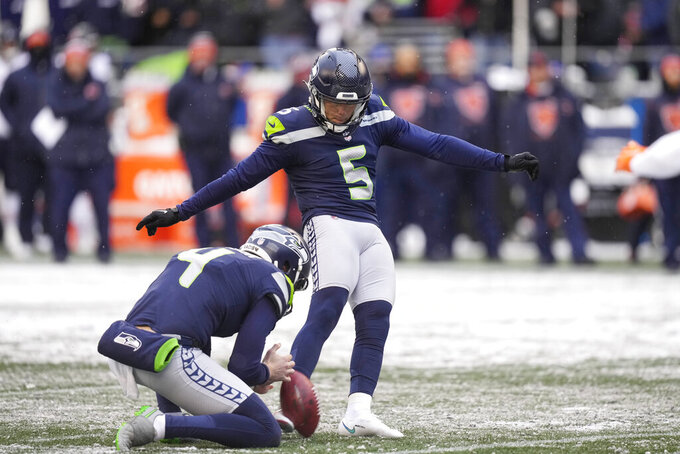 Seattle Seahawks kicker Jason Myers (5) connects for a 36-yard field goal against the Chicago Bears as Seahawks' Michael Dickson holds during the first half of an NFL football game, Sunday, Dec. 26, 2021, in Seattle. (AP Photo/Stephen Brashear)

RENTON, Wash. (AP) — There’s a page inside the information packet the Seattle Seahawks release weekly that lists all the moments in Russell Wilson’s career when led a game-winning comeback in the fourth quarter and overtime.

There are 35 listings in total, a staggering number and tied with Matthew Stafford for the most of any quarterback since Wilson arrived in the league in 2012.

But there is a noticeable absence from that list.

There are no listings from this season, which speaks largely to why the Seahawks are 5-10, eliminated from playoff consideration and likely headed for an offseason of major changes, the likes of which Seattle hasn’t seen during the Wilson and Pete Carroll era.

Those late-game moments that helped define Wilson’s greatness have gone missing and Sunday’s 25-24 loss to Chicago was another example. After the Bears took the lead with 1:01 remaining, Wilson had two timeouts and needed 35 or so yards for a realistic attempt at a winning field goal.

Instead, Seattle committed three penalties and failed to convert a first down, Wilson’s last pass attempt not getting to Tyler Lockett.

There are a multitude of reasons why Seattle’s season has fallen apart and a team that won 12 games and a division title a year ago is guaranteed of finishing in last place in the NFC West. But their lack of fourth quarter and overtime execution is near the top of that list.

And while not all of that should fall on Wilson — he missed three games, two of which Seattle had chances in the fourth quarter or overtime — it all comes back to the franchise quarterback in some way. When trailing with less than 4 minutes to go this season, Wilson has a 70.7 passer rating, one TD and been sacked four times.

“I think that’s the biggest and the toughest part about this season,” Wilson said. “I think about all the great seasons, all the great moments we’ve had. A lot of times it’s — this season in particular it feels like we have the lead or whatever it may be, and we can finish better. We have to be able to finish better in my opinion on offense.”

With two games left in the regular season, the Seahawks somehow have one of the best run defenses in the NFL. It was on display again Sunday while holding Chicago running back David Montgomery to 45 yards rushing on 21 carries. Chicago had just 88 yards on 30 carries and take away Khalil Herbert’s 20-yard TD run and Seattle allowed 2.3 yards per rush on the other 29 attempts.

It should be troubling for the Seahawks that DK Metcalf may be the best pure athlete on the field yet completely disappears from the offense for stretches. Metcalf caught a 41-yard touchdown in the first quarter Sunday, then had one reception for zero yards and was shut out in the second half. Something had gone awry with the connection between Wilson and Metcalf.

Once thought a certain separation after this season, Rashaad Penny is making a strong case for having a role with the Seahawks in 2022. Penny posted his second 100-yard rushing game in the past three games against the Bears, running for 135 yards on just 17 carries. Penny averaged 7.9 yards per rush and was able to break out with runs of 32, 32 and 25 yards.

In the past four games, Penny has rushed for 346 yards and is averaging 6.4 yards per carry.

“My whole career has been derailed with small little injuries or small things,” Penny said. “Finally, for four games straight, I was able to just keep going and keep continuing for the last few weeks.”

Jason Myers continues to miss kicks at troublesome times for Seattle. Myers missed a 39-yarder in the fourth quarter on Sunday that would have given the Seahawks a 10-point lead. It was his second missed field goal this season inside 40 yards. The conditions with snow on the field and some wind weren’t optimal, but considering how good Myers was a year ago, this season has been a disappointment.

Seattle didn’t have any injuries of significance coming out of the loss and should be getting CB D.J. Reed, TE Will Dissly, RT Brandon Shell and DT Bryan Mone back at some point this week off the reserve/COVID-19 list. RB Alex Collins and DE Kerry Hyder Jr. returned from the virus list this week, but were inactive against the Bears.

25 — Twenty-five years ago was the last time Seattle finished in last place in its division until this year. The Seahawks went 7-9 in the 1996 season and finished tied for last in the AFC West with the Raiders.

Seattle’s home finale is Sunday against Detroit. Whether it’s the final home game for Carroll, Wilson or Bobby Wagner is one of the big unknowns. It seems likely there is some sort of overhaul about to take place in the offseason that would break up at least part of the most successful run in franchise history. If so, the game with Detroit could be the final opportunity for home fans to show their appreciation.