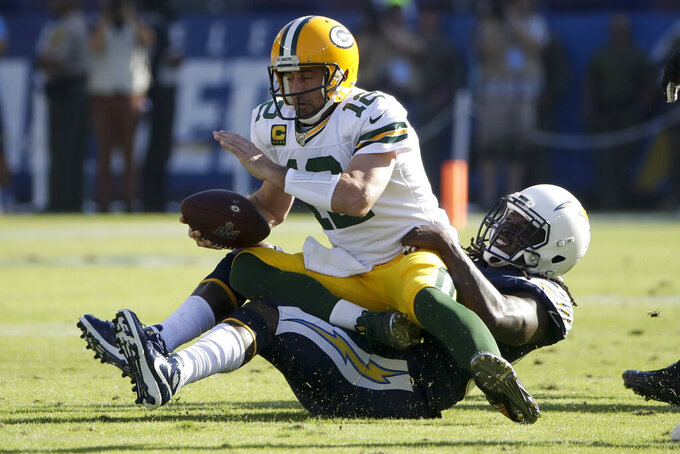 The Latest on Week 9 in the NFL (all times Eastern):

The name of the game this weekend?

Allen. All three of them.

Brandon Allen has guided Denver to a 24-19 win over Cleveland that not only made him an indelible memory in his first NFL start but produced an unprecedented occurrence in this unpredictable league.

Because Josh Allen quarterbacked Buffalo to victory over Washington and Kyle Allen did the same for Carolina against Tennessee, all three unrelated players named Allen were winners. According to the NFL, that was the first time in the 54-year Super Bowl era that three quarterbacks with the same surname not only started in the same week but won their respective games.

In 2000, Brad Johnson (Washington), Doug Johnson (Atlanta) and Rob Johnson (Buffalo) all started in Week 14. They all lost.

Seattle needed overtime to beat Tampa Bay 40-34, when Russell Wilson hit Jacob Hollister on a 10-yard touchdown pass on the opening possession of the extra period for his career-high-tying fifth score of the game.

Buccaneers quarterback Jameis Winston was nearly Wilson's equal, throwing for 335 yards and two touchdowns. Winston led the Bucs to the tying score in the final minute of regulation on Dare Ogunbowale's 1-yard run, but he never got his hands on the ball in overtime.

The Oakland Raiders have evened their record at the midpoint of their season, holding on to beat the Detroit Lions 31-24.

Matthew Stafford drove the Lions 76 yards in the final two minutes, reaching the 1-yard line for the final play of the game, but his last pass was incomplete.

Further down the California coast, the Los Angeles Chargers beat Green Bay 26-11 after dominating Aaron Rodgers and the Green Bay offense all afternoon. This was a rough day for the NFC North, because Minnesota lost 26-23 at Kansas City and Chicago was beaten 22-14 at Philadelphia earlier.

Browns receiver Odell Beckham Jr. seems to be a "shoe-in" for controversy these days. His cleats have been under scrutiny in Denver.

The CBS broadcast mentioned Beckham and fellow wide receiver Jarvis Landry needed to change their footwear or be at risk of not being allowed to play in the second half. Before the game, Beckham was spotted wearing a pair of clown-themed cleats. Jarvis Landry donned ones that were gold with an orange hue.

Beckham changed into a black pair with "OBJ" written on the side in white lettering. Landry came out after halftime wearing bright orange cleats.

Earlier this season, Beckham caused a stir by wearing a nearly $200,000 watch that the NFL told Beckham not to wear again because it violated a policy on "hard objects."

The Green Bay Packers are finally on the scoreboard against the Los Angeles Chargers, who have a surprising 19-3 lead at home near the end of the third quarter after a 54-yard field goal by Mason Crosby spoiled the shutout.

After averaging 409 yards and 33 points per game over their four-game winning streak, Aaron Rodgers and the Packers have hit a wall against the Chargers and their punishing pass rush.

Broncos fans are quickly warming up to Brandon Allen.

The newest Denver Broncos quarterback threw his first career touchdown pass on his second career drive, hitting Courtland Sutton for a 21-yard score early in the first quarter against Cleveland. Allen has replaced Joe Flacco, who's sidelined for the season with a herniated disk in his neck.

A fourth-year player out of Arkansas, Allen scrambled twice for 16 yards. Flacco had 20 yards rushing total over eight games.

The Miami Dolphins have their first win, against ex-coach Adam Gase and the New York Jets, no less.

With the 26-18 decision behind three touchdown passes by Ryan Fitzpatrick against one of his many former teams, the Dolphins matched the Jets with 1-7 records at their halfway point of this season.

That leaves the Cincinnati Bengals as the only winless team remaining in the league. They're 0-8 on their bye week.

The Kansas City Chiefs have ended their three-game home losing streak in dramatic fashion on a 44-yard field goal by Harrison Butker as time expired, beating the Minnesota Vikings 26-23.

Butker tied the game with a career-long 54-yard field goal with 2½ minutes to go, and then the Vikings went three-and-out. The Chiefs picked up their first victory without quarterback Patrick Mahomes.

In other early games:

— Buffalo bounced back from a loss to Philadelphia the previous week by beating reeling Washington 24-9. The Bills limited Adrian Peterson to seven yards on eight carries in the second half, after he reached the 100-yard mark in the first half. The Redskins fell to 1-8.

Chicago's offense is off to an abominable start at Philadelphia.

How about these ugly first-half numbers? Two first downs, nine total yards, and only six completions by quarterback Mitchell Trubisky in 24 attempts. His 24 passing yards dropped to just one net yard for the team after three sacks for a loss of 23 yards.

Entering this week, the Miami Dolphins had led for a total of 3 minutes and 46 seconds in their first four home games of 2019 combined.

Down 7-0 early, the Dolphins put together three consecutive touchdown drives and eventually settled for a 21-12 halftime lead over former coach Adam Gase and the New York Jets.

Ryan Fitzpatrick threw for all three scores for the Dolphins, who led for the final 6:14 of the half, or 2:28 more than they had led inside Hard Rock Stadium all season. The 21 points already ties a Miami season high for a full game in 2019.

Pittsburgh Steelers safety Minkah Fitzpatrick's fourth interception since joining the Steelers in mid-September was nearly one for the record books.

Fitzpatrick stepped in front of a pass by Indianapolis quarterback Brian Hoyer and returned it 96 yards for a touchdown, the second-longest regular season pick six in the club's 87-year history. The longest was by Martin Kottler, who returned an interception 99 yards in 1933, when the club was known as the Pittsburgh Pirates.

The longest pick six in team history remains linebacker James Harrison's 100-yard sprint to the end zone on the final play of the first half in the 2009 Super Bowl. Hoyer responded by leading Indianapolis on a touchdown drive to put the Colts up 16-13 at the break.

Adrian Peterson is off to a strong start at Buffalo, even if the rest of the Washington Redskins are not.

Peterson has topped 75 rushing yards for the fourth straight game, matching his longest streak since 2015. He has 10 carries for 101 yards at halftime, with the Bills leading the Redskins 17-6. The 34-year-old's streak has coincided with Bill Callahan taking over as interim coach after Jay Gruden was fired following an 0-5 start.

Peterson had 108 yards on 40 carries in four games under Gruden. He entered the game with 275 yards on 57 carries in his past three games.

Injuries are piling up in the first halves of the early afternoon games, with Indianapolis Colts quarterback Jacoby Brissett leading the list.

Brissett hurt his left knee, leaving the game at Pittsburgh early in the second quarter after one of his offensive linemen fell on his leg shortly after he released a pass. Backup Brian Hoyer came in and hit tight end Jack Doyle for an 11-yard touchdown pass to give the Colts a 10-3 lead as Brissett went into the medical tent for further evaluation.

Jackson drew a pass interference penalty on the first play of the game against Chicago and had one catch for five yards before he left with an unspecified injury. Jackson was back in the lineup for the first time in two months after suffering an abdominal injury.

Minnesota wide receiver Adam Thielen also had his return short-circuited. After missing the previous game with a hamstring injury, Thielen aggravated the injury in the first quarter at Kansas City after dropping a pass on the opening series for the Vikings. He was announced as questionable to return.

The Houston Texans are the second team in the AFC to six victories, after beating the Jacksonville Jaguars in London.

Deshaun Watson passed for two touchdowns, Carlos Hyde had 19 carries for 160 yards, and the Texans cruised past the Jaguars 26-3. They're 6-3, a step behind Indianapolis in the AFC South. The Colts take a 5-2 record into their game at Pittsburgh.

The Jaguars fall to 4-5. They committed four turnovers.

In a victory over Miami last Monday, Smith-Schuster became the first player to collect 12 100-yard receiving games before his 23rd birthday.

Adam Gase's return to Miami is going well so far for his New York Jets.

Getting a pair of third-down conversions and a fourth-down conversion as well, the Jets took the early lead on the Dolphins when Jamison Crowder caught a 12-yard scoring pass from Sam Darnold with 9:37 left in the first quarter.

Crowder had four catches for 50 yards on the drive.

The Jets came into the day as the NFL's worst team on third downs, and they were just 2 for 9 on fourth downs prior to this weekend.

Gase spent about a half-hour on his former home field at Hard Rock Stadium, greeting old friends from his Dolphins days, including Miami general manager Chris Grier. Dressed in a suit and cap, Gase was on the field about three hours before kickoff for several brief conversations and hugs before heading toward the visiting locker room. Gase was coach of the Dolphins from 2016 through 2018, going 23-25.

Deshaun Watson's best pass of the day so far won't count as one.

Hemmed in by a pair of would-be tacklers, the Houston quarterback flipped a backward toss to Carlos Hyde, who scampered 7 yards for a first down. That counts as a run.

It set up Houston's first TD of the day. The extra point was blocked, but the Texans lead the Jaguars 9-0 with 6 minutes left in the first half.

The Houston quarterback, who got kicked in the eye while completing a game-winning touchdown pass last week, looks no worse for wear to start the Texans' game in London against Jacksonville.

Midway through the first quarter, he is 6 for 9 for 68 yards. He has led Houston on an early scoring drive for a 3-0 lead.

Jacksonville's only drive so far has resulted in a punt.

The NFL's ninth Sunday opens with a dose of Minshew Mania across the pond and closes with the New England Patriots trying to keep their perfect season going.

Week 9 of the NFL brings with it a treat for early risers — the Jacksonville Jaguars, with quarterback Gardner Minshew, facing the Houston Texans in an AFC South matchup brought to Wembley Stadium in London. Kickoff is at 9:30 on the East Coast.

The Texans won the first meeting 13-12 in Week 2. That was Minshew's first start in place of Nick Foles, who broke his collarbone in the opener.

Foles is eligible to come off injured reserve after Sunday's game, and the big question is whether he'll take over for Minshew after Jacksonville's bye week.

In Sunday's final game, the Patriots bring their 8-0 record into Baltimore to face the Ravens. New England is allowing only 7.6 points per game and its defense has scored as many touchdowns as it has allowed (four).

Other games to watch: The Vikings visit Kansas City; ESPN is reporting that Patrick Mahomes will sit out again with his injured knee. The Colts take their division-leading 5-2 record into Pittsburgh (3-4), which is trying get back to the .500 mark.