The Latest: Rams' coach, GM do final prep for draft at home 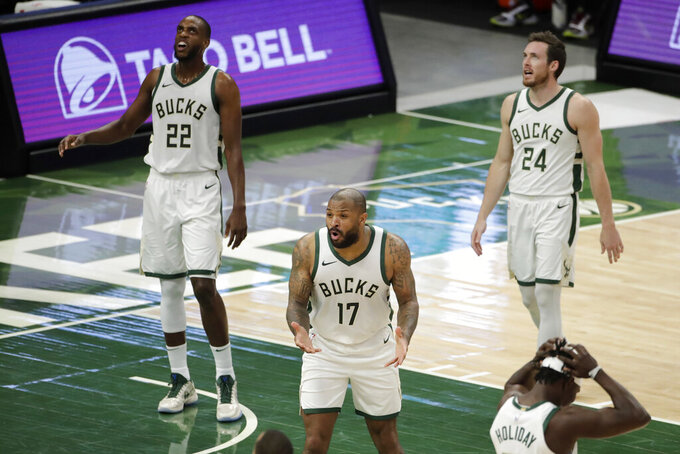 Milwaukee Bucks' P.J. Tucker (17) and teammates reacts to a foul call during the first half of the team's NBA basketball game against the Philadelphia 76ers on Thursday, April 22, 2021, in Milwaukee. (AP Photo/Aaron Gash)

Los Angeles Rams coach Sean McVay and general manager Les Snead are conducting their final draft preparations from their homes after they came into close contact with someone who tested positive for COVID-19.

McVay and Snead have both tested negative ever since the close contact was discovered Monday, and they intend to be together Friday at the Rams’ draft headquarters in Malibu when the team’s first pick of the draft comes up in the second round. Los Angeles doesn’t have a first-round pick for the fifth straight year.

“Neither of us is affected by this, but just following the protocols,” McVay said Tuesday. “We wanted to be smart, and hopefully as long as we remain asymptomatic and our tests come back negative, which that’s what has occurred over the last couple of days, we’ll be able to have fun.”

McVay and Snead are missing out on a couple of relaxing days at their new headquarters: The Rams have temporarily taken over an 8,800-square-foot Malibu estate with exceptional views of the Pacific Ocean. They’ll make their draft picks from the house, which will then be used to welcome new players and for other team business in the coming weeks.

The Milwaukee Bucks are offering COVID-19 vaccinations to fans attending their game Sunday against the Brooklyn Nets.

The Bucks announced Tuesday that any eligible fans attending the game can receive a first dose of the Pfizer COVID-19 vaccine from a mobile vaccination site at Fiserv Forum.

The Bucks are offering the vaccine in partnership with the Milwaukee Health Department. Fans who get their first dose at Fiserv Forum can schedule their appointment for a second dose with health department officials on site.

Tyrrell Hatton is the fourth player to have to withdraw from the Valspar Championship because of a positive test for the coronavirus.

Hatton is the No. 8 player in the world ranking, making him the highest-ranked player to test positive on the PGA Tour since world No. 1 Dustin Johnson in Las Vegas last October.

Sepp Straka, Will Gordon and Brice Garnett also tested positive this week and withdrew. It’s the first time four players have tested positive at a tournament since the PGA Tour returned from the pandemic in June.

Major League Baseball says 70% of players, on-field staff and support personnel have been fully or partially vaccinated for the novel coronavirus.

Baseball Commissioner Rob Manfred made the announcement during SporticoLive’s online discussion of its estimates to baseball franchise valuations.

In an email to The Associated Press, Manfred said his figure referred to all individuals defined as Tier 1 in MLB’s protocols, which includes players, on-field personnel such as managers, coaches and athletic trainers, plus essential personnel who need to be in close proximity. He said the 70% figure includes partial vaccinations for those receiving two-stage vaccines.

MLB told players on March 29 that COVID-19 protocol restrictions would be relaxed when 85% of Tier 1 personnel are vaccinated.

Sepp Straka has withdrawn from the Valspar Championship at Innisbrook after testing positive for the coronavirus.

Straka is the third player to test positive this week. Will Gordon and Brice Garnett withdrew after a positive test on Monday.

This is the fourth PGA Tour event since golf resumed in June with at three positive coronavirus test results, and the second time in the last six tournaments. Three players tested positive at the Honda Classic in March.

Boston’s pro sports teams could be playing in front of full-capacity crowds by August, according to new Massachusetts COVID-19 reopening guidelines.

Massachusetts Gov. Charlie Baker’s office announced Tuesday that capacity at large venues, such as indoor and outdoor stadiums, arenas and ballparks, can increase from their current level of 12% to 25% beginning May 10.

Those limits would then increase to 100% for all businesses on Aug. 1 as vaccination numbers continue to increase and the state enters its final phase of reopening. The state will also relax its mandatory mask order for some outdoor settings, effective at the end of April.

The shift means that the New England Patriots could begin their 2021 season with Gillette Stadium at full capacity. It also clears the way for the Boston Marathon, which last year was canceled for the first time in its 124-year history and shifted this year from its normal mid-April running to Oct. 11.

All of these changes are based on vaccination distribution and favorable public health data and could change.

The NHL is preparing to adjust playoff contingency plans if virus restrictions in Canada prevent travel between provinces or back and forth to the U.S.

“Where we play is going to depend on COVID, obviously -- we hope to keep everybody healthy -- and it’s going to depend on government regulations in terms of where we’re going to be able to travel our players and our teams and where we can’t,” NHL Commissioner Gary Bettman said Tuesday. “If we can’t travel in Canada, either as among the provinces or from the U.S. to Canada and back, we’ll make whatever adjustments we have to do to get the playoffs completed.”

Bettman called the situation “wildly unpredictable” and one that changes daily. The NHL kicked the can down the road on cross-border travel by having all seven Canadian teams play in the same division for the entire regular season and first two rounds of the playoffs.

The first time a Canadian team would need to play a counterpart in the U.S. would be in June, though there has been speculation about the first two rounds of the North Division playoffs happening in a quarantined bubble.

Canada has so far lagged behind in vaccinating people against COVID-19 compared to the U.S. Canada has fully vaccinated 2.71% of people, while the U.S. is just under 29%.

That disparity has prevented the NHL from relaxing virus protocols for teams that reach a certain threshold of vaccination, which is the case with the NFL, NBA and Major League Baseball that currently have all teams playing in the U.S.