Lions bounce back from another ugly loss to stun Cardinals 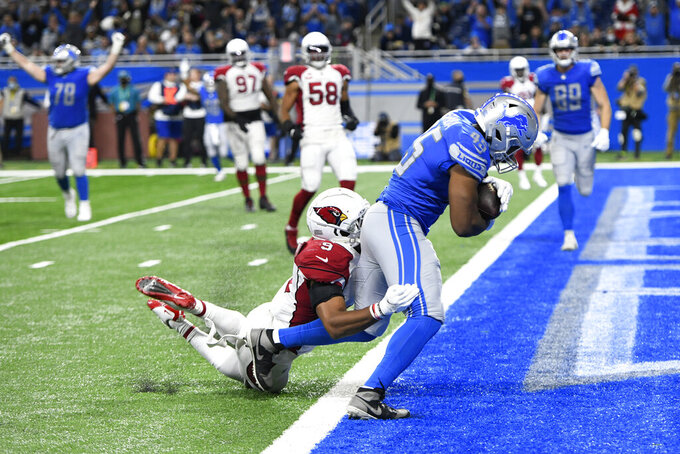 Detroit Lions fullback Jason Cabinda (45) pulls away from Arizona Cardinals inside linebacker Isaiah Simmons (9) to score during the second half of an NFL football game, Sunday, Dec. 19, 2021, in Detroit. (AP Photo/Jose Juarez)

DETROIT (AP) — A week ago, the Detroit Lions looked as if they had finished their season early.

After avoiding a winless season by beating the Minnesota Vikings on Dec. 5, the Lions went to Denver and were taken apart in a 38-10 loss. At 1-11-1, they looked as if they were a team playing out the string on another unsuccessful season.

The Lions finally played the type of game coach Dan Campbell imagined — tough on both sides of the ball — and stunned the Arizona Cardinals with a 30-12 victory on Sunday.

“That's what we've been trying to build here,” Campbell said. "We knew what we had to do and we did it in all three phases of the game. We knew we had to go all-out today, because if you play timid against the Cardinals, they will take you apart.

“We threw caution to the wind, knowing we might win or we might lose by 50, but that we'd play our game,"

Jared Goff, who threw three touchdown passes and averaged a season-best 8.3 yards per attempt, understood the magnitude of Detroit's upset.

“We don't match up with that team on paper — not at all,” he said. “This season has really tested us — losing as many games as we did teaches you how hard it is to win — and now we come out and beat arguably the best team in the league.

“You always love football — that's why you keep going when you are losing — but these are the days when it is fun.”

All of the coaches and players recognized a turning point in the third quarter — a moment when the Lions showed they weren't going to take another embarrassing pratfall.

The Cardinals kicked a field goal on the first possession of the second half, cutting Detroit's lead to 17-3, and on the ensuing drive, running back Godwin Igwebuike lost a fumble near midfield.

The crowd groaned, expecting to see Kyler Murray take advantage of the mistake and get Arizona within 17-10.

Two plays later, Amani Oruwariye dove in front of A.J. Green to intercept Murray's pass. As the Cardinals quarterback gestured angrily in Green's direction, Oruwariye jumped to his feet and returned the ball to the Arizona 6.

With the fans now roaring, Goff immediately hit fullback Jason Cabinda for a 6-yard touchdown and a 24-3 lead.

“We made a mistake and the defense picked us right back up,” offensive tackle Taylor Decker said. “That's what we've been looking for all year — a game where we are making plays on offense and defense at the same time.”

Cabinda's touchdown — the first of his NFL career — was special for his teammates and coaches. A linebacker at Penn State, his career started as an undrafted free agent with the Raiders. In 2019, he was waived in training camp and joined the Lions.

“He was playing defensive end on the scout team, so I played against him a lot,” Decker said. “I hated facing him, because he was always working so hard.”

After spending 2019 on special teams, Cabinda started getting some snaps as a blocking fullback in 2020, finishing the season with one carry and one reception. This season, he added tight end to his resume, thrilled his teammates with a 20-yard gain in Cleveland, then snuck out of the backfield to catch Sunday's touchdown.

“I didn't know that was his first touchdown — that explains why I saw Jared grab the ball and give it to him," Decker said. “He'll be glad he has that — when I scored my first touchdown, I went crazy and threw the ball into the stands.”

With the three-touchdown lead, the Lions defense took over, preventing Murray from sparking a comeback.

“We knew we had to hit (Murray) a bit and stay aggressive, but we had to do it as a team,” Campbell said. “If we start going after big plays, we lose contain on him and he kills us. We didn't do that — we bottled him up and stopped them.”