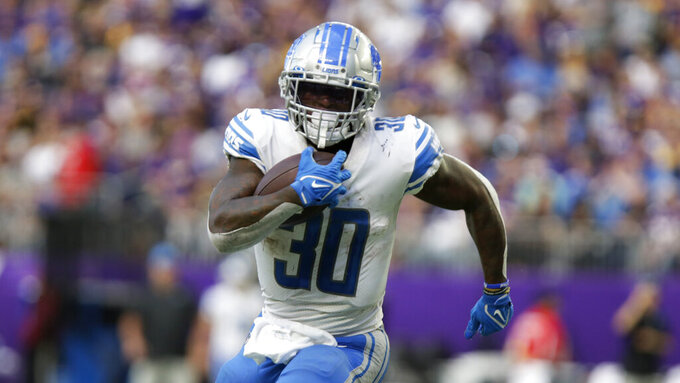 Detroit Lions running back Jamaal Williams (30) carries the ball up field during the second half of an NFL football game against the Minnesota Vikings, Sunday, Sept. 25, 2022, in Minneapolis. (AP Photo/Andy Clayton-King)

MINNEAPOLIS (AP) — After reaping the rewards of an aggressive approach all afternoon, Detroit coach Dan Campbell stopped himself late in the game at Minnesota.

Campbell made the cautious call to try a 54-yard field goal with the Lions leading by three points and the Vikings out of timeouts with 1:10 left, and he quickly regretted it.

Austin Seibert pushed the kick wide right. The Vikings then used a pair of 28-yard completions from Kirk Cousins to K.J. Osborn to complete their comeback for a 28-24 victory on Sunday.

The Lions moved 50 yards in six plays on their opening drive, but Seibert's 48-yard kick on fourth-and-6 bounced off the right upright. From then on, Campbell had his foot on the gas.

Mirroring the strategy by defensive coordinator Aaron Glenn that sent multiple extra pass rushers at Vikings quarterback Kirk Cousins, the Lions went for it six times on fourth down and converted four. Leading 14-7 on fourth-and-1 from their own 49 midway through the second quarter, the Lions turned the ball over on downs when Eric Kendricks knocked down a pass from Jared Goff to T.J. Hockenson. The Vikings went the other way in nine plays to score the tying touchdown.

Campbell wasn't deterred, feeling like the Lions needed to stay aggressive with a potent Vikings offense on the other side. The six fourth-down attempts were the most in the NFL this season. The four conversions matched the Los Angeles Chargers for the league high in 2022. They went 4 for 4 in a loss to Kansas City on Sept. 15.

Facing fourth-and-1 at the Minnesota 30 with 3:35 remaining, the Lions went for it again — only to have Jamaal Williams stuffed for no gain on a run off right tackle. That time, the defense responded by turning the Vikings over on downs.

The Lions moved 11 yards, took 1:22 off the clock — and set their coach up for the fateful call.

“I regret that decision, 100%. I really do. I hate it, and I do feel like I cost our team. I really do,” said Campbell, who also left Minnesota last year with a sour taste after successfully calling for the go-ahead 2-point conversion try with 37 seconds left only to have the Lions lose 19-17 on a last-play 54-yard field goal by the Vikings.

Goff said he considered trying to talk Campbell out of the field goal.

“I wish I would have. That was a tough spot, man. It’s a tough decision. Obviously, we make the field goal and we stop them on defense, there’s no question about it, right?” Goff said. “But it’s tough. It was fourth-and-4. You’re kind of in that ’tweener zone.' You can even discuss to punt it in some scenarios. But ultimately, I wish I would have said something to Dan.”

The Lions have put together under Campbell a far more dangerous team to face than they've been in recent years, but going home with a 1-2 record after another gut-punch loss is all they'll be thinking about this week.

“We’re right there. I can feel it. Seven years now I’ve been here and, like, we are right there," left tackle Taylor Decker said. “We are so close to being a really, really good team. But we've just got to get over the hump.”