Lions may look to bolster pass-catching options in draft 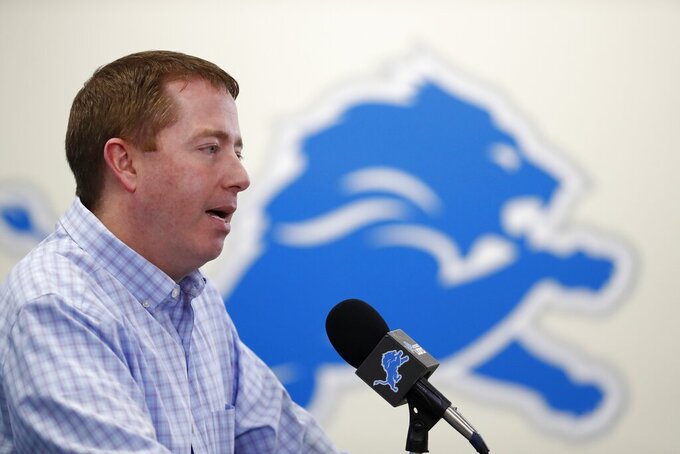 ALLEN PARK, Mich. (AP) — The Detroit Lions were the laughingstock of the league when they drafted wide receivers in the first round three straight years from 2003 to 2005, and none of them panned out for the franchise.

Detroit drafted tight ends in the first round twice over the past decade and ended up releasing both players.

Putting history aside, it looks as if the Lions need help at tight end and wide receiver during the draft after largely ignoring both positions in recent years. Detroit has the No. 8 selection overall and a total of nine picks, including a pair in each of the last two rounds.

Since 2014, Detroit has drafted only one receiver and one tight end and both picks were made two years ago.

Receiver Kenny Golladay , a third-rounder, has become a promising player while tight end, Michael Roberts, a fourth-round pick, has not been very productive.

The Lions can't be sure how receiver Marvin Jones will bounce back from a season-ending knee injury and they have only a short-term solution at slot receiver, signing 33-year-old Danny Amendola in free agency.

They attempted to address their desperate need at tight end this offseason, signing free agent Jesse James, but they don't seem to be satisfied.

"We're going to do the best we can to obviously try to improve that situation for us, whether it's through free agency or the draft," Lions coach Matt Patricia said.

"We're looking at those guys pretty hard and trying to make sure we get somebody in there that puts as much stress on the defense as possible."

Quarterback Joey Harrington was a bust as were receivers Charles Rogers and Mike Williams while Roy Williams had a decent career before being traded to Dallas.

Fans in the Motor City were not happy the franchise used first-round picks on tight end Ebron in 2014 and Brandon Pettigrew in 2009 and may not like it if general manager Bob Quinn drafts Iowa tight end T.J. Hockenson early in the first round.

"In all due respect to the fans out there, I can't take the fan sentiment into who I draft and who I sign," Quinn said.

Here are other things to watch when Detroit drafts:

Quinn sounds very interested in acquiring extra selections to slide down in the draft in exchange for the No. 8 pick.

"There's a couple of players right at the top that you would obviously would love to have," Quinn said. "I just don't think I have enough ammunition to get up there.

"I'd rather move back a couple spots."

If Quinn backs up his talk with action and moves down, he may draft a wide receiver such as Oklahoma's Marquise Brown, Mississippi's D.K. Metcalf or A.J. Brown.

Quinn has drafted seven players from the Southeastern Conference the past two years, including both first- and second-round picks. The trend may continue with him taking LSU linebacker Devin White and Alabama offensive lineman Jonah Williams in the first round.

Detroit reached double digits in losses last year in Patricia's debut season for the first time since 2012, giving it the No. 8 pick overall. Quinn had the No. 20 pick last year, No. 21 in 2017 and No. 16 three years ago in his debut as a general manager after helping the New England Patriots scout for prospects to take late in the first round for many years.

"This is unchartered territory for me," Quinn said. "I don't really love it."

The Lions addressed many needs in free agency , signing player such as defensive end Trey Flowers and cornerbacks Justin Coleman , to put any position in play during the draft.

"With what the board looks like and what our perceived needs are, probably a little bit more pushing toward the best available player," Quinn said.

"I think that's a good thing. Now, things can change between now and September. But going into it this year, we feel a little bit better about the depth at certain positions."

Quinn might not draft an offensive lineman in the first round for the third time in four years, but it seems likely he will take at least one player to add depth.

"It's a position we studied really hard," Quinn said. "Our offensive line coaches were out more than in previous years. There's good depth at that position from the first round all the way down to the fifth and sixth round, a little bit more on the interior."