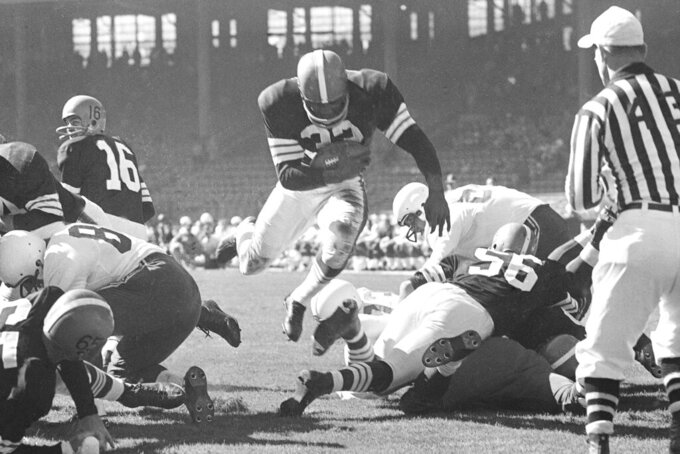 FILE - In this Oct. 12, 1958, file photo, Cleveland Browns fullback Jim Brown runs against the Chicago Cardinals for a touchdown in the first half of a football game in Cleveland. Brown scored three touchdowns in Cleveland's 35-28 win. Brown led the NFL in rushing eight times and was league MVP three times; finished with more than 12,000 yards rushing and 106 rushing touchdowns; and averaged 5.2 yards per carry. And he did all this in only nine seasons before retiring at age 30 to become an actor. (AP Photo/File) 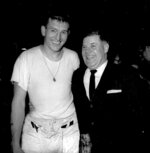 FRANCHISES: In 1950 the NFL merged with the All-America Football Conference and the Cleveland Browns, San Francisco 49ers and Baltimore Colts joined the league. Also, the New York Bulldogs became the New York Yanks, but folded after the 1951 season. The Dallas Texans played their only season in the NFL in 1952 before moving to Baltimore in 1953 and becoming the Colts after the AAFC team that had joined the NFL folded. The league would enjoy franchise stability for the rest of the decade.

TOP TEAMS: The two most successful teams of this era have never even reached the Super Bowl, yet alone won it. The Cleveland Browns won the NFL title in their first year in the league (1950) and added championships in 1954 and '55. They lost in the championship game four times overall in the decade, including three consecutive years from 1951-53. The Detroit Lions won NFL titles in 1952, 1953 and 1957, beating the Browns each time. The Baltimore Colts won championships in 1958 in "The Greatest Game Ever Played" and repeated in 1959, beating the New York Giants both years.

TOP PLAYERS: Otto Graham. The Browns quarterback led them to the title game in their first five years in the NFL. Including the AAFC, he won seven total championships, was a seven-time first-team All-Pro and an all-league QB in nine of his 10 seasons. He was inducted into the Pro Football Hall of Fame in 1965.

Jim Brown. A member of the NFL's 75th Anniversary team who entered the Hall of Fame in 1971, Brown led the NFL in rushing eight times and was league MVP three times; finished with more than 12,000 yards rushing and 106 rushing touchdowns; and averaged 5.2 yards per carry. And he did all this in only nine seasons before retiring at age 30 to become an actor.

Johnny Unitas. "Johnny U" also was a member of the NFL's 75th Anniversary team and was the winning quarterback of the "Greatest Game Ever Played," the 1958 NFL championship game. Unitas was a three-time MVP and five-time All-Pro who threw at least one TD pass in 47 straight games for the Baltimore Colts. He was inducted into the Hall of Fame in 1979.

Bobby Layne. He led the Lions to three NFL titles, including throwing a late TD pass to beat Graham and the Browns 17-16 in 1953. Layne was a member of 1957 NFL champions, the Lions' most recent title, and entered the hall in 1967.

Dick "Night Train" Lane — The hard-hitting cornerback had 68 interceptions in 14 seasons, mostly with the Chicago Cardinals and Detroit Lions in the 1950s and 60s. Lane entered the hall in 1974 and earned his nickname from his teammates from the then-popular song "Night Train" during his first training camp with the LA Rams in 1952.

TOP COACHES: Paul Brown founded both of Ohio's pro football teams in the Browns and Bengals. The Hall of Famer led the Browns to three NFL titles and had only one losing season in 17 years. He entered the hall in 1967 and founded the Bengals a year later, coaching them for their first eight seasons.

Weeb Ewbank is the only coach to win titles in the NFL and American Football League (AFL). He won NFL championships in 1958 and 1959 with the Baltimore Colts before upsetting the Colts in Super Bowl 3 with the Jets in 1969.

MEMORABLE GAMES: "The Greatest Game Ever Played" — The 1958 NFL championship game between the Baltimore Colts and New York Giants was the first overtime game in league history. Alan Ameche's touchdown gave the Colts a 23-17 victory. The thrilling game was televised nationally and is credited with sparking the NFL's rise in popularity.

After the All-America Football Conference (AAFC) merged with the NFL, the Browns played in the first game of the 1950 season against the Philadelphia Eagles in a matchup of the defending champions of both leagues. The Browns rolled to a 35-10 win as Otto Graham threw for 346 yards and three touchdowns, and the team ended the season by winning the NFL championship.

GAME CHANGERS: Getting games on TV on a more consistent basis in the 1950s was a significant factor in the NFL becoming the country's dominant sport. Its leaders understood the importance of the growing medium better than other sports at the time.

In 1950, the NFL merged with the All-America Football Conference (AAFC) and Cleveland coach Paul Brown brought his innovative style to the league. Among the things he is credited with: game plans; playbooks; the use of game film in scouting; starting the practice of calling plays from the sideline; having a radio transmitter inside the quarterback's helmet for play calling; the helmet facemask; and keeping his players together at a hotel the night before a home game as well as before a road game.

FUN FACT: Hall of Famer Raymond Berry had 12 receptions for 178 yards and a touchdown in the Colts' overtime win over the Giants in 1958. The 12 receptions set a record for a NFL title game that stood for 55 years. It was the last time the championship game needed overtime until Super Bowl 51, when the New England Patriots beat the Atlanta Falcons 34-28.