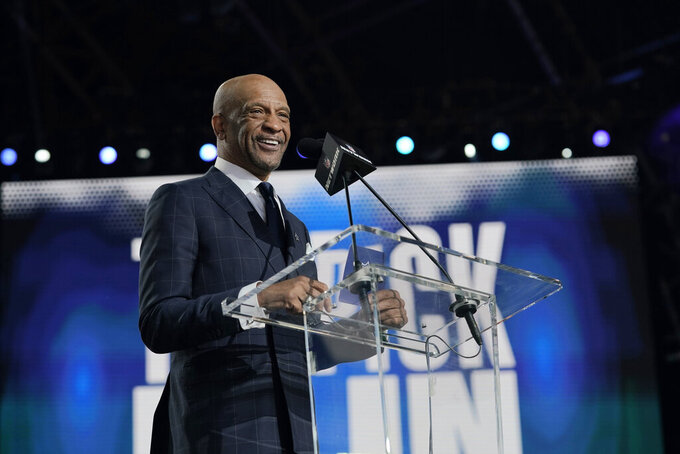 FILE - Drew Pearson announces the Dallas Cowboys pick during the second round of the NFL Draft on Friday, April 30, 2021, in Cleveland. Pearson is headed to the Pro Football Hall of Fame as part of the class of 2021 after the disappointment of not getting in a year earlier. The former Cowboys receiver joins 1970s-era offensive teammates Roger Staubach and Tony Dorsett in the hall. (AP Photo/Steve Luciano, file) 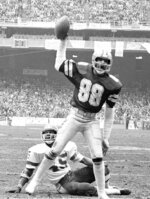 DALLAS (AP) — Drew Pearson celebrated his entry into the Pro Football Hall of Fame with all three first-ballot members of the class of 2021: Peyton Manning, Calvin Johnson and Charles Woodson.

The “original 88” of the Dallas Cowboys figured it didn't much matter anymore that he had to wait almost 40 years.

A year earlier, Pearson wasn't very happy at all.

The receiver who caught the Hail Mary from Hall of Fame quarterback Roger Staubach was a finalist for the special 13-member centennial class in 2020, and invited family, friends and television cameras to his house for the announcement.

When he didn't make it, Pearson tried to hide his anger and disappointment, but couldn't. A year later, he was alone when word came that he was the only finalist in the senior category, all but a guarantee that Pearson was in.

Pearson didn't pull a T.O. Upset that it took longer than he thought it should have to get in, receiver Terrell Owens shunned the enshrinement ceremony in Canton three years ago. Pearson will be there on Sunday for his.

“You saw raw emotion, raw disappointment, raw heartbreak,” Pearson said of his 2020 reaction. “Thirty minutes after that, I was OK. I wasn’t mad at the Pro Football Hall of Fame. How could you get mad at them? I kept my faith and was patient.”

The 70-year-old Pearson and Cliff Harris, the former Dallas safety who did make the centennial class, are the first undrafted Cowboys among their 15 players in the Hall of Fame.

Pearson started his college career as a quarterback at Tulsa after replacing Joe Theismann, who went on to win a Super Bowl with Washington, at South River High School in New Jersey.

Expected to be the starter going into his junior season, Pearson asked his coaches to switch to receiver because he thought that was his best chance to make it to the NFL. They agreed, and he caught 55 passes over two seasons.

“It got quite lonely out there at wide receiver,” Pearson said. “At quarterback, you’re touching the ball on every play. But I knew if I was going to play professional football, that would be my natural position.”

After giving Pearson a $150 signing bonus, player personnel director Gil Brandt made sure the rookie had an apartment next to the club's training facility.

Pearson remembers being able to see the parking lot from his balcony and making sure he figured out what Staubach's car looked like. They both like to tell the story of all the balls Pearson caught from Staubach during that 1973 offseason.

“We're out there at the beginning and there's this guy from Tulsa that said he was a former quarterback,” Staubach said with a chuckle. “I could see after a few weeks, this guy is going to be a good football player.”

Pearson had 489 catches in the regular season before retiring in 1983, but his most famous was one of his 67 playoff grabs — the Hail Mary from Staubach to beat Minnesota during the 1975 season.

The 50-yarder in the final seconds of a 17-14 victory in the playoff opener — Vikings fans will forever say he pushed off against cornerback Nate Wright — led to the first of Pearson's two Super Bowls, a 21-17 loss to Pittsburgh.

“Drew made big play after big play in so many games,” said Staubach, who made the hall in 1985 and will introduce Pearson. “Without the hands he had, he wouldn't have made that play. He almost caught it right on his hip.”

Pearson had 7,822 yards and 48 touchdowns receiving over 11 seasons before the NFL became a pass-first league. He isn't in the club's top three for career catches, yards or touchdowns, but teammates always believed he belonged in the hall with his 1970s-era offensive teammates, Staubach and star running back Tony Dorsett.

“I had him scout wide receivers for me after his career was over,” said Brandt, who helped build the first Dallas dynasty with coach Tom Landry and general manager Tex Schramm and joined them in the hall two years ago. “I offered him a full-time job because he was so good at what he did. It was like a guy that had been doing it all his life.”

Pearson isn't the first “88” of the Cowboys to make the hall — that's Michael Irvin. He might not even be the best-known “88” — that could be Dez Bryant, who has the club record for touchdown catches with 73.

Pearson also isn't the first in the hall from his high school — that's South River lineman Alex Wojciechowicz, class of 1968 after 13 seasons with Detroit and Philadelphia from 1938-50.

Just like the long wait, none of that matters to Pearson now that he's in.

“Each and every one of these Hall of Famers that are still with us, Cowboy Hall of Famers, that reached out to me and said, ‘Welcome to the team,’” Pearson said. “A few of them said, ‘It’s about time.’ A couple of them said, ‘The team just got better now that you’re back on it.’ So that’s pretty cool.”

And probably worth the wait in gold, as in jacket.