Manfred puts off decisions on incentives for minority hires 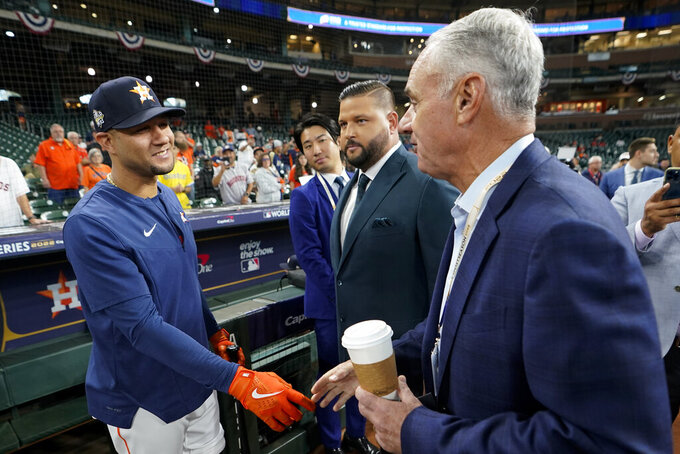 PHILADELPHIA (AP) — Baseball Commissioner Rob Manfred is putting off any decisions on instituting incentives for teams to hire minorities for top positions.

There are just two Black managers in the major leagues and six recent openings have been filled by white men, with one vacancy remaining. There are no Black players on the World Series rosters for the first time since 1950, shortly after Jackie Robinson broke the Major League Baseball color barrier.

The NFL instituted a rule in March requiring each team to employ a woman or a member of an ethnic or racial minority as an offensive assistant coach. In 2021, the NFL started giving the previous team of a minority employee who has been hired by another club as its head coach or general manager compensation picks in the next two drafts, or three drafts if two minority employees are hired for those positions by another club or clubs.

“We’ve talked about a variety of things,” Manfred said Monday after Game 3 of the World Series between Houston and Philadelphia was postponed by rain. “We’re going to wait through the end of this season and we’ll talk about, when the hiring season is over, what, if anything, we should do differently."

Then-baseball Commissioner Bud Selig instituted a rule in 1999 mandating teams consider minorities when hiring for general manager, manager, assistant general manager, scouting director and minor league director. A provision was added last fall stating when a non-diverse person is promoted within an organization, MLB expects a diverse person to be hired or promoted to fill the vacancy.

The White Sox have the last remaining opening.

“We have as recently as last year amended provisions of the Selig rule to try to make it more effective,” Manfred said. “We continue to work hard with our pipeline program to identify candidates that we can present to the clubs that provide them a choice in terms of diversity. We are adding new programs all the time in this area to make sure that we have great candidates.

"At the end of the day, they’re individual club decisions. And all we can do is make sure that we do everything we can to make sure that we have qualified candidates that we’re presenting the clubs. They’re going to make their decisions about that.”