Manning seemingly talking about Daniel Jones as much as self 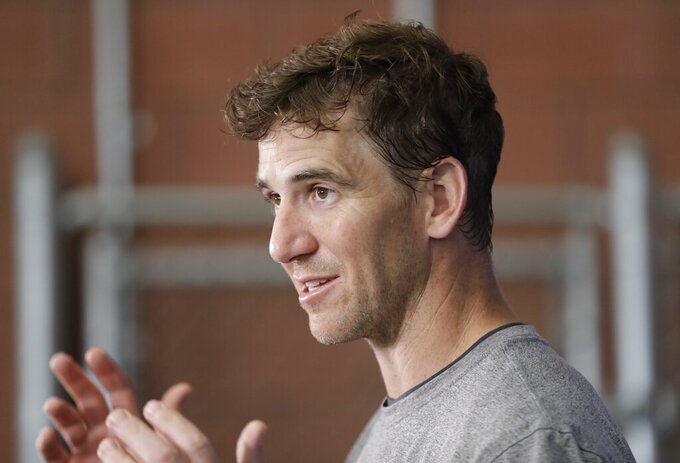 EAST RUTHERFORD, N.J. (AP) — Two-time Super Bowl MVP Eli Manning is answering as many questions about his own game as he is about the future of Daniel Jones, his heir apparent as Giants quarterback.

Jones, the sixth pick in the NFL draft in April, is going to replace the 38-year-old Manning at some point.

If you listen to Giants general manager Dave Gettleman, he favors the Kansas City Chiefs' model. They drafted Patrick Mahomes in 2017 and he sat behind Alex Smith for a year before taking over this past season and winning both the NFL MVP and Offensive Player of the Year awards.

That would give Manning a 16th season as the Giants' quarterback and a chance to get New York back to the playoffs for only the second time since 2011.

Jones, however, has looked good in preseason workouts. Granted no one's either wearing pads or threatening to hit him, but his passes have been on target and he offered the added dimension of being able to run, something Manning has rarely done.

So the timetable is uncertain, and Manning gets peppered with questions about Jones. He politely answers them and makes it clear the presence of the Duke quarterback has not changed his approach to the game.

His competition isn't Jones. It's trying to be his best.

"I think you are driven because it's football and you have a job to do and you want to win games," Manning said. "That's what drives you, going out there and winning. You work hard to do that and you deserve to win games and for the team to win games. That's what driving you to work hard in the offseason and compete every day in practice."

Manning said Jones has done a good job, is throwing the ball well and is learning the offense.

"It's a lot thrown at you, especially going against NFL defenses," Manning said. "A lot more looks, a lot more blitzes, a lot more protection adjustments and different things. You are going to make every mistake there is; I think at that stage it's just trying not to repeat the same mistakes."

For now, Manning is working on fundamentals and trying to get to know some of the new guys such as receiver Golden Tate. He said he is feeling good and he likes what he has seen from the team coming off a 5-11 season.

Manning had his moments in the mandatory minicamp practice Wednesday, connecting with Rhett Ellison, Bennie Fowler and Tate in the red-zone drills.

Jones has been impressive, particularly with his ability to move and extend plays.

Offensive coordinator Mike Shula said Jones would be the No. 1 selection in most pick-up games. Coach Pat Shurmur adds he has seen him improve in every practice.

"He displays, to me, that he gets it," Shurmur said. "He is becoming more and more comfortable with what we are doing offensively. He is putting his skills to the test, and making plays in every practice."