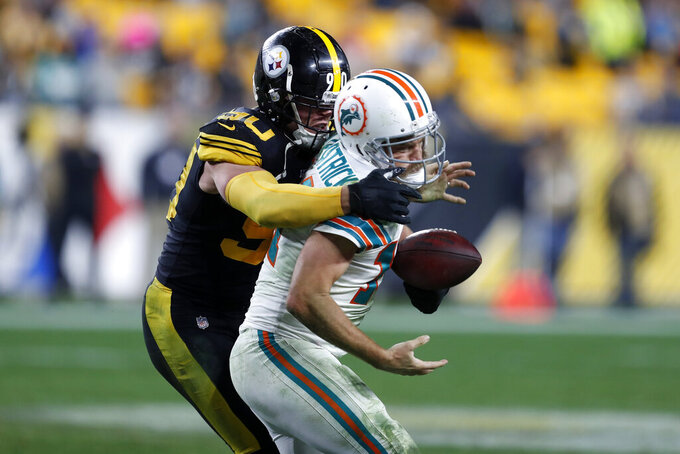 MIAMI (AP) — Ryan Tannehill is throwing touchdown passes for the Titans. Matt Moore is doing the same with the Chiefs. Ndamukong Suh is plugging the middle for the Buccaneers. Kenyan Drake is making a strong first impression with the Cardinals.

Oh, and Adam Gase is doing lots of losing with the Jets.

Ladies and gentlemen, your most recent Miami Dolphins' playoff team.

The Dolphins play the Jets on Sunday, with Gase's fingerprints on both teams. He led Miami to the postseason as a rookie head coach in 2016.

But for both Gase and the Dolphins, it has since been a spiral that seems to be accelerating of late.

Gase is in his first year as coach of the Jets, who are 1-6 and enduring a soap opera season. The Dolphins are 0-7 under Brian Flores, hired after they fired Gase in January.

It has been 50 years since a Game 8 matchup in the NFL featured two teams with such a lousy combined record. Here are things to know about the least of the AFC East:

The 2016 Dolphins looked like a team that might be built to last. But three seasons later, Tannehill and other stars are gone, and only six players from the '16 active roster are still suiting up for Miami.

"Crazy, right?" tackle Jesse Davis said. "Football years. It seems pretty long ago for sure, but it really hasn't been that long."

Since the Dolphins' playoff loss to end the 2016 season, they're 13-26. A rebuild this year ordered by owner Stephen Ross led to a dismantling of the roster.

"I can't worry about what could have been," Gase said. "I've got to worry about this game."

Flores echoes that sentiment. The rookie head coach is still looking for his first victory.

"This team is getting closer to getting to the point to where we can pull out a ballgame," Flores said.

Sam Darnold is looking to bounce back after two consecutive subpar games.

The Jets quarterback has thrown just one touchdown pass with seven interceptions in that span. And, it hasn't just been rough on the field for Darnold.

He was also the subject of countless internet jokes when he said he was "seeing ghosts" against New England while wearing a microphone for ESPN's "Monday Night Football" broadcast. Darnold needed the toenail on his left big toe removed the day after that game after being stepped on during a play. Against Jacksonville last Sunday, Darnold sprained his left thumb, an injury he will likely have to deal with the rest of this season.

And all that came after he missed three games while recovering from mononucleosis.

"I think, for me, there are some instances where I definitely see myself trying to do too much," Darnold said. "I just have to continue to play the game and let the game come to me. And if I do that, I think I'll be OK."

Several of the Jets' best players were mentioned this week in trade talks, but only defensive lineman Leonard Williams was dealt — to the Giants. Safety Jamal Adams drew the most interest, with teams calling general manager Joe Douglas about his availability.

Adams said he was "hurt" that Douglas and the Jets even entertained offers after the two chatted last week, and the safety told the GM and Gase he preferred to stay put. Now, Adams' future with the franchise is uncertain beyond this season.

"When you see certain things like that and you hear about it and you get calls," Adams said, "you're in shock a little bit."

Before last Sunday's game at Jacksonville, Jets owner and CEO Christopher Johnson was caught on video talking to fans of the teams, including one who said he drove nine hours to make it to the game.

"Hopefully the team will actually show up this week," Johnson said.

Douglas was asked about Johnson's comments, which the GM said he was only made aware of earlier Tuesday.

"My take was he seemed like he was a person like a lot of people in this building: passionate and frustrated about where we are at 1-6," Douglas said. "I can tell you my feelings on Christopher haven't changed one bit. Frankly, he deserves better than 1-6, and we're going to do everything we can to make sure we're not in this position again."

The Dolphins' longest run this year has been 19 yards, and they've had only one completion of more than 35 yards.

That's one reason they're averaging 11 points a game.

"We've got to get to where we're making more explosive plays, and we have the guys to do it," quarterback Ryan Fitzpatrick said. "Chunk plays certainly make it easier."