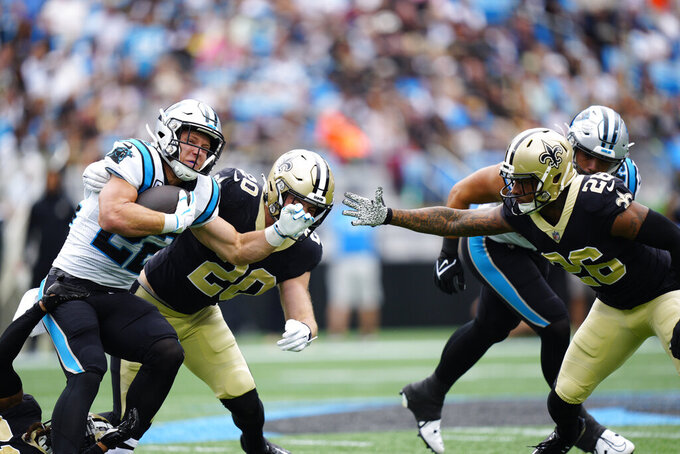 New Orleans Saints linebacker Pete Werner (20) attempt the tackle against Carolina Panthers running back Christian McCaffrey (22) during the first half of an NFL football game against the, Sunday, Sept. 25, 2022, in Charlotte, N.C. (AP Photo/Jacob Kupferman)

CHARLOTTE, N.C. (AP) — While the Carolina Panthers finally got their first victory of the season with a 22-14 win over the New Orleans Saints, the passing game remains a major issue.

Baker Mayfield has struggled since his arrival in Carolina, completing just 51.9% of his passes for 550 yards with three touchdowns and one interception through three games. He has been sacked nine times and hasn’t played with same swagger he had during his four seasons with the Cleveland Browns.

So while the Panthers (1-2) were busy celebrating the end of a league-long nine-game losing streak on Sunday, the reality is there is an enormous amount of work that needs to be done for this team to take a step forward offensively.

“I am going to look back at the tape and not be real happy with how I played, considering the third down conversions and our passing game," Mayfield said after his first win with the Panthers.

“We will take wins when we can get them, there’s no doubt about that. Just need to capitalize."

Mayfield said he doesn't think the issues are the result of the scheme.

The Panthers are converting just 27% of their third downs, which is 30th in the league.

Mayfield has a meager QB rating of 45.6 on third downs, completing just 11 of 20 passes for 145 yards with one interception and no touchdown passes.

“We thought we would be more explosive in the intermediate areas. We weren’t,” Panthers coach Matt Rhule said after the win against the Saints. “There is a lot of work to be done offensively to get this thing to the level that we want.”

The running game. Christian McCaffrey ran for 108 yards against the Saints, his second straight 100-yard game after failing to reach that mark in any game in 2020 and 2021. McCaffrey appears to be back and in great shape after missing 23 of 33 games the previous two seasons with injuries. After being limited to 33 yards rushing in the season opener against the Cleveland Browns, McCaffrey has now upped his yards per carry to 4.9 and again appears to be a force on offense.

“To win a football game in the NFC South and have Robbie and D.J. each have one catch, I wouldn’t have thought that would happen,” Rhule said. "It has to get better next week.”

WR Laviska Shenault. Acquired in a late preseason trade with the Jacksonville Jaguars, Shenault was inactive the first two games but made an immediate impact after getting a jersey for the first time on Sunday. Shenault took a short reception from Mayfield in the flat and used his speed to race 67 yards for a touchdown, helping the Panthers build a 19-7 lead in the fourth quarter. Shenault was activated primarily to replace Chuba Hubbard as the team's kick returner, but made an impact in the passing game with two catches for 90 yards despite limited reps. He said he feels like “it's just the beginning” of what he can do.

WR Terrace Marshall Jr. The Panthers' second-round draft pick last year is beginning to look like a bust. His production was limited as a rookie because of injuries and Marshall has lacked the ability to get open in practices and fallen behind Shi Smith on the depth chart. Marshall didn't catch a pass the first two games of the season and was a healthy scratch on Sunday as the Panthers went with Shenault instead.

Marshall's days in Carolina appeared to be numbered unless the former LSU star is able to convince coaches he can play at this level.

The Panthers came out of Week 3 fairly healthy. Cornerbacks Donte Jackson and C.J. Henderson both sustained neck injuries during Sunday's win, but were able to return and finish the game.

3 — Number of takeaways for the Panthers defense on Sunday after not having any in the first two games of the season.