McKinney gets chance to be a defensive leader for Giants 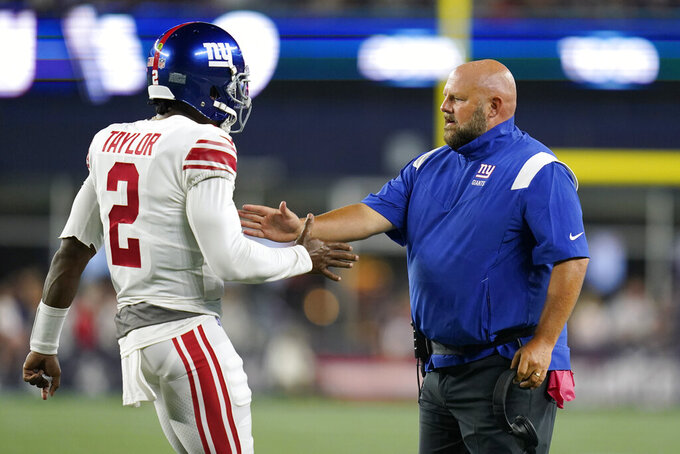 EAST RUTHERFORD, N.J (AP) — Xavier McKinney had a breakout season with the New York Giants in 2021 and there's more on his plate this year.

Defensive coordinator Wink Martindale has given the third-year safety from Alabama the responsibility of relaying the defensive calls from the sideline to the team. Players who have that role wear a green dot on their helmets.

For most teams, the calls are made by a middle or inside linebackers. Martindale thinks safeties can handle the job because they can see everything in front of them.

McKinney, who led the team with five interceptions in 2021 and was third on the team with 93 tackles, has not had a problem adding the job.

“I see it as just things that I’ve already done before that I have to do again,” said McKinney, who had the same job in college. “I don’t see it as a lot, it’s obviously an honor to be in this position that I’m in and I expect to seize the opportunity and take full advantage of it.”

The one thing he has struggled with in New York is losing. The Giants have had five straight losing seasons, posting records of 6-10 in 2020 and 4-13 last season. Alabama rarely lost more than one or two games a season in his tenure.

Brian Daboll, who is less than three weeks away from his first NFL regular-season game as head coach, was undecided Friday whether his starters will play in the preseason finale on Sunday against the Jets.

Running back Saquon Barkley is ready either way, and he is looking forward to the opener against the Titans in Tennessee on Sept. 11.

A year ago, he was coming off an ACL injury and struggled most of the year playing behind a weak line. The line has improved, Barkley is healthy and the new offense has shown signs of being much better.

“I’m always down for whatever coach wants me to do,” Barkley said. “That was his decision. We haven’t spoken about what’s coming this weekend. But my mindset’s just coming in ready and prepared to work.”

Barkley carried five times in the preseason opener against the Patriots and didn't play last weekend against Cincinnati. He had several carries in the joint practice with the Jets on Thursday.

"Right now I’m just happy, enjoying life, enjoying the game I love, and I just want to go out there and have fun,” said Barkley, who rushed for 1,307 yards as a rookie in 2018, scoring 15 touchdowns, 11 rushing.

The Giants got some good news Friday. Outside linebacker Azeez Ojulari, who led the team eight sacks as a rookie in 2021, pulled a calf muscle running sprints Thursday after practice. It was not the hamstring that sidelined him at the start of camp. His status is day to day, Daboll said.

NOTES: The Giants signed wide receiver Travis Toivonen and placekicker Ryan Santoso and released safety Andrew Adams. New York also waived wide receiver Bailey Gaither after he failed his physical. ... Santoso will kick with Graham Gano sidelined by a concussion sustained Sunday against Cincinnati. Santoso played in one game for the Panthers and three for the Lions last season. He also kicked in three games for Tennessee in 2019. ... Adams signed with the Giants as a free agent on July 26 after spending the previous four seasons with the Tampa Bay Buccaneers. ... Daboll said LG Shane Lemieux (toe) may not be ready for the regular-season opener against Tennessee on Sept. 11. Max Garcia, Devery Hamilton and third-round draft pick Josh Ezeudu are competing for the job. ... Daboll said WRs Sterling Shepard and C.J. Board; Lemieux, Ezeudu and fellow OLs Ben Bredeson and Garrett McGhin; CB Rodarius Williams; S Dane Belton and Gano will not play against the Jets.