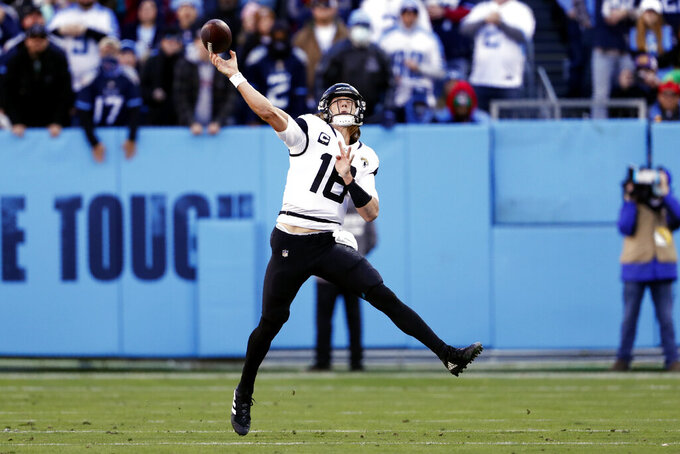 JACKSONVILLE, Fla. (AP) — Urban Meyer’s tenure in Jacksonville is nearing a new low, and no one could have thought that was possible 2 1/2 months ago.

The Jaguars (2-11) were shut out for the first time in more than a dozen years Sunday, a 20-0 drubbing at Tennessee that showed just how far the team’s offense has regressed in the past seven weeks.

Although it’s unlikely billionaire owner Shad Khan would fire Meyer after one season — Khan despises the notion of paying people to not work and has been adamant he finally “got it right” by hiring Meyer — he has to, at the very least, have growing concerns about his latest debacle in Jacksonville.

The Jaguars have failed to top 200 total yards in three games, including in back-to-back weeks, and now have two five-game skids. Neither had happened in the team's previous 26 years.

They have the league’s longest current losing streak to go along with a 15-game road skid and eight consecutive losses in AFC South play.

The only thing that’s improved since Meyer took over in January is the team’s defense, and Meyer has mostly left that side of the ball to longtime NFL assistant and first-time coordinator Joe Cullen.

Meyer’s first year with the Jaguars will be remembered for public embarrassments and weekly confusion about what’s happening in games and seemingly inside the locker room.

Khan and Meyer had a one-on-one meeting in Nashville for roughly 15 minutes following the latest loss, the team’s 32nd in its past 37 games.

“Our focus is to finish the season strong and to make whatever adjustments we have to make to get this thing cooking,” Meyer said.

Khan and Meyer talk regularly, but this one probably had a different tone. After all, it was the first time in Khan’s decade of ownership that Jacksonville failed to score and came after a week filled with reports, all citing unnamed sources, that detailed internal strife between Meyer and his staff.

Anyone who questions the validity of those reports needs only to look at the postgame handshake between Meyer and Titans coach Mike Vrabel. Vrabel jogged past Meyer and barely said anything as they briefly shook hands. It was a cold exchange considering they spent two years together (2012-13) at Ohio State.

“I’m not hard. I’m honest," Meyer said. “I’ve done this a long time, and I’m very demanding and honest with coaches. If we’re struggling, let’s get this thing fixed."

Vrabel also shut down a question about Meyer after Tennessee’s win in Jacksonville in October.

That came a week after Khan publicly admonished Meyer for viral videos that showed Meyer touching a woman’s backside at an Ohio bar. The incident happened one night after the coach chose to stay behind following a road game at Cincinnati.

Many thought Khan might fire Meyer then. Instead, the owner reprimanded the three-time national championship-winning college coach and said he “must regain our trust and respect.”

Meyer appears to be losing both by the week.

The Jags sacked Ryan Tannehill four times and held Julio Jones to four receptions for 33 yards in his return from a hamstring injury.

Jacksonville’s offensive line is a mess and a big reason Lawrence was pressured into so many mistakes. Guard Andrew Norwell, one of the highest-paid players on the team, was flagged three times for holding. Fellow guard Ben Bartch also struggled against Titans standout Jeffery Simmons.

Cornerback Tyson Campbell has been the lone bright spot for Jacksonville’s rookie class. Campbell has 50 tackles and seven pass breakups, including an interception. He has started seven consecutive games and looks like a potential long-term upgrade from 2020 first-round pick CJ Henderson, who was traded to Carolina in late September.

Second-year receiver Laviska Shenault has been plagued by drops and poor routes much of the season. He has 52 catches for 505 yards and no touchdowns. He and fellow receiver Laquon Treadwell ran into each other late in the game, drawing laughter from Tennessee safety Kevin Byard.

“It’s tough for them boys over there,” Byard said.

C Brandon Linder (back spasms) could return Sunday against Houston. Linder has missed 39 games in seven seasons in Jacksonville, sitting out often enough that the Jags should be in the market for a replacement in 2022.

7 — number of consecutive losses to Houston. The Texans dominated Jacksonville in the season opener, winning 37-21 after leading 34-7. Houston also has won 13 of 15 in the series.

The Jaguars have a chance to end three losing streaks: a five-game skid overall, seven straight to Houston and an eight-game slide in the AFC South.