Mistake-prone Jags lose 6th straight, this one without Meyer 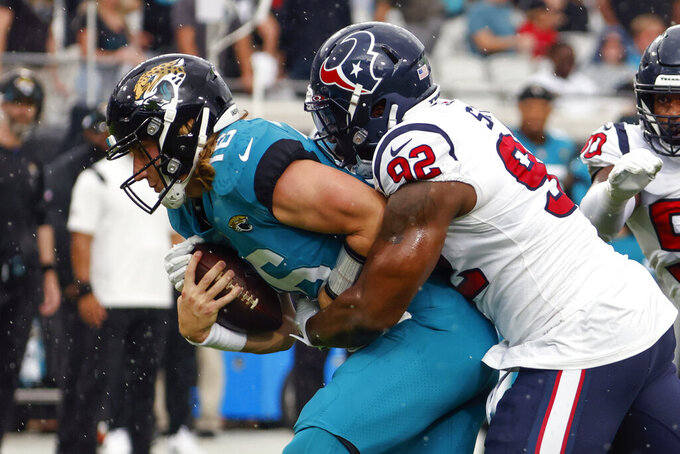 JACKSONVILLE, Fla. (AP) — The Jacksonville Jaguars found another way to lose, this time without Urban Meyer.

The Houston Texans scored 17 points off three glaring special teams miscues in a 30-16 victory against skidding Jacksonville on Sunday, three days after firing Meyer and ending one of the most tumultuous coaching tenures in NFL history.

The Texans (3-11) kept their opening drive alive when Jaguars defensive end Adam Gotsis was flagged for illegal use of hands during a punt. Tremon Smith returned a kickoff 98 yards for a touchdown later in the first quarter. And Jacksonville failed to adequately cover a punt in the second quarter that gave Houston great field position that led to a 52-yard field goal.

And for an offensively challenged team that's got a small margin for error, those kinds of mistakes are nearly impossible to overcome. Jacksonville also dropped five passes, missed several wide-open receivers and settled for two field goals in the red zone.

Rookie Trevor Lawrence completed 22 of 38 passes for 210 yards. He didn't have a turnover but was sacked three times.

“There was opportunities to make plays,” Jaguars interim coach Darrell Bevell said. “We didn’t make some of them, and we’ve got to catch the ball, we’ve got to throw the ball. We’ve got to protect better, and we’ll be able to find the end zone. It’s just on us to continue to improve.”

Defensive meltdowns and offensive ineptitude have been issues all season for Jacksonville (2-12), which lost its sixth consecutive game and 10th straight in AFC South play.

But this one was mostly decided on special teams, highlighted by Smith's long return. He somehow escaped five defenders near the 30-yard line – Jaguars safety Rayshawn Jenkins broke his right ankle trying to make the tackle — before coasting the rest of the way. It was Houston’s first kickoff return for a score since Oct. 4, 2009.

“It was just nice to see,” Texans coach David Culley said. “Tremon, he is so explosive back there and he’s been close before."

The Texans finished with 281 yards, with 43 coming on Davis Mills’ second of two TD passes to Brandin Cooks. It sealed the victory.

The Jaguars have lost eight straight to Houston, which swept the series for the ninth time in the last 11 years. Houston won for the 14th time in 16 meetings despite playing without seven starters, including five defenders.

Thanks to Detroit’s victory against Arizona, the Jaguars now are in line to have the No. 1 draft pick for the second straight year. The dreadful and drama-filled season has proven Jacksonville needs all sorts of help — on offense, defense and now even special teams.

Meyer had taken a hands-on approach to Jacksonville's special teams. Bevell, meanwhile, spent most of the week in his usual role of getting the offense organized. He tried to rally the team after Meyer's stunning dismissal and tried to make everything as normal as possible.

The end result was awful.

“(Bevell) brought some energy,” defensive tackle Malcom Brown said. “Guys were happy. The result is still not what we want so it clouds everything at the end of the day. He came in with a lot of energy, gave some good speeches. We’re all feeling it.”