MLB tells Athletics to explore relocation if no new ballpark 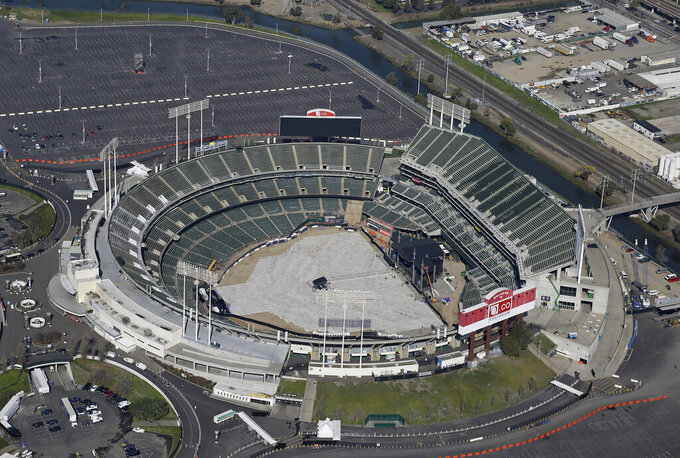 FILE - This Feb. 5, 2016, file photo shows the Oakland–Alameda County Coliseum, home to the Oakland Athletics, in Oakland, Calif. Major League Baseball instructed the Athletics to explore relocation options as the team tries to secure a new ballpark it hopes will keep the club in Oakland in the long term. MLB released a statement Tuesday, May 11, 2021, expressing its longtime concern that the current Coliseum site is “not a viable option for the future vision of baseball.”(AP Photo/Eric Risberg, File)

OAKLAND, Calif. (AP) — Major League Baseball instructed the Athletics to explore relocation options as the team tries to secure a new waterfront ballpark it hopes will keep the club in Oakland long-term.

MLB released a statement Tuesday expressing its longtime determination that the current Coliseum site is “not a viable option for the future vision of baseball.”

“MLB is concerned with the rate of progress on the A’s new ballpark effort with local officials and other stakeholders in Oakland,” MLB said. “The A’s have worked very hard to advance a new ballpark in downtown Oakland for the last four years, investing significant resources while facing multiple roadblocks. We know they remain deeply committed to succeeding in Oakland, and with two other sports franchises recently leaving the community, their commitment to Oakland is now more important than ever.”

A’s President Dave Kaval remains hopeful of a deal, but there is a time crunch.

“We’re going to immediately start working with the league on exploring other markets and working hand in hand with them to identify which ones make the most sense and pursuing that right away,” Kaval told The Associated Press in a telephone interview. “We need to keep our options open. People know, we can’t even keep the lights on here at the Coliseum.”

In November 2018, the A's announced they had found a waterfront location for their new ballpark that would cost more than $1 billion, with picturesque views toward San Francisco, the Bay Bridge and Port of Oakland. The goal had been to open in 2023, but now, even if approved by Oakland's City Council this summer it would not be ready until 2027.

“We’re hopeful that our really exciting plan for a waterfront ballpark that’s privately financed will be taken up by the city council,” Kaval said. “I think it’s something that is kind of a once-a-generational opportunity to re-imagine the waterfront. We're going to continue to pursue that and we’re still hopeful that that could get approved, but we have to be realistic about where we are with the timelines.”

Early this year, Kaval asked the City Council to make a decision via a vote before it breaks for the summer on a $12 billion privately funded ballpark project and major community development plan featuring $450 million in community benefits, but the team has been given no indication anything is imminent.

“We have an offer in front of the city council that we have not got a response on,” Kaval said. “So I think we're still doing what we can to pursue the waterfront ballpark, which we think is a dynamic and exciting project but we are running out of time here in Oakland at our existing facility and we need to look at other options to see what might be possible.”

The team's lease at the Coliseum is up in 2024, but the aging venue where the A's have played since 1968 is already having lighting and flooding issues.

A’s owner John Fisher said in a statement Tuesday he will honor MLB’s instructions but remains committed to continuing to pursue the waterfront ballpark proposed for construction in the city’s Howard Terminal location, close to the popular Jack London Square neighborhood.

“The future success of the A’s depends on a new ballpark,” Fisher said. “Oakland is a great baseball town, and we will continue to pursue our waterfront ballpark project. We will also follow MLB’s direction to explore other markets.”

The A's, who previously proposed and withdrew plans for ballparks in Fremont and San Jose, are hopeful MLB's pressure might help push that process with the city.

“We share MLB’s sense of urgency and their continued preference for Oakland. Today’s statement makes clear that the only viable path to keeping the A’s rooted in Oakland is a ballpark on the waterfront," Mayor Libby Schaaf said.

"We have made great strides with the Governor’s certification and release of the EIR. Now, with the recent start of financial discussions with the A’s, we call on our entire community – regional and local partners included — to rally together and support a new, financially viable, fiscally responsible, world class waterfront neighborhood that enhances our city and region, and keeps the A’s in Oakland where they belong.”

The proposed ballpark site is about 6 miles from the Coliseum and there is no mass transit. The A’s and city have said they plan to build a gondola that would go from the waterfront area of ballpark over Interstate 880 to downtown. Kaval said the gondola is approved and undergoing environmental review.

“We continue to play in Oakland until something changes," A's manager Bob Melvin said before a game in Boston.

The Athletics have moved twice since the franchise was founded in Philadelphia, arriving in Kansas City for the 1955 season and in Oakland for the 1968 season.

Just two MLB teams have moved in the past half-century: The expansion Washington Senators became the Texas Rangers for the 1972 season and the Montreal Expos transformed into the Washington Nationals for the 2005 season.

The Braves also moved twice, switching from Boston to Milwaukee for the 1953 season and to Atlanta for 1966.

There was a flurry of switches in the 1950s and ’60s: the St. Louis Browns became the Baltimore Orioles (1954), the Brooklyn Dodgers moved to Los Angeles for 1958, the New York Giants moved to San Francisco for 1958, the original Washington Senators became the Minnesota Twins (1961) and the Seattle Pilots became the Milwaukee Brewers (1970).

Manfred says MLB will not consider expansion until the A's and Tampa Bay Rays get new ballparks.

Rays owner Stu Sternberg had been working to build a ballpark in Tampa’s Ybor City area but abandoned that plan in December 2018. MLB's executive council gave the Rays permission in June 2019 to explore splitting their home schedule between the Tampa Bay area and Montreal after their lease at the Trop expires at the end of the 2027 season.

In Oakland, the A's are the last professional team. The NBA's Golden State Warriors moved to San Francisco before the 2019-20 season and the NFL's Raiders relocated to Las Vegas last year.

“It is unfortunate that a couple teams have left,” Melvin said. “Certainly we don't want that to happen, and I don't think anything that's been said today would suggest it's going to, I think it's just giving MLB and the organization a few more options to maybe look elsewhere.”