Moore staying with Cowboys, set to call plays for McCarthy 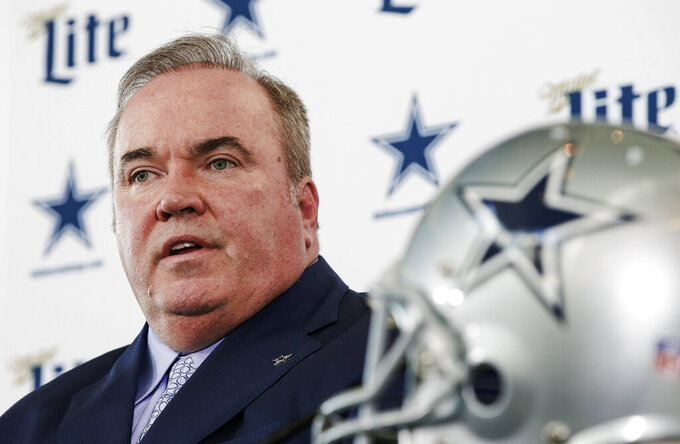 FRISCO, Texas (AP) — Kellen Moore is staying as offensive coordinator for the Dallas Cowboys, and new coach Mike McCarthy says the plan is for Moore to continue calling plays.

Moore was promoted to his current job in the final season under former coach Jason Garrett, whose contract wasn't renewed after the Cowboys fell short of expectations in a make-or-break season for him.

While McCarthy doesn't have his entire staff in place, he confirmed many of the hires in a meeting with reporters Thursday, a little more than a week after he was introduced as Garrett's replacement.

The likelihood of Moore calling plays is significant because McCarthy filled that role for most of his 12-plus seasons as Green Bay's coach. McCarthy said he was impressed with Moore's work and his relationship with quarterback Dak Prescott.

The 30-year-old Moore just finished his second season as a coach after retiring as a player with the Cowboys. Moore was Prescott's backup before becoming his position coach in 2018.

Nolan is one of two former San Francisco head coaches on McCarthy's staff. The other is defensive line coach Jim Tomsula, who is taking the other title Marinelli held. Tomsula coached the defensive line the past three seasons in Washington.

Former Miami coach Joe Philbin, who was interim coach of the Packers after McCarthy was fired in 2018, is replacing Marc Colombo as offensive line coach.

Skip Peete is returning to the Cowboys as running backs coach after serving in that role from 2007-12. Peete was with the Los Angeles Rams the past four years. Lunda Wells, who was with the New York Giants, will be tight ends coach.

Scott McCurley, who was on McCarthy's staff all 13 seasons in Green Bay, will coach linebackers.

The Rams had already announced that special teams coach John Fassel was leaving for the same job with the Cowboys.