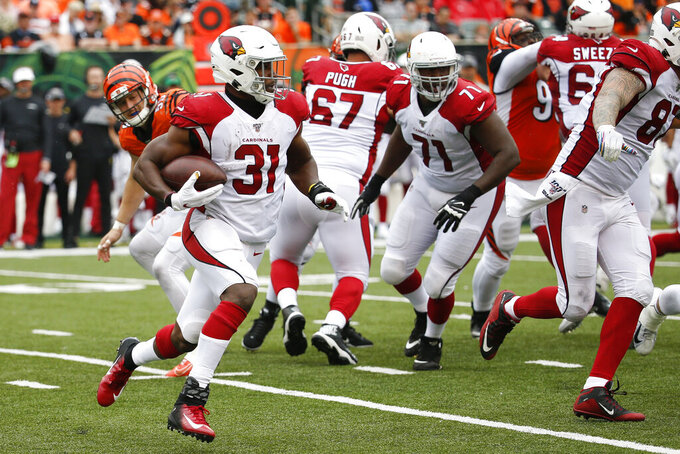 Arizona Cardinals running back David Johnson (31) runs the ball in the second half of an NFL football game against the Cincinnati Bengals, Sunday, Oct. 6, 2019, in Cincinnati. (AP Photo/Frank Victores)

TEMPE, Ariz. (AP) — The Arizona Cardinals are an exciting but frustrating team that can look dominant and clueless within the same few minutes of football.

On Sunday, they celebrated their first win of the season.

And that's a big step in the right direction.

The Cardinals earned a 26-23 road win over the Cincinnati Bengals thanks to a 31-yard field goal from Zane Gonzalez as time expired.

It was a much more interesting outcome than it probably should have been — Arizona had a 23-9 lead in the fourth quarter before Cincinnati tied it with two late touchdowns — but after a month of frustration the Cardinals (1-3-1) are finally winners.

"For me personally, I felt like we needed to win that game, just for the morale of the team," rookie quarterback Kyler Murray said. "We felt like we were pretty close the last couple of weeks, and to finally put it all together somewhat — I felt good about today."

Murray was very good, completing 20 of 32 passes for 253 yards. He also led the team with 93 yards rushing on 10 carries, including a 6-yard touchdown.

But the most encouraging part of his performance was the lack of big mistakes. He was only sacked once and didn't have any interceptions. Instead of forcing plays, he made good decisions.

"My two favorite plays were one screen he threw away and one tempo naked (bootleg) he threw away," coach Kliff Kingsbury said. "And that's progress."

The offense continues to look great in the middle of the field and was especially effective on the ground. The Cardinals gained 266 yards rushing, which was the most for the team in a game since 2011.

Arizona had a season-high 514 total yards, which was just the eighth time since 1970 that the team gained 500-plus yards.

Murray continues to progress in his first season and running back David Johnson has been very effective as both a runner and receiver. Gonzalez bounced back from an early miss to make his final four field goals.

Arizona had a much better balance between run and pass against the Bengals, but finding the end zone is still a struggle. Kingsbury jokingly said he was open to suggestions during Monday's press conference.

"That's been our deal all year. I have to do a better job," the coach said. "It starts with me. We can excuse some things, but it starts with the play calls, and I'll continue to work on that."

RB Chase Edmonds: It was a good game for Johnson's backup, who scored a 37-yard touchdown midway through the fourth quarter that gave the Cardinals the 23-9 lead.

The 5-foot-9, 203-pound Edmonds has earned more touches as the season's progressed.

"He's earned it," Kingsbury said. "His practice habits, what we've seen every time he's in. We're better when he and David are on the field. We've developed more of a role for him and that should continue."

It wasn't all bad, but Cincinnati's fourth-quarter comeback showed there will be ups and downs. Still, Kingsbury didn't sound too concerned.

"They didn't blink when it got tough," Kingsbury said. "They were shooting their shot. That's what we wanted to see."

Johnson fought back tightness throughout Sunday's game, but still came up with big plays in the fourth quarter. Kingsbury said they would manage the injury throughout the week. ... WR Christian Kirk (ankle) missed the Bengals game after getting hurt against the Seahawks the week before. Kingsbury said he "liked the progress" but wasn't sure if he'd practice or play this week. ... CB Tramaine Brock (shoulder) will also be monitored during the week of practice.

3 — Murray (93 yards), Johnson (91) and Edmonds (68) all had good days running the ball against the Bengals. It was the first time since 1975 that the franchise had three players with 60-plus rushing yards in the same game.

There's the potential for the Cardinals to get on a little run. Their next two games are at home against the Atlanta Falcons (1-4) and on the road against the New York Giants (2-3).

Arizona is trending down the right path. If the offense can score more touchdowns instead of settling for field goals, the positive momentum could continue.