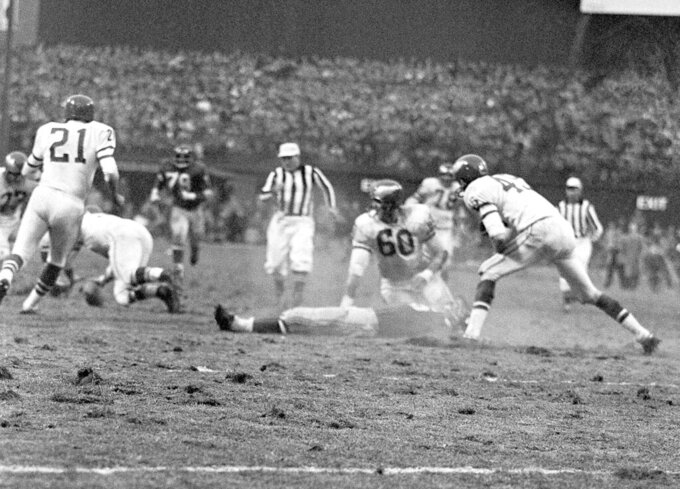 FILE - In this Nov. 21, 1960, file photo, New York Giants' Frank Gifford lies on field as play continues after he was knocked unconscious by Philadelphia Eagles' Chuck Bednarik (60) as Gifford was carrying the ball in the fourth quarter of a football game at New York's Yankee Stadium. The NFL revealed 70 of the 100 greatest plays in league history on Friday night with a TV special produced by NFL Films that has everything from spectacular offensive performances to defensive gems. In balloting conducted by The Associated Press, 68 media members on a nationwide panel voted for their top 100. Among those disclosed is the brutal hit applied by Bednarik on Gifford in 1960. (AP Photo/File)

The NFL revealed 70 of the 100 greatest plays in league history on Friday night with a TV special produced by NFL Films that has everything from spectacular offensive performances to defensive gems. In balloting conducted by The Associated Press, 68 media members on a nationwide panel voted for their top 100.

Post-merger, the list features everything from John Elway's helicopter spin in the Super Bowl after the 1997 season (No. 33) to Dan Marino's fake spike (No. 38) in 1995. It also includes Mario Manningham's clutch reception to spark the Giants' comeback to beat the Patriots in the title game for the 2011 season and Deion Sanders' punt return for a TD the first time he touches the ball for Atlanta in 1989, which Sanders describes in detail.

"So I make it down to Atlanta, had a couple days of practice," Sanders recalled. "I didn't start, but they knew punt returning is instinctive, so you got to start me returning punts. So I had a small chat with the punt return team: 'Hey guys, just block seven. I got four, all right?'"

"They kicked it and I dropped it," Sanders added. "I took my eyes off it and I dropped it, and when I dropped it, that was the best thing that happened. Because when you drop a ball, the punt team tends to migrate together, get out of their lanes, and they all came tight. All I had to do was making it to that corner and hit it. And when I hit it, I hit."

The eclectic list ranges from the very old to the very new: outstanding recent plays such as Aaron Rodgers' Hail Mary to beat Detroit in 2015 (No. 52) to Derrick Henry's 99-yard run (No. 89) and the Miami Miracle (No. 42) last year made the cut.

"Until I got in the end zone, I mean honestly, I'm sitting before you all and I still don't believe it," Kenyan Drake said during interviews after the improbable conclusion to a 34-33 win over New England. Drake finished off a 69-yard reception-and-lateral marvel that some have dubbed "The Drake Escape."

Dozens of Hall of Famers are highlighted, as well. Along with Van Buren and Bednarik, Elway and Marino and Sanders, how about Gale Sayers' 85-yard punt return in 1965 (No. 34), followed one spot later by Tony Dorsett's 99-yard touchdown sprint in 1983?

Walter Payton's 1977 run through the Chiefs is 37th, with another Canton-inductee running back, Earl Campbell's 1978 power rush against the Rams at No. 39.

Tracy Porter's pick-6 against Peyton Manning that clinched the Saints' only Super Bowl win in February 2010 is 32nd. Denver's Jeremiah Castille stripping Cleveland's Earnest Byner to cause "The Fumble" in the 1987 AFC title game came in 49th.

The top 30 will be announced next Friday night.