NFL prospect Rashan Gary is a pioneer with own sports agency 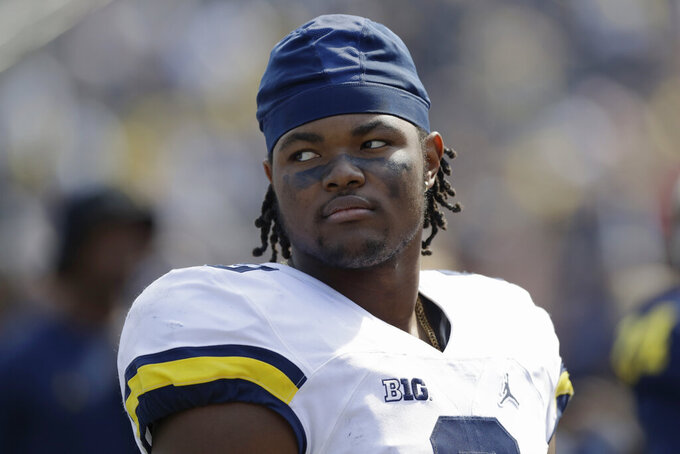 In this April 15, 2017, photo, Michigan defensive end Rashan Gary is seen during the Michigan spring football game in Ann Arbor, Mich. Former Michigan star Gary is the CEO of his own sports agency, fulfilling a vision he had as a high school star in New Jersey. The defensive end has already recruited one NFL prospect to Rashan Gary Sports. And, he hopes to land more players from MLB, the NBA and NHL by promoting the agency as a place professional athletes can take advantage of their power. (AP Photo/Carlos Osorio)

ANN ARBOR, Mich. (AP) — Rashan Gary is living his dream as the founder and CEO of his own sports agency.

The defensive end, projected to be one of the top picks in the NFL draft, has fulfilled a vision he had as a high school star in New Jersey and developed in his mind the past three years at Michigan.

"I always had a dream of playing in the NFL and leaving a legacy," Gary said in an interview with The Associated Press. "The older I got, I understood that football is not forever. This is a step to take care of my family in the long run. Starting this agency is a way I can definitely do that in my years on the football field and the years when I'm not on the football field."

He has already recruited one NFL prospect to Rashan Gary Sports . And, he hopes to land more players from Major League Baseball, the NBA and NHL by promoting the agency as a way athletes can make the most out of their earning potential.

"It's going to change the game," Gary told The AP. "Now, players know the power they have and taking this step is big for me, my family and my dream."

Gary's mother, Jennifer Coney-Shepherd, is the president of the five-person agency. Certified agent Ian Clarke will negotiate Gary's contract and will be paid as an employee of the agency instead of getting a percentage.

"I don't think this has ever happened," said Gil Brandt, the NFL's top draft consultant and a former personnel director for the Dallas Cowboys. "Everybody has a new, creative idea and this is the latest one.

"The first contract in the NFL is relatively simple with the pay pretty much pre-determined whether you're drafted 13th or 107th. I'm guessing some street-smart guy told him about this idea to set up his own agency to keep more of his money."

Rashan Gary Sports executives, though, insist Gary came to them with the pioneering idea.

"This pre-dates all of us," said Dante Simpson, who heads marketing and branding for the agency. "Ian didn't pitch this. I didn't pitch this. He and his mother talked to other agents and marketing folks about this vision. He went after the talent he wanted to secure to be the first to do this."

Gary is expected to be among the top 10 picks in April and he may be able to boost his stock even more by displaying exceptional speed and strength at the league's scouting combine. The 6-foot-5, 281-pound Gary is training for the opportunity to show how fast, agile and powerful a player his size can be in Texas with Michael Johnson Performance, a partner of the agency.

While Gary is focused on running and lifting, he did get former Bowling Green defensive back Montre Gregory to sign with his agency .

Gary was a two-time Academic All-Big Ten honoree, majoring in general studies while working on a marketing and sales track certificate from Michigan's business school. He began focusing on his future after his injury-stunted season ended with a loss to Ohio State. He declared for the draft, skipping the Wolverines' bowl game and his senior season.

He was a second-team preseason All-American, but a shoulder injury limited him to nine games. Gary had 44 tackles — including seven for losses — and 3½ sacks last season. He was an All-Big Ten player as a sophomore when he had 66 tackles, including 12 for losses and six sacks. Gary, who is from Plainfield, New Jersey, signed with Michigan as the top-rated high school player in the country.

Gary could have followed the popular path and signed with industry leaders such as Creative Artists Agency or Drew Rosenhaus, but chose to take a chance on his idea.

"Rashan Gary Sports is set up for players to take ownership of their intellectual property," Clarke said. "Our model, which we'd rather keep quiet for now, helps players with their finances on the front end."

The agency has just two clients, Gary and Gregory, but plans to have more NFL players in the future while also competing for business with agents in other sports.

"We're looking to be in all major league sports," Clarke said. "There are agents we're having conversations with and it's just a matter of securing some of those deals."