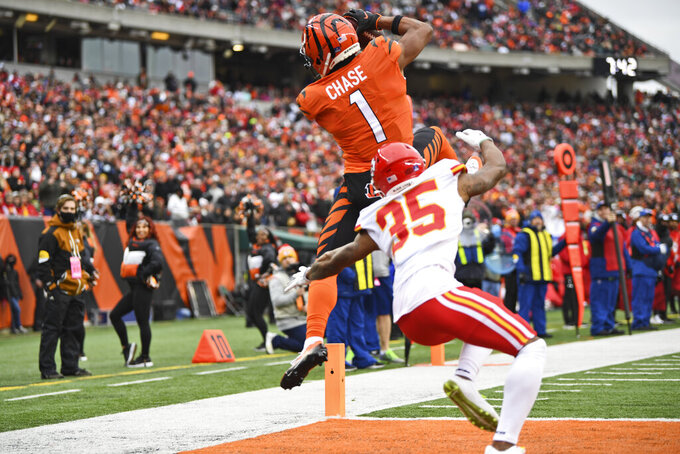 Cleveland at Pittsburgh, 8:15 p.m. EST. The AFC North looked like one of the better divisions in football earlier in the year, but has descended into mediocrity with Pittsburgh (7-7-1), Cleveland (7-8) and Baltimore (8-8) hovering around .500. Cincinnati (10-6) clinched the division by beating Kansas City on Sunday. Steelers quarterback Ben Roethlisberger has strongly hinted this will be his last season, which would make this his final game at Heinz Field. The Steelers have a slim chance to make the playoffs but would open on the road. Roethlisberger has never lost to the Browns at home in the regular season, going 12-0 — part of his 24-2-1 overall record against Cleveland. The Browns have lost three of four and were eliminated from playoff contention Sunday when the Los Angeles Chargers beat Denver. Cleveland will have some key players — including DE Jadeveon Clowney, RB Kareem Hunt, C JC Tretter, LT Jedrick Wills and K Chase McLaughlin — back from the COVID-19 reserve list.

— Tom Brady, Buccaneers, completed 34 of 50 passes for 410 yards, three touchdowns — including the winner with 15 seconds left — and an interception in Tampa Bay's 28-24 win over the New York Jets.

— Matthew Stafford, Rams, went 26 of 35 for 309 yards, two touchdowns — including the winning score in the final minute — and two interceptions in Los Angeles' 20-19 victory at Baltimore.

— Aaron Rodgers, Packers, completed 29 of 38 passes for 288 yards and two touchdowns before he was relieved midway through the fourth quarter by Jordan Love in Green Bay's 37-10 blowout of Minnesota.

— Mac Jones, Patriots, was 22 of 30 for 227 yards, three touchdowns and no interceptions in New England's 50-10 rout of Jacksonville. With victory assured, Brian Hoyer relieved him on the Patriots' final two possessions.

— Rashaad Penny, Seahawks, had 25 carries for 170 yards and two touchdowns in Seattle's 51-29 win over Detroit.

— Devin Singletary, Bills, had 23 carries for 110 yards and two touchdowns in Buffalo's 29-15 win over Atlanta.

— Rhamondre Stevenson, Patriots, had 19 carries for 107 yards and two touchdowns in New England's 50-10 win over Jacksonville.

— Ja'Marr Chase, Bengals, had an NFL rookie-record and Cincinnati franchise-record 266 yards on 11 catches with three touchdowns in the Bengals' 34-31 win over Kansas City.

— Cooper Kupp, Rams, had six receptions for 95 yards and a touchdown in Los Angeles' 20-19 win at Baltimore.

— Noah Fant, Broncos, had 92 yards receiving and a touchdown on six catches in Denver's 34-13 loss to the Los Angeles Chargers.

— DK Metcalf, Seahawks, had three touchdown receptions among his six catches for 63 yards against Detroit.

— Andre Roberts, Chargers, returned a kickoff 101 yards for a touchdown in Los Angeles' 34-13 win over Denver. He also had a 47-yard return of the Broncos' other kickoff.

— Brandon McManus, Broncos, made a career-long 61-yard field goal at the end of the first half of Denver's loss to the Chargers.

— Justin Tucker, Ravens, was 4 for 4 on field goals, including two 46-yarders, and made his only extra-point attempt in Baltimore's 20-19 loss to the Los Angeles Rams.

— Joey Slye, Washington, was 3 for 3 on field goals, including a 55-yarder to end the first half, and made his only extra-point attempt in a 20-16 loss to Philadelphia.

— Jonathan Ward, Cardinals, made an improbable catch of upback Chris Banjo's throw on a fake punt, extending a drive that ended with a touchdown in Arizona's 25-22 win over Dallas.

— Von Miller, Rams, had two sacks — including one in the final minute that essentially ended Baltimore's hopes — and three quarterback hits in Los Angeles' 20-19 win over the Ravens.

— Chuck Clark, Ravens, had two interceptions, returning one 17 yards for Baltimore's only touchdown in its loss to Los Angeles.

— Trevis Gipson, Bears, had a strip-sack among his career-best two sacks in Chicago's 29-3 win over the New York Giants.

Cincinnati's Ja'Marr Chase had 266 receiving yards in the Bengals' win over the Chiefs, breaking Jerry Butler's NFL record for receiving yardage in a game by a rookie. Butler had 255 yards for Buffalo against the New York Jets on Sept. 23, 1979. Chase also broke Justin Jefferson's rookie record for receiving yards in a season. He has 1,429 yards with one game left; Jefferson had 1,400 in 2020. ... New England's Bill Belichick reached 10 wins for the 20th time as a head coach, tying Don Shula for the most in NFL history. ... The Chicago Bears joined Green Bay as the only franchises with 800 victories counting the postseason. ... Chicago's Robert Quinn broke Hall of Famer Richard Dent’s franchise single-season mark with his 18th sack. He now has 100 1/2 sacks and needs one to match his career high of 19 with St. Louis in 2013. ... Tampa Bay’s Tom Brady reached 40 touchdown passes for the second consecutive season, joining Drew Brees as the only players to do that. ... There have been 32 games this season decided by a score on the final play, the most in history. ... Buffalo quarterback Josh Allen had two rushing touchdowns, giving him 31 for his career. He has 101 touchdown passes and is the first player in NFL history with at least 100 TD passes and 30 rushing TDs in his first four seasons. ... Green Bay coach Matt LaFleur improved to 39-9 in his career, surpassing George Siefert for the most wins by an NFL coach in his first three seasons.

Cincinnati won the AFC North after finishing last in the division last season, the 17th time in the past 19 seasons in which one team finished first after coming in last the prior year. ... Atlanta’s Kyle Pitts set the franchise rookie record for yards receiving and became the NFL’s second rookie tight end to top 1,000 yards. Pitts finished with two catches for 69 yards in the Falcons' loss at Buffalo. With 1,018 yards receiving, he broke the team’s rookie record set by Julio Jones, who had 959 yards in 2011. Pitts also inched within 58 yards of the NFL record set in 1961 by Mike Ditka for rookie tight ends. ... The Jacksonville Jaguars (2-14) have lost eight consecutive games, including three straight since firing coach Urban Meyer. Their loss at New England was their 17th straight road defeat, the longest streak in the league. ... Miami's Jaylen Waddle had three receptions to reach 99 this season, three short of Anquan Boldin's rookie record of 101 in 2003. ... Mac Jones, the final quarterback taken in the opening round of April’s draft, now has victories over the top two QBs selected: top overall pick Trevor Lawrence and No. 2 selection Zach Wilson. ... The New York Giants lost their fifth straight game and set a season low in yards for the second straight week, finishing with 151 against Chicago after being held to 192 against Philadelphia. ... Baltimore tight end Mark Andrews set a franchise single-season record for receiving yards. He has 1,276 yards, eclipsing Michael Jackson's 1,201 in 1996. Andrews has 99 catches, four shy of Derrick Mason's franchise record of 103 in 2007. ... The Rams' Cooper Kupp has 138 receptions this season, the third most in NFL history, and 1,829 yards, fifth best of all time. ... The Patriots’ J.C. Jackson has 25 interceptions in his first four seasons, the second most behind Lem Barney (32) and tied with Everson Walls and Lester Hayes. ... Green Bay finished the season 8-0 at Lambeau Field, the only team with an unbeaten record at home.

GOODBYE TO ALL THAT

Antonio Brown shed his pads, jersey, gloves and T-shirt, exiting the field at MetLife Stadium in the third quarter of the Tampa Bay Buccaneers' game against the New York Jets — and possibly bidding adieu to his NFL career.

Bucs coach Bruce Arians said after the game that Brown was kicked off the team and refused to discuss it further.

The mercurial wide receiver appeared to be frustrated with his limited role in the offense as Tampa Bay trailed the New York Jets 24-10 at the time. He had three catches for 26 yards. Tom Brady rallied the Bucs, throwing a touchdown pass shortly after Brown departed, and eventually hitting Cyril Grayson for a 33-yard score with 15 seconds remaining to give Tampa Bay a 28-24 win.

“It’s a difficult situation,” Brady said. “Everybody should do what they can to help him in ways that he really needs it. We all love him. We care about him deeply. We want to see him be at his best. Unfortunately, it won’t be with our team.”

The Miami Dolphins became the first NFL team to win seven straight games after losing seven in a row in the same season. Their streak ended Sunday with a 34-3 loss at Tennessee, and hours later, they were eliminated from playoff contention when the Los Angeles Chargers beat Denver. The Dolphins came into their game against the Titans knowing they likely needed two more wins.

With their margin for error almost gone, every mistake is magnified for the Baltimore Ravens.

The Ravens were called for a crucial delay-of-game penalty on third-and-goal from the 4, and after settling for a field goal on that drive, Baltimore allowed the Los Angeles Rams to drive the other way for the winning touchdown with less than a minute remaining. The Ravens lost 20-19 on Sunday in a devastating blow to their postseason hopes.

“We had to play our best football, but we played a little bit under that,” said quarterback Tyler Huntley, who started because Lamar Jackson missed a third straight game with an ankle injury.

The injury-depleted Ravens once led the AFC but have lost five straight games, four of them by two points or fewer. They need a win next week and a whole lot of help to make the playoffs.

Washington tight end Ricky Seals-Jones injured his neck in a nasty collision with a camera operator on the sideline against Philadelphia. Seals-Jones had his neck stabilized before he was lifted onto a stretcher and carted off. ... Seattle Seahawks linebacker Bobby Wagner suffered a knee injury when he slipped and fell awkwardly trying to defend a screen pass on the Detroit Lions' first offensive play. He did not return. ... Dallas receiver Michael Gallup had to be helped off the field after injuring his left knee while scoring the first touchdown for the Cowboys against Arizona. ... New York Jets running back Michael Carter suffered a concussion in his team's loss to Tampa Bay and didn't return. Also departing with injuries were Jets left tackle George Fant (left knee) and tight end Dan Brown (hip) and Bucs running back Ronald Jones (ankle) and defensive back Rashard Robinson (groin). ... In the Titans' win over the Dolphins, Tennessee tight end MyCole Pruitt hurt his right ankle on a running play in the second quarter. His leg was put in an air cast, and he was carted off the field to the locker room. Miami linebacker Elandon Roberts hurt his groin early in the third quarter. ... Chargers center Corey Linsley (back) and Broncos left guard Dalton Risner (elbow) were hurt in Los Angeles' win over Denver. ... Houston safety Jonathan Owens (wrist), defensive lineman Jonathan Greenard (shoulder) and defensive back Grayland Arnold (ankle) were hurt in a loss at San Francisco. ... Kansas City right tackle Lucas Niang suffered a knee injury against Cincinnati. ... Bengals left guard Quinton Spain hurt his right ankle. ... Saints safety P.J. Williams (left ankle) was hurt against Carolina. ... Colts defensive back Xavier Rhodes injured a hamstring against the Raiders.

“Definitely one of the weirdest weeks of my NFL career if not the weirdest. ... But we’re good, locked in the virtual meetings. Just different, wouldn’t say that’s the reason for the performance or the reason we lost today by any means. Just a strange, strange week.” — Indianapolis Colts quarterback Carson Wentz, who was forced to sit out five days for a positive COVID-19 test and was activated Sunday in time to play against Las Vegas.