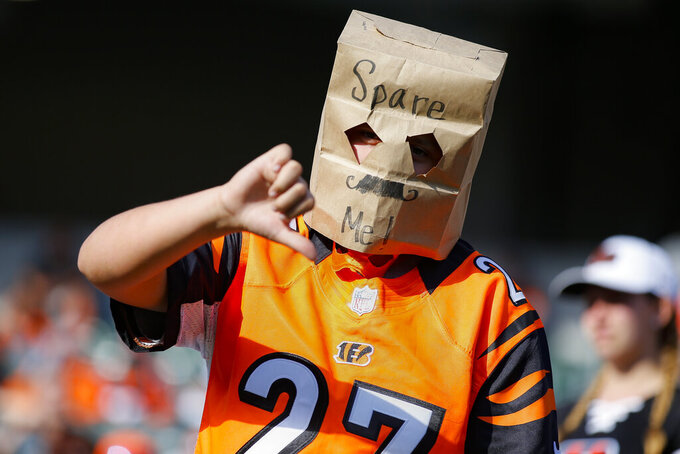 A Cincinnati Bengals fan reacts in the second half of an NFL football game against the Jacksonville Jaguars, Sunday, Oct. 20, 2019, in Cincinnati. (AP Photo/Gary Landers)

CINCINNATI (AP) — Thirty-three yards rushing, all by the quarterback. Just when the Bengals think their offense can't get any worse, it reaches new depths.

And seven weeks into the season, they're still winless with no relief in sight.

Andy Dalton threw three interceptions in the fourth quarter, one of which was returned for a touchdown, and the Jacksonville Jaguars pulled away to a 27-17 victory Sunday that extended Cincinnati's worst start in 11 years.

First-year coach Zac Taylor is still awaiting that first win, watching the dwindling fan base get more restless by the week. Several wore bags over their heads Sunday, and a banner in the upper deck played off their "New Dey" motto for the season by declaring: "Fans Are Due Day."

They can keep waiting while Taylor tries to figure out how to make something out of the mess, especially the running game. At this point, he's open to trying anything.

"We can't have big enough egos to where it's like, 'Oh, this player's been playing this position,' or, 'We have to continue to do it this way as a coach,'" said Taylor, who calls the plays on offense. "We've got to look at everything."

Everyone knows where to start.

The Bengals (0-7) ran for 33 yards during a loss at Baltimore a week ago. They had the same total Sunday, but this time it was worse in how it happened. Dalton accounted for all 33 yards on four scrambles. Running backs Joe Mixon (10 carries, 2 yards) and Giovani Bernard (four carries, no yards) had trouble getting back to the line of scrimmage. Receiver Alex Erickson lost 2 yards on two carries.

With nothing on the ground, the Bengals have relied on Dalton to do everything. He threw 43 times Sunday, completing 22 for 276 yards and a pair of touchdowns. He also was sacked twice and hit repeatedly.

Dalton has thrown 286 times, among the most in the NFL.

"When you're one-dimensional, it makes it easy for the other side to know what's going on," Dalton said.

Knowing that Dalton had to throw figured into the Jaguars' biggest play. Yannick Ngakoue sensed the Bengals would try a screen pass when Bernard — their top receiver out of the backfield — got into the game. The defensive end was in position to grab the floating pass and return it 23 yards for the clinching touchdown.

The Bengals have been held under 35 yards rushing in four of their seven games. Mixon has only 254 yards. Dalton is their second-leading rusher with 51. The offensive line has been an issue for the last few years, and it's struggling to create room for running backs.

"There's a big hole there and at the last second, they're beating us up front 1-on-1," Taylor said.

That's only half of a bad equation.

The Bengals are not only last in the league in running the ball; they're also last in stopping the run. Leonard Fournette ran for 131 yards Sunday, and the Jaguars piled up 216 overall on the ground. It's the third straight game and the fourth time this season that an opponent has rushed for more than 200 yards.

Cincinnati has allowed 1,323 yards rushing while managing only 372.

"It's not good enough because we haven't won a single game," linebacker Preston Brown said.