Numerous mistakes prove too much for Seahawks to overcome 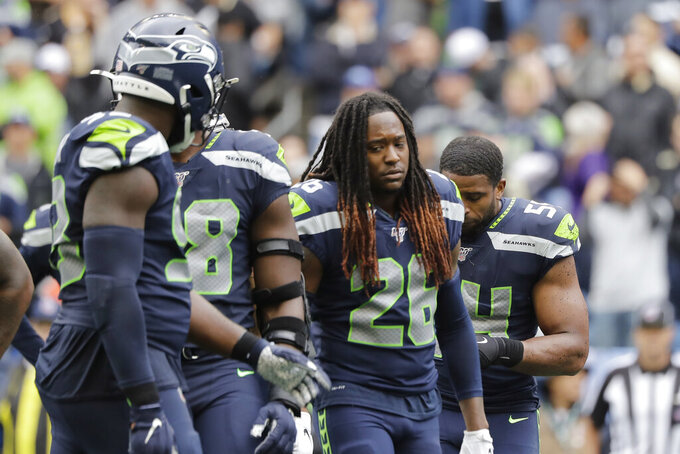 Seattle Seahawks' Shaquill Griffin (26) and teammates walk off the field late in the second half of an NFL football game against the New Orleans Saints, Sunday, Sept. 22, 2019, in Seattle. (AP Photo/Ted S. Warren)

SEATTLE (AP) — Pete Carroll's day started with getting whacked in the face by an errant football during pregame warmups to the point he needed a bandage to close the gash.

It didn't get any better from there. For Carroll or the Seattle Seahawks.

Seattle's strong start to the season crashed under a cavalcade of errors in Sunday's 33-27 loss to the New Orleans Saints. The Seahawks were 2-0 for the first time since their Super Bowl championship season of 2013, but were undone by a series of mistakes that overshadowed their huge statistical advantage.

Seattle gave gifts to the Saints all day, whether it was turnovers, untimely penalties, terrible tackling or costly clock management. It was an equation of errors that was too much to overcome.

Seattle's unbeaten start through two weeks deserved an asterisk. The Seahawks outlasted winless Cincinnati 21-20 in Week 1, despite Andy Dalton throwing for 418 yards without A.J. Green. Seattle followed last week winning 28-26 at Pittsburgh with Ben Roethlisberger playing only half the game because of an elbow injury.

So there was some good fortune in starting 2-0. And getting to 3-0 seemed likely with the Saints playing minus Drew Brees.

"You can't expect things like this to happen like it's happened in other games and everything just continues to go our way and we find a way to win," Seattle wide receiver Tyler Lockett said. "At some point it was going to have to stop being in disguise and it was going to have to reveal itself to us that we can't shoot ourselves in the foot. We can't continue to do these things thinking that we're still going to win."

Carroll said he got smacked by the wayward ball on the final play of pregame warmups and it should have been an omen. New Orleans had a 7-0 lead before Teddy Bridgewater ever had to take a snap in place of Brees, after Deonte Harris returned a punt 53 yards for a touchdown in the opening minutes. It was the first punt return for a score against the Seahawks since 2015.

It was just the beginning.

Chris Carson fumbled for the third time in three games, this time watching Vonn Bell return the turnover 33 yards for a touchdown. Alvin Kamara bounced off multiple defenders and scored on a 29-yard screen pass late in the first half. Al Woods was penalized for lining up over the center on a missed field goal attempt on the opening drive of the second half. The penalty gave New Orleans a first down and eventually became a 1-yard TD catch by Michael Thomas.

Seattle was even penalized for having a non-uniformed player come onto the field following a turnover in the second half.

"We just had critical penalties and critical mistakes in certain moments that cost us, whether it was a penalty, missed tackle," Seattle linebacker Bobby Wagner said. "It was always something at a critical moment that didn't allow us to turn it around."

The oddity was how big the day ended up being for Seattle statistically.

Russell Wilson threw an 8-yard TD to Lockett in the first half and ran for a pair of touchdowns in the fourth quarter. His 2-yard TD run early in the fourth pulled Seattle within 27-14. New Orleans went three-and-out on its next drive but Seattle couldn't convert on fourth-and-1 deep in its end and Kamara scored on a 1-yard plunge for the capper. Wilson also missed Lockett on a fourth-down throw in the end zone in the third quarter.

Wilson was 32 of 50 for 406 yards and added a 4-yard TD to Will Dissly on the final play of the game. It was the second-most yards passing in a game for Wilson. Lockett had a career-high 11 catches for 154 yards.

Seattle had 515 yards of total offense — third most in Carroll's tenure as head coach — and lost.

"You can't put yourself in the hole and expect to just find a way to be able to always come back every single time," Lockett said. "For us, I think it's a learning experience and it helps us down the road."