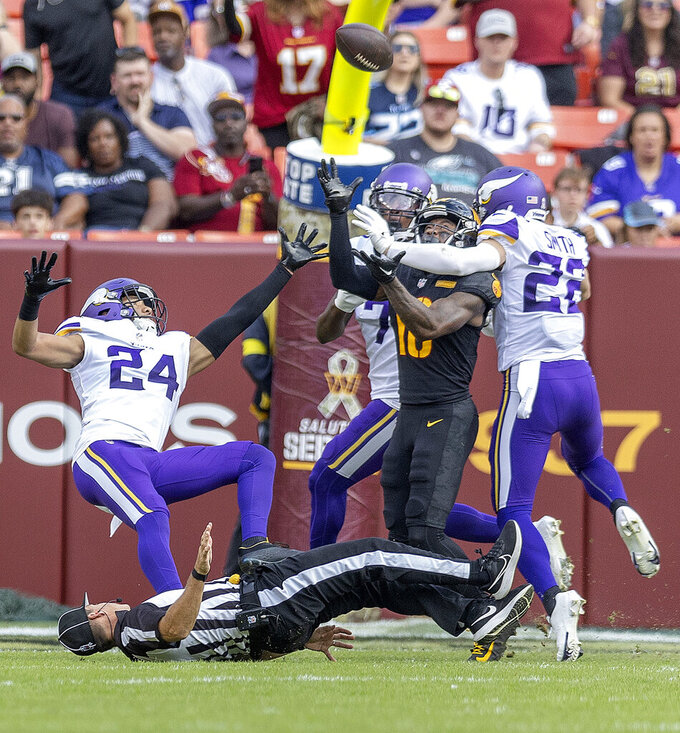 Washington Commanders wide receiver Curtis Samuel (10) comes down with a catch as Minnesota Vikings safety Camryn Bynum (24) trips over the referee in the third quarter of an NFL football game in Landover, Md., Sunday, Nov. 6, 2022. (Elizabeth Flores/Star Tribune via AP)

LANDOVER, Md. (AP) — Taylor Heinicke lofted the ball into triple coverage like it was a Hail Mary throw.

On the sideline, coach Ron Rivera thought to himself, “Are you kidding me?”

That was just the beginning of one of the most bizarre plays of the NFL season. What should have been an easy interception turned into a catch by Curtis Samuel for a 49-yard Washington Commanders touchdown Sunday when an official ran into Minnesota Vikings defender Camryn Bynum.

Talk about the nutty play buzzed in the visiting locker room afterward, and the Vikings could laugh and joke about it because they came back to win 20-17 for their sixth consecutive victory to improve to 7-1. But that didn't make it any less weird to those on either side who were a part of it.

"It was pretty wacky," safety Harrison Smith said. “I was kind of surprised the ball was coming that way. Kind of knew Cam was kind of waiting on it.”

Bynum, Smith and cornerback Patrick Peterson were all there, and that throw turns into an interception probably 99 times out of a 100.

“I saw a punt return interception coming,” Bynum said. “I almost had to fair catch it because it was in the air that long.”

Problem is, back judge Steve Patrick stumbled and effectively set a pick for Samuel.

“He ran right into you!” Peterson said to Bynum afterward. “We just had a little bump in the road — a speed bump.”

Across the bowels of FedEx Field, Heinicke joked: “Definitely need to give a game ball to that ref for knocking down that safety."

Bynum was steaming but accepted Patrick's apology for getting in the way. From the sideline, Vikings coach Kevin O'Connell wasn't too happy, either, but he understood sometimes these things happen.

“As the coach of the team it happens to, it’s very hard to react to in the moment, especially when I felt like that had a good chance to be an interception going back the other way,” O'Connell said. “And then for not only it to happen that way but then also go from an interception to a touchdown was unfortunate.”

The play was reviewed to see if Samuel was touched down at the 1-yard line or got into the end zone. There was no question about the collision between the back judge and a player.

“I want to assure you that all officials are working to not be contacted by the players,” NFL senior vice president of officiating Walt Anderson said. “There are times where they can make adjustments, and they normally do. They are all working and trying to avoid contact as best they can. It’s just one of those unfortunate things out on the football field, occasionally officials do contact players.”

Heinicke, who threw a jump ball to Terry McLaurin last week in a win at Indianapolis, had plenty of praise for Samuel making the catch through traffic — both in purple and white and in stripes.

“When you get the coverage like that, you want to give him a shot,” Heinicke said. “I know he had a pretty good shot at catching it and the ref made a pretty good play for us.”

The play from start to finish rendered Peterson, a 12-year veteran, “speechless.”

“We’ve never seen that happen before,” Peterson said. "Hat off to the receiver keeping his focus on the ball to get a touchdown. Unfortunately they did not win the game. Fortunately, we won the game."

The Vikings won thanks in part to Harrison intercepting Heinicke midway through the fourth quarter, setting up Kirk Cousin's 12-yard touchdown pass to Dalvin Cook that tied the score. That was one of Minnesota's highlights, but O'Connell is glad the strangest play of the game didn't come back to bite his team after all.

“A couple times a year in this league, stuff like that happens,” he said. "I’m just proud of our team for overcoming it.”