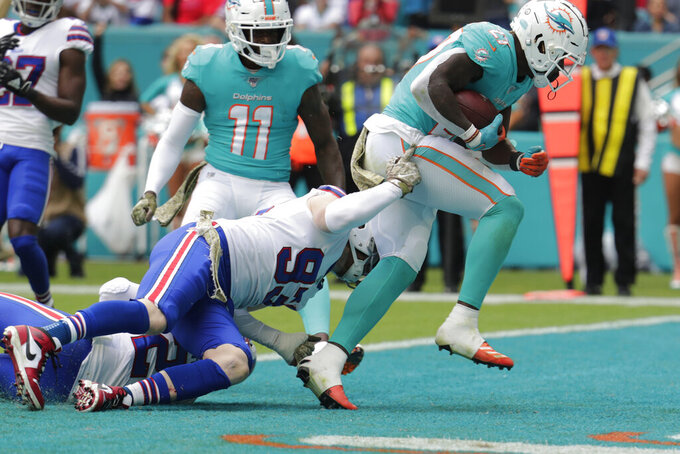 DAVIE, Fla. (AP) — The Miami Dolphins’ latest loss offers a reminder they’re not going to make much progress until they can block.

Miami’s revolving door of an offensive line was manhandled by the Buffalo Bills in a 37-20 loss. The dismal performance left the Dolphins last in the NFL in rushing, and tied for last in sacks allowed.

The Dolphins delivered a dud after a two-game winning streak hinted a foundation for their rebuild might be in place. It was their most lopsided defeat since September, and the problems started up front on offense.

“Definitely a setback,” rookie coach Brian Flores said Monday. “There were some instances where it was just bad technique, bad fundamentals. We got beat one on one in some situations.

“We just have to play better in the offensive line. And I don’t want to put it all on the O-line. It’s everybody. It starts with me.”

Special teams kept the score from being worse.

Jakeem Grant had a 101-yard kickoff return for his fourth career special teams touchdown return, a team record. He left kicker Stephen Hauschka flailing as the last line of defense.

“Once I broke through the second level, and it was just me and the kicker, I was like, ‘No way is he going to tackle me, because if he tackles me my teammates will never let me live that down, and then I have to pay a fine,’” Grant said.

Grant also had a 49-yard return. Jason Sanders recovered his own onside kick, but Miami squandered that scoring chance by losing a fumble on the next play.

Some things never change: Persistently bad blocking is a big reason the Dolphins haven’t won a playoff game since 2000.

On Sunday, they gave up more yards in sacks (43) than they gained rushing (23). Miami is allowing 4.2 sacks per game while averaging 3.0 yards per rush, and no team is worse in either category.

Part of the problem is the Dolphins have started seven personnel combinations from tackle to tackle this year.

“Continuity is a big thing,” quarterback Ryan Fitzpatrick said. “Those five really have to work together, especially the guys that are standing next to each other, whether it’s the guards and the tackles or guards and center.”

DeVante Parker had a career-high 135 yards receiving on seven catches. Some came in garbage time, but the fifth-year pro is on pace for career highs in catches, yards and touchdowns.

“He has been the most consistent guy that we have on our offense, and has been all year long,” Fitzpatrick said. “He’s a guy that I know I can count on every Sunday.”

Cornerback Nik Needham was coming off the best game of his rookie season but had a rough day against John Brown, who caught two touchdown passes.

“You’ve got to grow up quick, because you don’t want to just be out there messing up all the time and then people are saying, ‘Oh, that’s a rookie,’” Needham said. “To me personally, that doesn’t feel good.”

70-3: The Dolphins have been outscored by that margin in the third quarter this season. It was 7-0 Sunday.

The Dolphins need to dig out the cold-weather gear. They play Sunday at Cleveland (4-6), which has won two games in a row, and have December dates at the Jets, Giants and Patriots.