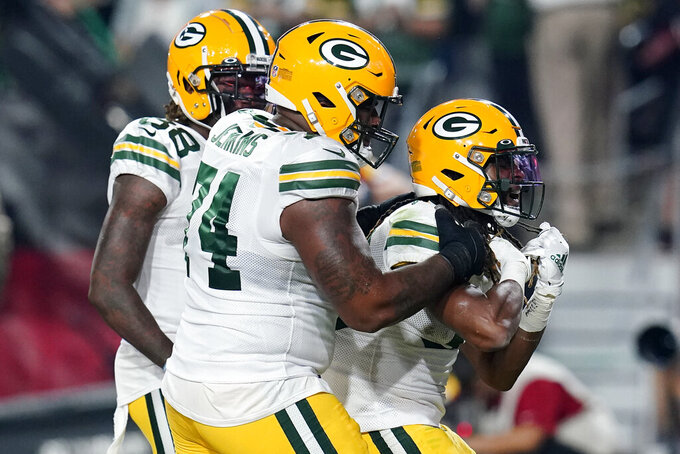 GLENDALE, Ariz. (AP) — Rasul Douglas was living the life of an NFL journeyman just a few weeks ago, bouncing between camps and practice squads in a frustrating process that is football's version of purgatory.

Finally, the Green Bay Packers liked what they saw.

Now he's a Thursday night hero for the league's hottest team — at one of his former team's expense.

Douglas corralled an interception with 12 seconds left in the fourth quarter that helped the Packers knock off the previously unbeaten Arizona Cardinals 24-21 in a thriller that featured two of the NFL's top quarterbacks.

“Blessed,” Douglas said. “You're in a crazy mental state being in the league for five years, never been on the practice squad before. You feel like you are working for nothing kind of. Then you get a call and you are somewhere else and you’re playing.”

The Cardinals looked like they were going to rally to win their eighth straight game but Kyler Murray threw the stunning interception on second-and-goal as the home crowd groaned in disbelief. A.J. Green didn't expect the pass to come his way, never turned around and Douglas was there to snatch the ball in the corner of the end zone.

It was a big night for some lesser-known Packers players. Douglas was added to the active roster just three weeks ago when the team needed help in the secondary. He was signed off the Cardinals practice squad, where he spent a few weeks earlier this year.

“This is why I love this squad,” Packers quarterback Aaron Rodgers said. “The guy that made the pick was with them (pointing to Cards sideline) for four weeks. He was on the street. We brought him in. He’s starting for us. He’s a great dude. He’s really meshed well with our team. To come up with a play like that with 15 seconds left is incredible.”

Randall Cobb's clutch night was much needed since Green Bay was playing without their two top receivers. Davante Adams and Allen Lazard were put on the reserve/COVID-19 list earlier in the week, but the 31-year-old Cobb responded with two touchdowns that were both tough catches in traffic.

“It was tough in the passing game at times, but Cobby came up with a couple of big touchdown catches," Rodgers said.

Cobb's 6-yard touchdown catch on the first play of the fourth quarter put the Packers up 24-14. He was once one of the NFL's top receivers — making the Pro Bowl in 2014 with 1,287 yards receiving and 14 touchdowns — but has settled into more a secondary role late in his career.

He only caught three passes on Thursday, but they were important ones.

The Cardinals trailed for most of the night but rallied to pull within 24-21 on James Conner’s second touchdown run of the game with 10:45 left in the fourth. Arizona then had a crucial goal-line stand late in the fourth — capped by Devon Kennard swatting down Rodgers’ fourth-down pass — giving them the ball back at the 1-yard line and an opportunity to go 99 yards for the win.

They almost made it.

Green Bay (7-1) has won seven straight games after dropping the season opener. Arizona (7-1) was trying to set a franchise record for longest winning streak to start a season but instead tied the mark set in 1974.

Both teams were hampered in the early going by a lack of healthy receivers. The offensive pace picked up in the second half.

Green Bay's offense was a little more conservative without Adams and Lazard. Arizona's top receiver DeAndre Hopkins made a 55-yard catch in the first quarter but tweaked his sore hamstring on the play and didn't play for a big chunk of the game.

Early in the third quarter, Murray threw a pass that was deflected by Moore into the hands of Green Bay's Henry Black at the Arizona 14. Five plays later, Rodgers found Cobb in the corner of the end zone for a touchdown and 17-7 lead.

The Cardinals responded, but fell just short of the win. Murray finished with 274 yards passing and two interceptions.

“We didn’t play very well in the first half, I didn’t call a very good game, couldn’t get into a rhythm, took some negative plays,” Cardinals coach Kliff Kingsbury said. "In the second half, guys responded and they’ve done that all year when we’ve struggled, to be able to come back and answer the bell.

“We just weren’t able to finish this time.”

The Cardinals were playing their first game without defensive end J.J. Watt, who reportedly needs shoulder surgery that could end his season.

Watt suffered the injury in last week's game against the Texans, though there was no indication that there was a problem after the game. The three-time NFL Defensive Player of the Year has 16 tackles and one sack this season.

Cardinals: LB Zaven Collins injured his shoulder in the first quarter and didn't return ... S James Wiggins hurt his knee in the first half and didn't return. ... Hopkins has been bother by his hamstring issue for a few weeks and hasn't practiced much. ... RB Jonathan Ward was carted off the field in the third quarter after making a special teams tackle. He had a concussion/neck injury but the Cardinals said he had movement in his extremities.

The Packers travel to face the Chiefs on Nov. 7.

The Cardinals travel to face the 49ers on Nov. 7.