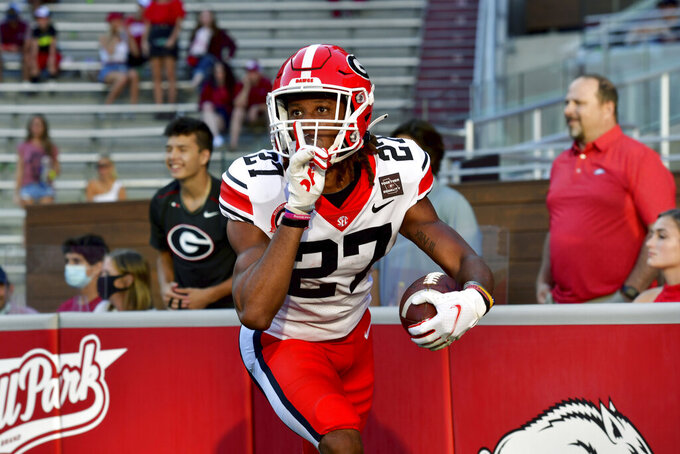 FILE - In this Saturday, Sept. 26, 2020 file photo, Georgia defensive back Eric Stokes (27) returns an interception for a touchdown against Arkansas during an NCAA college football game in Fayetteville, Ark. Daniel Jeremiah noted that Georgia teammates Tyson Campbell and Eric Stokes plus Florida State’s Asante Samuel Jr. as cornerbacks who could still be available early in the second round. The Packers could use some cornerback help and also would like to boost their depth on both sides of the line of scrimmage. (AP Photo/Michael Woods, File)

Green Bay Packers general manager Brian Gutekunst has made at least one trade on the opening night of the draft each of the past three years.

“I would bet they’ll be on the move again,” Jeremiah said.

Gutekunst made one of the most surprising moves of last year’s draft by trading away a fourth-round pick to move up four spots in the first round and add Utah State quarterback Jordan Love to a roster that already included Aaron Rodgers, who would go on to throw a NFL-leading 48 touchdown passes and earn his third MVP award during the 2020 season.

Jeremiah wonders if the Packers might trade out of the first round this time. The Packers have the 29th overall pick in the draft as they look to take the next step after losing in the NFC championship game each of the past two seasons.

“When you look at where they are and what they need, and you look at kind of those early second-round corners that could be there, you look at some offensive line depth,” Jeremiah said. “To me that kind of screams getting out of (round) one and getting some extra picks. They’re a prime candidate to me to slide back a little bit.”

Jeremiah mentioned Georgia teammates Tyson Campbell and Eric Stokes plus Florida State’s Asante Samuel Jr. as cornerbacks who could still be available early in the second round. The Packers also would like to boost their depth on both sides of the line of scrimmage.

Green Bay’s salary cap situation prevented the Packers from doing much on the free-agent market, so their best chances at upgrading their roster will come in the draft.

The Packers’ biggest offseason change so far has been the decision to have Joe Barry take over for Mike Pettine as defensive coordinator. Gutekunst said last month that switch doesn’t necessarily mean the Packers need different types of players on that side of the ball to fit what Barry likes to do.

“I think there might be some subtle things, but at the same time I think we’ve always kind of strived to find versatile football players that can really thrive in any scheme,” Gutekunst said.

The Packers haven’t drafted any wideouts the past two years, which makes it seem likely they’ll finally take at least one this time. Green Bay hasn’t selected a wide receiver in the first round since selecting Javon Walker from Florida State at No. 20 overall in 2002.

The second round historically is when the Packers have found quality wideouts. Greg Jennings (2006), Jordy Nelson (2008), Randall Cobb (2011) and Davante Adams (2014) were all second-round picks.

Green Bay’s offensive line depth was one of its greatest strengths last season up until the NFC championship game, when the Packers allowed five sacks in a 31-26 loss to the Tampa Bay Buccaneers while All-Pro left tackle David Bakhtiari was out with a torn anterior cruciate ligament.

But after releasing tackle Rick Wagner and losing All-Pro center Corey Linsley to the Los Angeles Chargers via free agency, the Packers may need to draft some linemen to restore that depth. The Packers also lost guard Lane Taylor, who suffered a season-ending knee injury in the 2020 opener and signed with the Houston Texans this month.

The Packers have one of the game’s top cornerbacks in Pro Bowl selection and 2018 first-round pick Jaire Alexander, but he could use some help. Green Bay addressed that concern by re-signing Kevin King, but still may want to address that position some more.

Green Bay’s issues at cornerback were apparent when they gave up three touchdown passes to Tom Brady in the first 32 minutes of the NFC championship game.

The Packers have a couple of promising young inside linebackers in 2020 fifth-round pick Kamal Martin and undrafted free agent Krys Barnes, but both dealt with injuries in their rookie seasons last year.

Perhaps those injury issues might cause the Packers to add an inside linebacker in the draft, though it’s a position they generally haven’t prioritized with early picks.

The Packers have two picks in the fourth, fifth and sixth rounds and one pick in every other round. Those extra late-round picks could give Gutekunst an opportunity to move up and down the board on the third day of the draft.