Packers keeping 1st-round pick Stokes busy on and off field 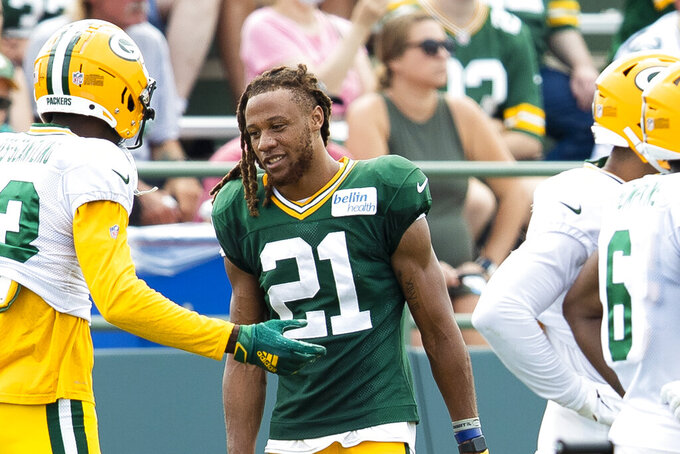 Off the field, he must buy snacks for Green Bay’s veteran defensive backs. On the field, Stokes frequently has to defend passes from MVP quarterback Aaron Rodgers to All-Pro receiver Davante Adams.

Stokes is attacking all these assignments with the enthusiasm that helped make him a first-round selection. The Packers selected him out of Georgia with the 29th overall pick in the draft.

“I’m pretty much living my dream,” Stokes said. “This is all I wanted, to be here. I always wanted to be in the NFL, so I can’t take a day for granted. Pretty much, when I wake up, I’m always smiling.”

He’s maintaining that approach even while understandably taking plenty of lumps during his on-the-job training against Adams this summer.

Trying to cover Adams when Rodgers is throwing him the ball is an assignment difficult for most veterans, let alone a rookie. Stokes isn’t shying away.

“You can’t be scared to mess up,” Stokes said.

The Packers are hoping the opportunities to defend one of the best receivers in the game will make Stokes battle-tested once the regular season starts.

Green Bay has one of the league’s top cornerbacks in Jaire Alexander, but the Packers’ NFC championship game loss to the Tampa Bay Buccaneers underscored their need for more cornerback depth. The Packers re-signed cornerback Kevin King, but injuries have limited him to 41 games during his four-year career.

The Packers believe Stokes is an intriguing prospect.

‘He knows that when you’re going against the best, it’s only going to make you better,” Packers coach Matt LaFleur said. “I think he’s got the right mindset for that.”

Stokes’ speed also makes him an attractive prospect. LaFleur cited a play in which Stokes ran step for step with receiver Marquez Valdes-Scantling, who led the NFL in yards per catch last season.

That play exemplified Stokes’ potential and explains why teammates keep encouraging him as he works against Adams.

“There’s not many 12s and 17s out there,” safety Darnell Savage said as he referenced Rodgers’ and Adams’ jersey numbers. “That’s pretty much all you can say.”

Stokes’ teammates haven’t been as helpful when it comes to snack purchases.

Alexander has been particularly persistent in reminding Stokes he needs snacks for all the other defensive backs. Stokes recounted a recent shopping trip in which he bought pistachios for safety Adrian Amos and junk food for everyone else, going down a list that included jumbo bags of various chocolate bars, variety bags of chips and various Chips Ahoy and Skittles packages.

His purchase drew quite a reaction from the clerk at the checkout line.

Stokes was more excited about an even bigger purchase he finalized after the Packers’ organized team activities. Stokes lived up to a promise he said that he made at the age of 14 by buying a house for his grandmother. Stokes surprised her by getting a house she thought was off the market.

He posted a video on Instagram that showed her stunned reaction.

“She thought somebody else already had the house,” Stokes said. “I still had her looking at different houses, not knowing that I had got her house. I had it for like a month and finally when I was able to come back after OTAs, I was able to give it to her. It was just a feeling I can never forget.”

Stokes wants to deliver more unforgettable moments for the Packers over the next several seasons.

NOTES: The Packers claimed linebacker Chauncey Rivers off waivers from the Baltimore Ravens. Rivers spent the entire 2020 season on the Ravens' practice squad. ... LaFleur said an officiating crew will assist the Packers in their Family Night practice Saturday at Lambeau Field.