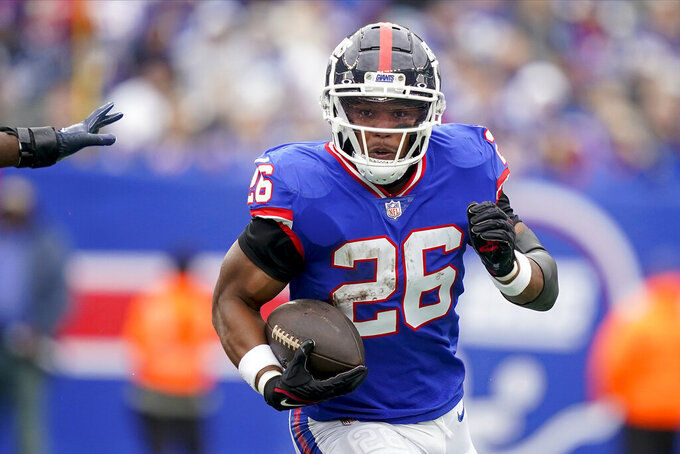 OPENING LINE: Packers by 8½, according to FanDuel SportsBook.

TURNOVER DIFFERENTIAL: Giants plus-1; Packers minus-3

GIANTS PLAYER TO WATCH: RB Saquon Barkley has an NFL-high 463 yards rushing and is coming off a 146-yard performance against the Bears. He’s gaining 5.5 yards per carry, way up from his average of 3.7 yards per rush last season. He’s just 130 yards away from matching his 2021 season rushing total.

PACKERS PLAYER TO WATCH: OLB Rashan Gary has five sacks and has had at least one in each of the Packers’ four games. He’s the first Packer to have a sack in each of the first four weeks of a season since Cullen Jenkins in 2010.

KEY MATCHUP: Barkley vs. Packers run defense: The Packers allowed New England to rush for 167 yards and average 5.1 yards per carry. Chicago’s David Montgomery rushed for 122 yards on just 15 carries at Green Bay earlier this season. Barkley’s a much more dangerous runner than Montgomery or anyone on the Patriots roster.

STATS AND STUFF: The Giants are undefeated in two previous games in England, including a 17-10 win over the Rams on Oct. 23, 2016, at Twickenham Stadium. ... Giants QB Daniel Jones ran for two touchdowns last weekend and his 193 yards rushing are the NFL’s third most at his position. ... Barkley leads the NFL with 570 yards from scrimmage and he is only player with three games of 125-plus all-purpose yards. ... Giants WR Richie James leads New York with 15 catches for 155 yards. In his previous game against Green Bay on Nov. 5, 2020, while with San Francisco, he set career highs with nine catches for 184 yards and a TD. ... The previous time the Giants had four wins in their first five games was 2009, when they opened 5-0 and finished 8-8. ... Packers QB Aaron Rodgers has 500 career touchdown passes including regular-season and playoff games, becoming just the fifth player to reach that plateau. The others are Tom Brady (716), Drew Brees (608), Peyton Manning (579) and Favre (552). ... If Gary has a sack in a fifth straight game, he would match the longest streak in Packers history. Tim Harris had a sack in five straight games in 1989) and Kabeer Gbaja-Biamila matched that achievement in 2000-01. ... Packers P Pat O’Donnell has landed 11 of his punts inside the opponent's 20-yard line, matching Houston’s Cameron Johnston for the most of anyone in the NFL. ... Packers WR Romeo Doubs is the first Green Bay rookie to catch a TD pass in consecutive games since TE Richard Rodgers did it in 2014. Doubs has 19 catches, the most by any Packers rookie through the first four games of a season. ... Packers RB Aaron Jones is gaining 6.8 yards per carry. That’s the best average through the first four games of a season by any Packer with a minimum of 40 carries through that stretch. Jones is the first Packer to have two 100-yard rushing performances within the first four games of a season since Ahman Green in 2004. ... The Packers are playing their first international game.

FANTASY TIP: Fantasy team owners wise enough to draft Doubs might want to think about starting the fourth-round pick from Utah State just about every week. Not only has Doubs caught a touchdown pass in back-to-back games, he has been targeted eight times in each of those games.