Panthers feel QB Sam Darnold will 'benefit from a reset' 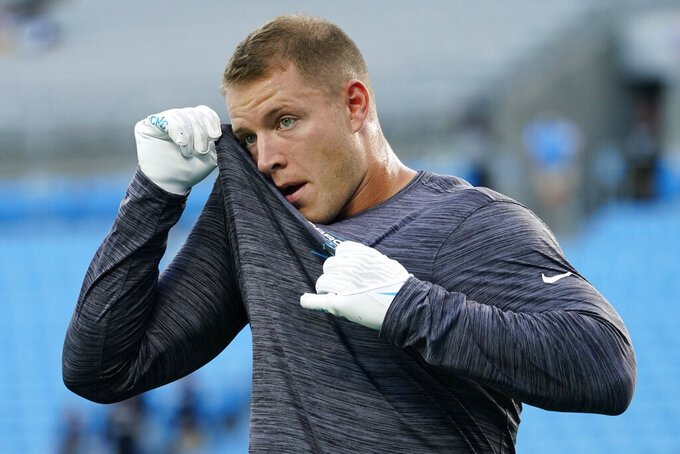 The Carolina Panthers coach eventually emerged from his office at Bank of America Stadium and walked down the hall to see general manager Scott Fitterer and asked, “You think Sam would ever be available?”

A few phone calls later, and Rhule had his guy.

The Panthers traded second-, fourth- and sixth-round picks to the Jets for Darnold, who fizzled out in New York after going 13-25 in three seasons as a starter. Yes, he’s a bit of a reclamation project, but the Panthers feel he can thrive in the right environment with the right coaches and playmakers around him — and help solve their quarterback woes following a 5-11 season.

“I think Sam can really benefit from a reset,” Fitterer said.

There’s no doubt Darnold has more weapons with which to work in Carolina.

Running back Christian McCaffrey is back after missing 13 games with injuries last season, wide receivers D.J. Moore and Robby Anderson are coming off 1,000-yard campaigns, and rookie wide receiver Terrace Marshall Jr. and free agent tight end Dan Arnold have also been added to the mix.

Darnold has been up and down during training camp, but looked good in his most extensive preseason action last week throwing for 162 yards and two touchdowns against the Pittsburgh Steelers' second-team defense.

“We like his athleticism, his size and especially the arm strength — the ability to throw the deep ball. We like that," Fitterer said. "And everything, like the person that he is, the toughness and the work ethic — all of those things really stood out to us.”

Darnold's first hurdle will be facing the Jets, Carolina's opponent in the regular season opener.

“The biggest thing for him is having poise, and he has that," McCaffrey said.

McCaffrey became only the third player in NFL history to amass 1,000 yards rushing and receiving in a single season en route to earning All-Pro honors in 2019. He played well last year, too, but injuries limited him to 259 total yards and five TDs in three games.

Now McCaffrey is back and eager to get going after sitting out the preseason as a precautionary measure.

“It teaches you a lot and you learn about yourself when you are forced to go through adversity — you either fold or keep going,” McCaffrey said. “It was tough at first and I have such a big appreciation for this game. I will never take that for granted.”

Keep an eye on Marshall, the team's second-round draft pick out of LSU, who could wind up being a huge beneficiary of playing alongside starting receivers Moore and Anderson where he should receive plenty of single coverage.

The rookie led all NFL wide receivers in the preseason with 181 yards on nine receptions while showing big-play potential.

It's no surprise Marshall has emerged on the scene so quickly given his familiarity with Panthers offensive coordinator Joe Brady, whom he worked under at LSU. Marshall had 23 touchdowns in his final two seasons with the Tigers and Brady knows how to use his skillset.

BURNING UP THE DEFENSE

Defensive end Brian Burns appears on the verge of a breakout season after posting 16 1/2 sacks over his first two seasons. With the Panthers adding edge rusher Haason Reddick (12 sacks last year for Arizona) on the other side and the expected development of last year's rookie first-round draft pick Derrick Brown on the inside, Burns should see fewer double teams than he did in his previous two seasons.

The Panthers signed Taylor Moton to a $72 million deal to shore up the right tackle spot, but the offensive line still looks like the biggest area of concern. Carolina repeatedly allowed blitzing linebackers and rushers to run free and pressure the quarterback. Given that Darnold has been sacked 98 times in his first three seasons, that is the last thing the Panthers need to thwart their QB's confidence.

The Panthers are going with untested kicker Ryan Santoso after his strong debut in last week's preseason finale. About 24 hours after being acquired via trade with the New York Giants, Santoso made two field goals, including one from 52 yards, and three extra points to beat out the slump-stricken Joey Slye for the job. Still, there is uncertainty with Santoso given that he's never actually kicked in a regular season game. And his 52-yarder was a little shaky, too, hitting off the right upright before bouncing through.