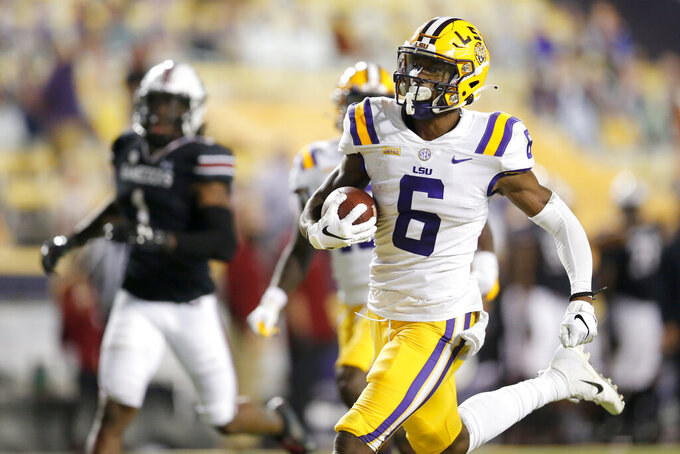 FILE - In this Saturday, Oct. 24, 2020 file photo, LSU wide receiver Terrace Marshall Jr. (6) runs the ball for a touchdown against South Carolina during the first half of an NCAA college football game in Baton Rouge, La. Baltimore ranked last in the NFL averaging 171.2 yards passing per game and had the fewest pass attempts with 406 last season. That’s partly because the running game was so proficient behind quarterback Lamar Jackson, the catalyst for the league’s No. 1 rushing attack (191.9 yards per game) for the second straight season.(AP Photo/Brett Duke, File)

CHARLOTTE, N.C. (AP) — The Carolina Panthers turned to their offense on Day 2 of the NFL draft.

The Panthers selected LSU wide receiver Terrace Marshall in the second round, and Brigham Young offensive tackle Brady Christensen and Notre Dame tight end Tommy Tremble in the third round on Friday night following a busy night of trades.

Panthers new general manager Scott Fitterer was involved in four trades in all, including moving back twice in the second round from No. 39 to 59 before taking Marshall.

Marshall became the first offensive player selected in the Rhule era, after the Panthers spent all seven picks on defensive guys last year and added cornerback Jaycee Horn from South Carolina in the first round of this year's draft.

“The goal was to pick good football players, guys that can help our team,” Fitterer said. “If it went or defense, we went that way. Obviously we were aware of that situation. Today there were defensive players there, but it got to a point where those offensive players matched our needs and our values.”

Marshall played under current Panthers offensive coordinator Joe Brady at LSU, where they helped the Tigers win a national championship two years ago — so there won't be much of a learning curve when it comes to the Panthers' offense.

The 6-foot-3, 205-pound Marshall was a big contributor in the Tigers national title run playing alongside Heisman Trophy winning quarterback Joe Burrow. Marshall caught 46 passes for 671 yards and 13 touchdowns as a sophomore despite missing three games with a toe injury.

Marshall started the first seven games of the 2020 season, leading the Tigers with 48 receptions for 731 yards and 10 touchdowns before opting out of the season.

“It's amazing playing for him," Marshall said of Brady. “He breaks everything down and it makes it easy for you.”

“He can play inside and outside, which is really paramount in the things that we try to do on offense,” Rhule said.

One of Carolina's most pressing needs in the draft was finding an offensive tackle.

The Panthers finally took the 6-foot-5, 302-pound Christensen after trading up three spots in the third round.

The 24-year-old Christensen has started every game over the past three seasons for the Cougars and was named first-team All-American as a junior. He protected the blindside of quarterback Zach Wilson, the No. 2 pick in this year's NFL draft. Christensen received the highest grade ever (96) given out to a left tackle last season by Pro Football Focus.

“I’m an elite pass protector and I’ll be able to pass protect at a high level," said Christensen, who is expected to compete for playing time at left tackle with free agent pickup Cam Erving and Greg Little.

Rhule said Christensen also has the versatility to play guard.

Tremble gives the Panthers a tight end who is adept at receiving as well as blocking. The 6-foot-4, 241-pound Tremble caught 19 passes for 218 yards last season for the Irish and was a regular on the field the last two seasons in two tight end sets because of his ability as a run blocker.

“The mentality I have every time I step on the field is to try to be the most violent and versatile guy on the field,” Tremble said.

The Panthers enter the final day of the draft with one pick each in the fourth and fifth round and three picks in the sixth. They also acquired a fourth-round pick in the 2022 NFL draft.