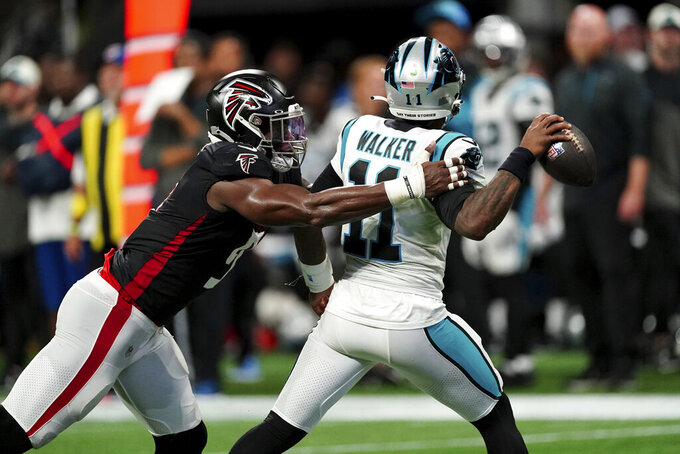 That's not a surprise considering the spark Walker has brought to the offense the last two weeks.

But Wilks could have a tricky situation on his hands in the coming weeks when both Baker Mayfield and Sam Darnold are healthy and ready to compete.

Mayfield was the backup in Carolina's 37-34 overtime loss to Atlanta, while Darnold is about to return to the 53-man roster after missing eight games on injured reserve with a high ankle sprain — all of which will create a logjam at quarterback.

Like most NFL teams, the Panthers (2-6) normally only activate two quarterbacks on game day, meaning one of those top-three picks in the 2018 NFL draft won’t be suiting up.

If Wilks chooses Mayfield over Darnold, it’s hard to foresee that being an issue given Darnold’s easygoing personality and the fact he has been out so long. But if Wilks picks Darnold over Mayfield — sending him from opening day starter to third string — it will be interesting to see how the fiery, often outspoken No. 1 overall pick reacts.

What will happen remains to be seen.

Wilks wasn't ready to broach the subject Monday on how he plans to handle the quarterback situation moving forward.

“The one thing I don’t want to do right now is get into hypotheticals," Wilks said. “So I’m going to wait and see exactly what happens at that time and my decision will be the best decision for this team.”

Wilks did praise Mayfield for being the “ultimate pro” in handling his backup role so far.

The ideal scenario for the Panthers would be to trade either Mayfield or Darnold since both become unrestricted free agents after the season and are unlikely to be re-signed.

But it's hard to imagine either garnering much interest on the trade market before Tuesday's deadline. Mayfield was one of the worst QBs in the league over the first five games of the season before injuring his ankle, while Darnold hasn't played since a very shaky 2021 campaign.

Carolina's running game. D’Onta Foreman, a free agent pickup from Tennessee, ran for 118 yards for the second straight week and added three touchdowns on the ground in his first start for the Panthers.

Wilks' commitment to the running game since taking over is certainly paying dividends. Foreman took advantage of Chuba Hubbard being out with an ankle injury and made the most of his 26 carries. His three TDs were a career best and he looked strong throughout the game, especially when getting to the second level of the defense.

Hubbard plans to return this week, but expect Foreman to start and get the majority of carries.

“I thought the offensive line, once again, did a great job and coming off the ball and creating a new line of scrimmage, and giving (Foreman) the avenues and opening up the holes where he could see it,” Wilks said.

Pass defense. The Panthers allowed Marcus Mariota to throw for 253 yards and three touchdowns against them. Yes, they intercepted him twice, but that type of performance is unacceptable against a quarterback of Mariota's caliber, especially after limiting Tom Brady to three points the week before.

DT Derrick Brown. The Panthers' 2020 first-round pick has taken his game to a new level the past three weeks and is becoming a force in the middle. He recorded a career-high 12 tackles Sunday, along with a half-sack. This is Brown's third season and he's beginning to emerge into the star player the Panthers thought he would be when they drafted him seventh overall.

K Eddy Pineiro. The Panthers have indicated they are sticking with Pineiro even though he missed a 48-yard extra-point try at the end of regulation and a 32-yard field goal in overtime — either of which would have won the game. Pineiro has not had a bad season, converting 14 of 16 field goals and 12 of 13 extra points. “Right now, we have no plans to bring in other kickers,” Wilks said.

Panthers CB Donte Jackson, who had an interception Sunday, continues to struggle with ankle issues and had to leave the game. His status for this week remains uncertain. ... S Jeremy Chinn (hamstring) is eligible to return from injured reserve this week.

317 — Number of yards passing for Walker on Sunday, a career high.

The Panthers have to find a way to regroup from the heartbreaking 37-34 overtime loss to the Falcons with two games in the next 11 days. They travel to face the Cincinnati Bengals on Sunday and then return home for a rematch with Atlanta in a Thursday night game on Nov. 10. “I told the guys, ‘We’ll see our true character and who we are as a team in how we come in there and work tomorrow,'" Wilks said.