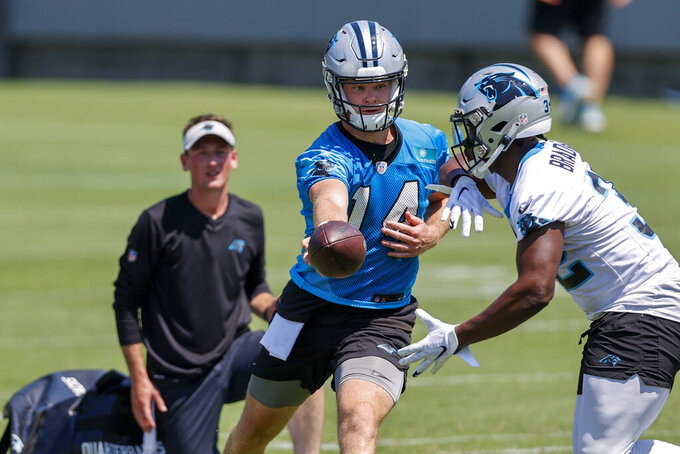 He just wants the fifth-year quarterback to avoid “catastrophic" mistakes, something that plagued him at times last season and during his first three seasons with the New York Jets.

The 25-year-old Darnold had two games last season with three turnovers and four others with two turnovers. He finished the season with 17 turnovers — 13 of those coming on interceptions — compared to 14 combined touchdowns while going 4-7 as a starter. The Panthers finished 5-12 last season.

Rhule said he wants Darnold to develop into a “confident quarterback.”

The No. 3 overall pick in the 2018 draft is learning a different system under new offensive coordinator Ben McAdoo and so far Rhule likes what he's seen from his projected starting QB.

He said Darnold was “outstanding" on Wednesday, calling it his best practice since being acquired from the Jets last season for three draft picks.

Darnold is learning quickly where to go with the football, Rhule said.

“Ben has put a lot of plays in and Sam is working at a high level to make sure he knows what to do when things go right and things break down,” Rhule said.

Rhule added: “We are seeing him get better.”

The Panthers selected Matt Corral in the third round of the draft, but view him as a prospect that needs to be developed and learn the professional game after playing in a spread offense at Mississippi.

P.J. Walker is also on the roster, but the Panthers still haven't completely ruled out bringing in a more experienced veteran quarterback at some point.

Cleveland's Baker Mayfield and San Francisco's Jimmy Garoppolo are two quarterbacks considered to be on the trade market, but it's unlikely the Panthers would make a move for either unless the Browns or 49ers agree to take on a big portion of their contracts.

Both QBs are in the final years of their contracts. Mayfield has a base salary of $18.9 million in 2022, while Garoppolo's is $24.2 million, according to Sportrac.com.

Also, Cam Newton remains an unrestricted free agent and the team has said it hasn't ruled out bringing him back.

“In terms of the amount of time needed I think most guys if they came in (by the start of) training camp, that by the end of training camp they would have things in hand and mastered,” Rhule said. “That’s five or six weeks of time to get ready. Most guys can learn our offense or defense in that time.”

Rhule said he's in coaching mode at the moment, but plans to sit down with general manager Scott Fitterer after next week's mandatory minicamp to discuss potential upgrades to the roster.

Regardless of who ends up under center, the Panthers feel as if they have increased their chances of success on offense by adding left tackle Ickey Ekwonu with the sixth overall pick and interior linemen Austin Corbett from the defending Super Bowl champion Rams and Bradley Bozeman from the Ravens in free agency. Rhule also said he likes the way young offensive linemen Brady Christensen and Michael Jordan are progressing.

Carolina allowed 52 sacks last season, fifth most in the NFL.