Patriots look to clean up issues in advance of Brady matchup 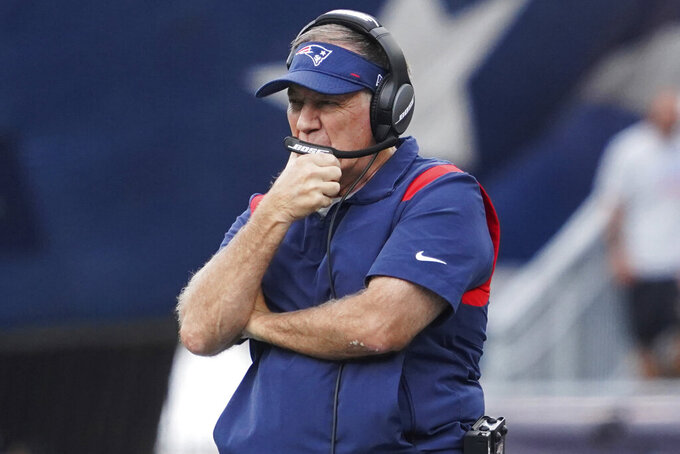 FOXBOROUGH, Mass. (AP) — It’s a new season but the New England Patriots are experiencing variations of same problems that plagued them in 2020.

The offense has better overall flow to it with Mac Jones at the helm, yet still is having trouble producing touchdowns. Opponents are scoring at a high percentage against the defense in the red zone. And the Patriots are losing the field position battle on special teams.

Key injuries are also playing a role just as they did a year ago.

Last season it was Julian’s Edelman’s ailing knee. This time it’s two key cogs who are on the mend. Cornerback Stephon Gilmore is sidelined for at least three more games as he continues to recover from quadriceps surgery. Now, running back James White is out for a yet to be determined time period after being carted off in the second quarter of Sunday’s loss to New Orleans with a hip injury.

“We can’t go back and change anything, so we just have to come in tomorrow and get back to work,” center David Andrews said. “We just want to come in and correct it, then move forward.”

Following Sunday's 28-13 loss to the Saints, the Patriots sit at 1-2. They haven't been at that mark since 2018, when they bounced back to six straight games on their way to beating the Rams in the Super Bowl.

Any hopes of duplicating that kind of turnaround begins with the weighty challenge of beating Tom Brady when he returns to town for the first time since he left in free agency to join the Tampa Bay Buccaneers.

Brady and the Bucs head into this Sunday's matchup tied for the league’s highest-scoring offense at 34.3 points per game. Their 349.7 yards per game on offense also rank second in the NFL.

Safety Devin McCourty said the key this week will be blocking any hype about the seven-time champion's return and focusing on what they need clean up this week.

“We’re not good enough to get lost ahead of us, so we better focus in on what we need to do and watch them from an X’s and O’s standpoint,” McCourty said. “Watch them as an offense, defense, special teams and lock in on that. We can’t worry about anything else.”

While the defense overall has several things to correct, the pass rush continues to show some promise. LB Matt Judon was the highlight Sunday, ending the game with 2 1/2 sacks and three hits on Saints quarterback Jameis Winston.

The offensive line took a step back this week, allowing Jones to be hit 11 times and sacked twice. While contact is expected when the quarterback attempts 51 passes, protecting the rookie better must be a priority.

Receiver Kendrick Bourne made his biggest impact of the season, catching six passes for a team-high 96 yards and a touchdown.

“It felt good, but you know it is not enough,” Bourne said. “I always want to win and am just focused on winning and just want to have another opportunity to make another play.”

Tight end Jonnu Smith had his worst game as a Patriot, catching just one pass for 6 yards on six targets. The day was punctuated in the third quarter when he bobbled a pass from Jones and tipped it in the air to safety Malcolm Jenkins, who promptly returned it 34 yard for a touchdown.

LB Ja’Whaun Bentley played only 30 of a possible 62 snaps, which Belichick confirmed Monday was due to an injury, though the coach would not specify what Bentley hurt.

25% — The Patriots’ touchdown success rate in the red zone this season. They’ve converted on 2 of 8 opportunities inside the 20-yard line, which ranks last in the NFL.

New England will be in the spotlight this week as it prepares to host Brady and the Buccaneers on Sunday night. The Patriots will be trying to avoid their first 1-3 start since 2001.