Patriots practice in front of fans at Gillette Stadium 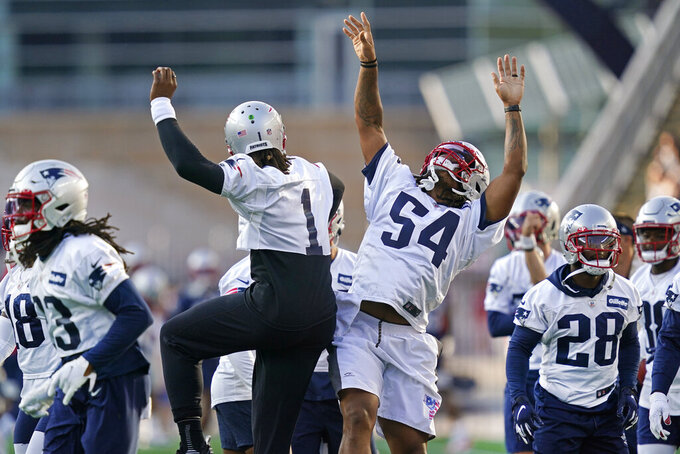 There may not have been the capacity crowd that was on hand on Jan. 4, 2020 – a 20-13 loss to Tennessee in the wild-card round of the 2019 NFL playoffs – but for the first time since that night more than 1 1/2 years ago, the New England Patriots took the field at Gillette Stadium with fans in the stands.

With thousands of season ticket members and Foxborough residents in attendance, the Patriots continued training camp by conducting a non-padded scrimmage inside their home stadium on Friday night. Coach Bill Belichick split his team up into blue and white squads for the session, which was basically conducted at a walkthrough pace.

Due to the COVID-19 pandemic, the NFL canceled all preseason games in 2020 and the Patriots played eight regular-season home games with no fans in the stands.

Taking the microphone at halftime of the scrimmage, Patriots owner Robert Kraft welcomed fans back, saying that a number of changes had been made to both the stadium and the team following its 7-9 finish last year before adding “the most important thing is after 580 days to have you all back here.”

Signed by the Patriots as an unrestricted free agent from the Los Angeles Chargers in March of 2020, the experience was new for eight-year veteran Adrian Phillips, the team’s leading tackler with a career-high 107 at safety last season.

“It was great to have the fans here today,” Phillips said. “I missed out on them my first year being here. We had the whole COVID and everything like that so they weren’t able to come, but just seeing the fans here now just in the little capacity we had it was great to see. I know when they’re getting sold out it’s going to be rockin’.”

The experience was invigorating for center David Andrews, who is entering his seventh season with the Patriots.

“I think it’s really exciting to have some people back in the stands, feel that energy,” said Andrews. “It’s not the only reason you play the game, but it’s definitely part of the reason. The energy and the crowd, it makes it all fun. Excited.”

“It feels like football again,” said five-year veteran Jonnu Smith, the tight end the Patriots signed as an unrestricted free agent from the Titans in March.

According to Phillips, the in-stadium experience offered a change of pace from the normal training camp schedule where practices are held on the practice fields behind the stadium.

“It was definitely a difference because, you know, you have your fans at the training camp practice, but they’re kind of far off,” said Phillips. “Here, it feels like they’re right on you. With this being in a semi-enclosed area all the noise goes down to the field. So it was great to hear that.”

Kicker Quinn Nordin’s leg has people talking. The rookie free agent from Michigan put on a show, capping his night off by drilling field-goal attempts from 57 and 55 yards.

Nordin appears to be making the most of his opportunity with veteran place-kicker Nick Folk sidelined.

Patriots players have Saturday off. When they return to work on Sunday, Thursday night’s preseason opener at home with the Washington Football Team will be coming into view. Preseason dates on the road against the Philadelphia Eagles (Aug. 19) and the New York Giants (Aug. 29) will follow.

“We’ll worry about the preseason games this weekend, and the Washington game, start worrying about that then,” Belichick said Thursday. “The other preseason games are going to involve some sort of joint practice. Each situation is a little bit different, but I’d say we’ll take it as it comes.

“Kind of have to look at this in pretty short windows as far as talking about second and third preseason game and all that. That’s way too far away.”