Penny shines as Seahawks continue to have slim playoff hopes 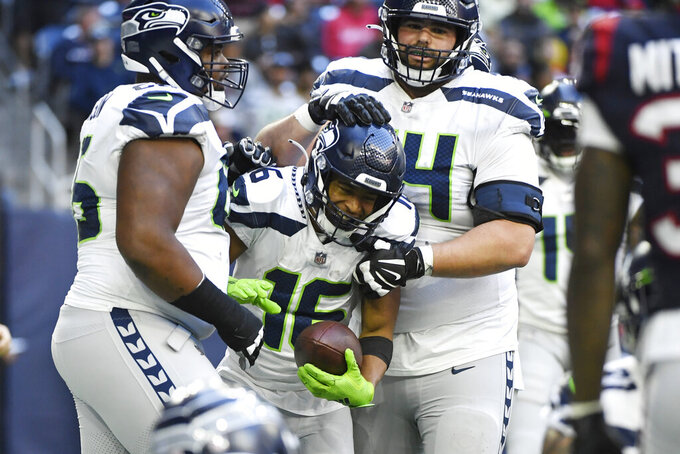 Seattle Seahawks wide receiver Tyler Lockett (16) celebrates with teammates after catching a pall for a two-point conversion against the Houston Texans during the second half of an NFL football game, Sunday, Dec. 12, 2021, in Houston. (AP Photo/Justin Rex ) 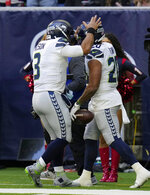 RENTON, Wash. (AP) — There was always something blocking Rashaad Penny from matching the potential that came with being a first-round pick.

Sometimes it was his teammates and the Seattle Seahawks often choosing to go with another option. More often, it was injuries — a finger, a bad hamstring, a balky calf muscle or a major knee reconstruction.

All that made what Penny accomplished Sunday against Houston that much sweeter, rushing for a career-high 137 yards and two touchdowns in a 33-13 win that kept Seattle’s slim playoff hopes alive for another week.

“These guys never gave up on me,” Penny said. “Go out to practice every day and just keep working and this is the results. I’m just thankful.”

And at least on the offensive side, it was a blueprint of what Pete Carroll has been seeking all season — a excellent run game, punctuated by big plays through the air by Russell Wilson and specifically Tyler Lockett.

It’s entirely possible this was a one-week aberration, especially when it comes to Penny’s big day and the run game as a whole. The Seahawks were facing the 32nd-ranked run defense in the league. They had to be able to run the ball against the Texans.

But it’s one of the first times this season there’s real optimism where Seattle is headed offensively.

“I don’t think we’ve played better than we played yesterday in terms of the mix and all that,” Carroll said. “Russell was 115 (passer rating) ... so I thought the way we were able to mix everybody benefited from that, and the balance of the attack and execution on third down made everybody better.”

For the second straight week, the Seahawks shut out their opponent in the second half. Shutting down San Francisco last week was far more impressive than shutting out the Texans. But it’s still a notable accomplishment for a defense that couldn’t slow anyone early in the season.

Seattle has gone eight straight games and nine of the last 10 holding opponents to 23 points or less.

This has not been the strongest season for kicker Jason Myers, who missed two extra points on Sunday. Myers has three misses on extra points this season and is just 11 of 16 on field goal attempts. Last year, Myers was 24 for 24 on field goals and made 49 of 53 extra points.

Lockett continues to feel like one of the more underappreciated wide receivers in the NFL. He became the second player in Seahawks history with three straight seasons with 1,000 yards receiving after catching five passes for 142 yards on Sunday. Lockett joined Hall of Famer Steve Largent as the only two Seattle players to accomplish that feat. Lockett now has 1,023 for the season and needs just 35 yards receiving to set a new career-high.

It was an awful scene in the final minute as Gavin Heslop was loaded onto a cart with his lower left leg in an air cast after suffering a gruesome broken leg. Heslop underwent surgery after breaking his tibia and fibula. Heslop was a practice squad addition for this week as Seattle looked to boost its depth in the secondary following last week’s shoulder injury that landed Jamal Adams on injured reserve. Heslop was on the field for just four defensive plays.

Along with the major injury suffered by Heslop, the Seahawks don’t expect to have DT Bryan Mone back anytime soon. Mone suffered a sprained knee, although Carroll said it appears to be a PCL injury and not a more serious ACL injury. ... CB D.J. Reed left in the second half with a chest contusion and Carroll said he should be fine for this week.

63 — Seattle has scored 63 points in the past two games combined. They had scored 69 in the previous five games. Seattle had not scored 30 or more in two straight games since Weeks 8 and 9 of last season.

The reality of Seattle’s playoff hopes likely comes down to Sunday’s game at the Rams. A loss would be seemingly insurmountable with three weeks remaining and such a logjam for the final couple of wild-card spots in the NFC. A win should keep Seattle at worst one-game back with home games against lowly Chicago and Detroit the following two weeks.