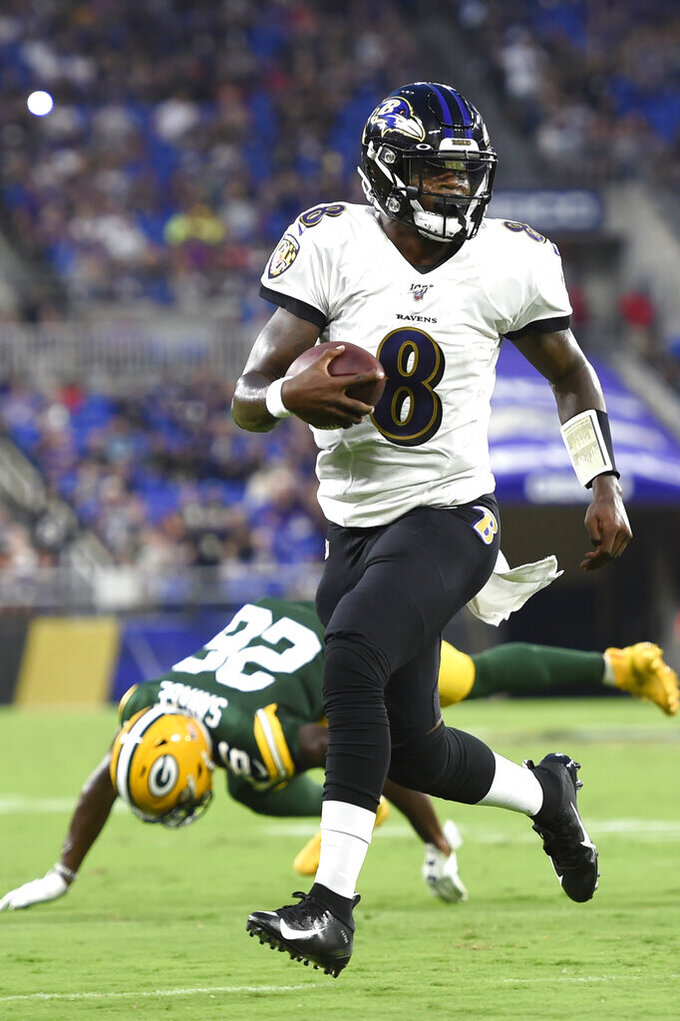 FILE - In this Thursday, Aug. 15, 2019, file photo, Baltimore Ravens quarterback Lamar Jackson (8) scrambles for yardage against the Green Bay Packers during the first half of a NFL football preseason game, in Baltimore. Running back Mark Ingram played eight seasons with Drew Brees before signing as a free agent with Baltimore in March. He’s spent the past few months getting to know Jackson, and sees some of Brees’ qualities in the young quarterback. (AP Photo/Gail Burton, File)

OWINGS MILLS, Md. (AP) — Beyond the fact that they're both quarterbacks, it would seem unlikely that second-year pro Lamar Jackson has anything in common with 40-year-old pocket passer Drew Brees.

The 22-year-old Jackson is very adept at running with the football, a quality that last year earned him the starting job with the Baltimore Ravens. Over 18 seasons, Brees has accumulated 758 yards rushing — just 63 more than Jackson rambled for as a rookie.

Yet, take it from someone who knows: There are more similarities between Jackson and Brees than meet the eye.

Running back Mark Ingram played eight seasons with Brees before signing as a free agent with Baltimore in March. He's spent the past few months getting to know Jackson, and sees many of Brees' qualities in the young quarterback.

"Obviously Drew Brees is one of the best to ever do it," Ingram said Wednesday. "But I wouldn't say there's a difference being here with Lamar. He's very competitive, he's a leader, he's a hard worker. He has the desire to be great. He's a great dude, man, a great guy to have in the huddle. Always composed, never gets flustered."

A year ago, Jackson entered his first NFL season as the third quarterback on the depth chart. He saw limited action until an injury to starter Joe Flacco paved the way for Jackson to earn his first start on Nov. 18.

Jackson guided Baltimore to a 6-1 finish, keeping Flacco on the bench even after the veteran quarterback got healthy. Jackson's next task is to come up with an appropriate encore, starting Sunday in the opener against the Miami Dolphins.

Jackson is the focal point of an attack that features his ability to run, pass or pitch. The Ravens showed very little of their new playbook during the preseason, but now that the binder has been cracked the fans can expect to see Jackson at his finest.

"Hopefully it's the best offense they've ever seen," he said. "That's what I'm going for."

As impressive as his ability to slither, juke and scramble is, Jackson's maturity is really something to behold. In the midst of a locker room filled with playoff-tested veterans, Jackson has taken charge.

"Coming in last year in an unknown situation — how much he was going to play, what was going to happen — I've been impressed with how he's taken everything in stride," backup quarterback Robert Griffin III said. "Just to see how he's developed over the past two years from a leadership standpoint, from playing the quarterback position, has just been awesome."

Guard Marshal Yanda, who's preparing for his 14th season, said of Jackson, "He's taken control and has been commanding the huddle well."

Jackson's goal is just to fit in. Being the quarterback doesn't make him any better than the third-string center.

"I look at myself as one of the guys, and I want the guys to look at me as I'm one of them," Jackson said.

Coach John Harbaugh noted: "He's a 22-year-old guy all the time. That's what he is. He's fun to be around and he's got a lot of energy. He laughs, he makes the guys laugh."

Safety Earl Thomas joined the Ravens in March after a nine-year run with Seattle. He had heard about Jackson's skillset before getting a first-hand look at it in practice and in the preseason.

"I've heard of all the great runs and the (Michael) Vick comparisons, but that run against Green Bay, when he juked a guy and then hurdled another, that was exciting to see," Thomas said.

That electrifying preseason touchdown run was called back, but Jackson surely has plenty of those left for the regular season.

"I grew a lot from last year," Jackson said. "I just can't wait to go out there and perform."