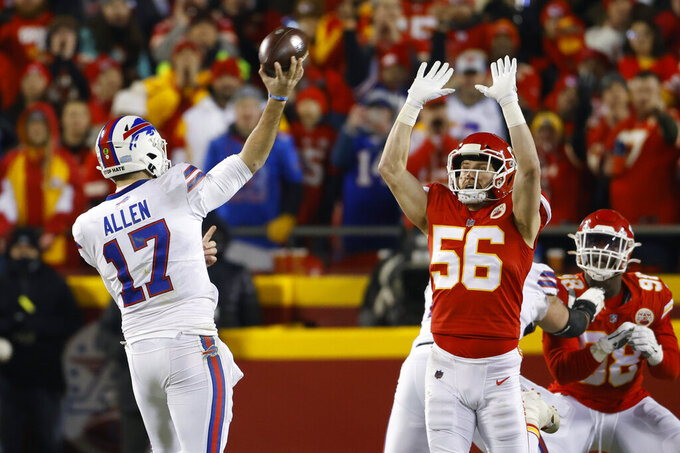 Forget what all those talking heads and self-proclaimed experts are telling you about pro football.

Instead, pick up “Super Bowl Blueprints,” the new book by Hall of Famer Bill Polian and renowned sports journalist Vic Carucci. It's 370 pages of behind-the-scenes and educational reading that provides insight into how eight franchises built great teams.

Polian himself was involved with two of them: the Bills, who went to an unprecedented four consecutive Super Bowls in 1990-93, and the Colts, who won it in the 2006 season. In each chapter, he not only makes observations about those franchises, but Polian interviews key figures in the building of each team.

They save the best for last, with interviews of Tony Dungy, Peyton Manning, Dwight Freeney and Tom Moore bringing readers basically into the game-plan room.

One of hundreds of informative nuggets: Manning's insistence on practicing with wet footballs even though the Colts played in an indoor stadium. It paid off big time in the 2007 Super Bowl in rainy Miami.

Six NFL players, including 2021 All-Pros T.J. Watt and Micah Parsons, are providing opportunities for a military veteran or family to attend next Sunday's Super Bowl.

Also rewarding the vets, partnering with USAA, which provides insurance and other financial services to U.S. military members, veterans and their families, are Rob Gronkowski, Josh Allen, DeAndre Hopkins and Chase Young.

Parsons, a rookie linebacker with Dallas, partnered with AMVETS (American Veterans) to honor Frederick Bates. With more than three decades of military service and assignments across the United States and overseas in Korea, Bates rose through the ranks of the Air Force to Chief Master Sergeant.

“Chief Master Sergeant Frederick Bates is someone our country owes a debt of gratitude to,” Parsons says.”

Bucs tight end Gronkowski teamed with USO to recognize Sgt. Erik Hanno, a Purple Heart recipient who enlisted in the Army in 2006 and served until 2013. He was a team leader and a designated marksman who was injured in Afghanistan.

Bills quarterback Allen and VFW are sending Staff Sgt. Cory Geisler to the big game. After graduating from the University of Wisconsin-Whitewater and spending six years in sales, Geisler enlisted in the Army, where he served from 2005-2012, including a tour in Iraq.

“Giving up a successful career to serve our country and enlist in the U.S. Army is incredibly admirable,” said Allen.

Washington linebacker Young and the National Guard Association are rewarding Darryl Griffing, who spent 27 years in the military, including 14 years of active duty. A captain with the Georgia Army National Guard, he is currently serving full time as a medical operations officer and also served in Afghanistan.

Hopkins teamed with the Wounded Warrior Project to honor Melvin Gatewood, an Army sergeant who during his three years (2003-06) of military service was deployed to Iraq. A Humvee driver and member of the Quick Reaction Force, he was injured on a convoy mission, and earned the Purple Heart. He's now a certified peer support specialist with the Department of Veterans Affairs and a volunteer leader with the Wounded Warrior Project.

For those who can't make it to SoFi Stadium for Sunday's game, or don't want to get a second mortgage to buy tickets on the secondary market, there is an option for getting a feel for the new venue.

A 1 to 50 scale LEGO model of the indoor-outdoor stadium will make its debut next month at Miniland U.S.A., located at the LEGOLAND California Resort. The LEGO stadium structure will join such other Southern California attractions featured in LEGO form as Griffith Park Observatory, Hollywood Bowl and Grauman’s Chinese Theatre.

More than 30 feet long, 15 feet wide and over 4 feet tall, the new exhibit is planned to be the largest LEGO stadium in the world.

“SoFi Stadium is an architectural marvel and is considered one of the most innovative NFL stadiums in the entire league, making it an obvious choice for our first addition in the expanded Southern California region of Miniland U.S.A.,” said LEGOLAND California Resort president Kurt Stocks. “The anticipation of Super Bowl 56 taking place at the life-sized SoFi Stadium in February makes this build even more special for us.”

A team of 25 dedicated Master Model Builders will take more than 6,000 hours and more than 500,000 LEGO bricks to complete the final model of SoFi Stadium before it’s installed this spring.