Post-AB life off to a bumpy start for Steelers 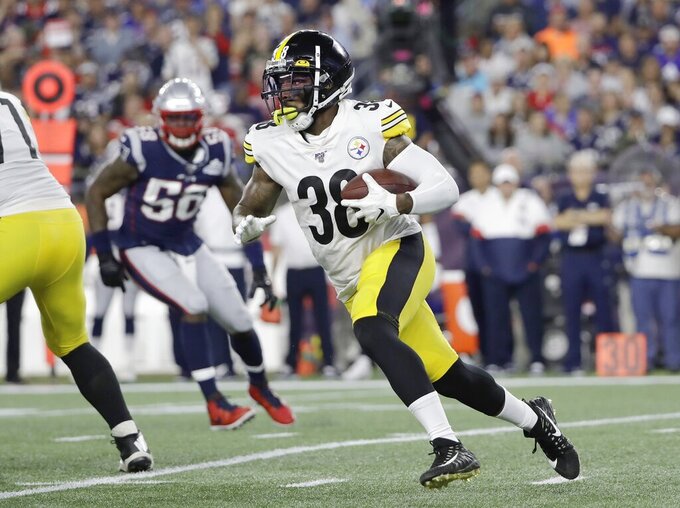 Pittsburgh Steelers running back Jaylen Samuels carries the ball in the first half an NFL football game against the New England Patriots, Sunday, Sept. 8, 2019, in Foxborough, Mass. (AP Photo/Steven Senne)

Dropped passes. No separation. Little excitement on the rare occasion they found themselves with the ball in their hands and room to run. The post-AB era in Pittsburgh began with the group called on to replace him spending most of Sunday night's one-sided 33-3 loss to the New England Patriots chicken-fighting with defensive backs as they struggled to create any sort of breathing room.

"We've just got make more plays for (quarterback Ben Roethlisberger)," said Donte Moncrief, who caught three passes for just 7 yards in his Steelers' debut after being signed in March , four days after Pittsburgh sent Brown to Oakland. "It starts with the whole receiver's room, everybody on offense. We've got to be better."

Roethlisberger finished 27 of 47 for 276 yards and an interception, several of the misfires coming when Moncrief or a teammate would get one or two hands on the ball only to have a New England defender rake it away like a parent admonishing a child for playing with a forbidden toy.

"They got away with some holds last night," Steelers slot receiver Ryan Switzer said of New England's press coverage. "But they play that, 'You're not going to call it every play' (style) so they take their chances and they won more than they didn't."

The Patriots didn't just beat the Steelers, they provided a blueprint for how to keep Pittsburgh in check with Brown now working in New England.

When the teams met last December, the Patriots double-covered Brown and JuJu Smith-Schuster, allowing rookie running back Jaylen Samuels to run for 142 yards in a Steelers' win. The threat of Brown gone, New England dared Pittsburgh's receivers to beat them one-on-one. They couldn't, leading to the franchise's most lopsided Week 1 loss in 22 years, all with the knowledge that Brown now works for the defending Super Bowl champions after agreeing to a one-year deal following his rapid flameout in Oakland.

"I'm not specifically worried about anything relative to Antonio Brown, I'm worried about the guys in the locker room," Pittsburgh coach Mike Tomlin said after falling to 0-4 in New England when Brady is under center. "The quality of the execution and what we did or didn't do. Antonio's been off our team for a number of months. We moved on from that stuff in March."

And moved on to a new kind of drama in the process, one where the issues might not be off the field, but on it.

Not much. The defense still has never intercepted Tom Brady in Foxborough and Brady's numbers in six home starts against the Steelers are hard to duplicate on a video game, let alone real life: 21 touchdowns without a pick.

The offensive line. One of the league's most experienced units, one that features three Pro Bowlers, created very little push against New England's defensive front. As a result, the running game never got going. The Steelers rushed 13 times for 32 yards, 7 of them coming on a scramble by the 37-year-old Roethlisberger.

James Conner managed just 21 yards on 10 carries. Samuels ran it twice for 4 yards and offensive coordinator Randy Fichtner abandoned it after Pittsburgh failed to convert a pair of short-yardage situations in the second quarter. The Steelers instead went with five-receiver sets on a fourth-and-1 and a third-and-goal later in the game, coming up empty both times.

Asked if he'd prefer either he or Conner to get a handoff in those situations, Samuels nodded.

"That's the mindset that we have but we can't call the plays and we've got to go out there and execute whatever the offensive coordinator wants to call," Samuels said. "Of course, running backs we want the ball downhill or just in our hands, period so we can't control that."

Devin Bush racked up 11 combined tackles in his first NFL start, showcasing the speed that made the Steelers trade up to grab the inside linebacker with the 10th overall pick. While Bush did caught up in traffic a couple of times in pass coverage, he was hardly alone in that department.

Moncrief, who could very soon be challenged by James Washington for the No. 2 spot if he can't bounce back quickly.

Hope the problems in the passing game that surfaced against New England were just necessary growing pains. Seattle (1-0) visits Heinz Field on Sunday after giving up 418 yards passing to Cincinnati's Andy Dalton.