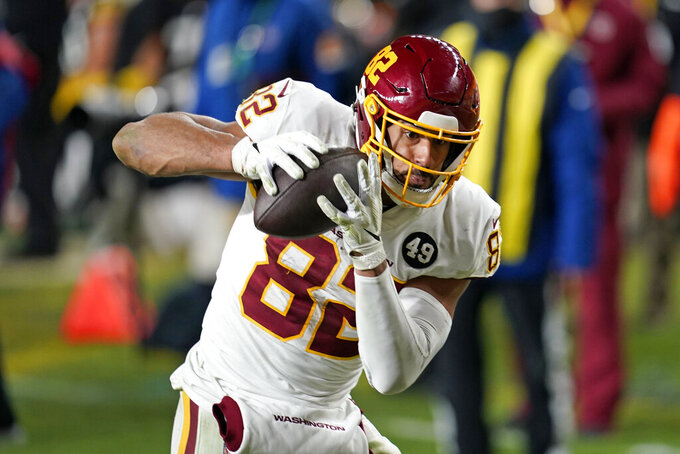 WASHINGTON (AP) — Coach Ron Rivera came prepared with a slide presentation to show his players Tuesday, a day after Washington stopped Pittsburgh’s unbeaten run and remained in the thick of the playoff pursuit in the worse-than-mediocre NFC East.

“We’ll have a little lesson today about humility. I’ve got it all set on the PowerPoint,” Rivera said in a video conference with reporters. “Just because we won this game doesn’t mean we’re going to show up somewhere else and win automatically. We’ve got to earn it. That will be one thing that we will talk about.”

Humility? That he’s throwing around that word now shows what a sudden turnaround it’s been for a club that went 3-13 under Jay Gruden last season and opened its first season under Rivera with a 1-5 record.

At 5-7 heading into next weekend’s game against San Francisco — a contest being played in Arizona because the 49ers had to abandon their home stadium because of the coronavirus pandemic — it’s not as if Washington is a juggernaut. But maybe it can be allowed to feel good about itself while essentially standing even with the New York Giants (also 5-7 but at an advantage because of a 2-0 head-to-head mark) in the division.

Three consecutive victories for Alex Smith and the rest of the group will do that sort of thing, especially when the most recent was by a 23-17 score over the Steelers, who went into Monday’s game 11-0.

Rivera noted that it was exactly a year ago Monday — Dec. 7, 2019 — that he and Washington owner Dan Snyder first spoke about the team, five days after the coach was fired by the Carolina Panthers.

A defense anchored by a front filled with first-round draft picks such as Chase Young, Montez Sweat and Jonathan Allen really shut down Ben Roethlisberger and Co. down the stretch, limiting the Steelers to merely a field goal after halftime. Washington limited Pittsburgh to 21 yards on the ground overall and harassed Big Ben plenty, including three tipped passes by Sweat, the last of which was picked off by Jon Bostic. Sweat said Roethlisberger chatted with him after one play. “He was a little frustrated. I could tell by his demeanor,” Sweat said. “We were getting under his skin.”

Washington’s special teams had some issues, including a pair of penalties in the first quarter — blocking in the back by James Smith-Williams and a hold by Khaleke Hudson — and, most egregiously, a failure by Jeremy Sprinkle to recover a fumbled punt return that was his for the grabbing.

Logan Thomas played quarterback in college, and when he first arrived in the NFL, but eventually switched to tight end and is really blossoming now. He had career bests of nine catches and 98 yards against the Steelers, along with a 15-yard TD connection with Smith, and even jumped in to grab a fourth-quarter fumble by teammate J.D. McKissic, taking the ball away from Pittsburgh’s T.J. Watt. “Logan just continues to grow,” Rivera said.

There was a bad drop by receiver Steven Sims early in Monday’s game, and a 50-yard TD pass from Roethlisberger to James Washington that made it 14-0, but given how the night wound up going, what’s there really for Rivera to complain about?

Leading rusher Antonio Gibson limped off the field after his second carry against Pittsburgh and was treated for a left toe injury. The rookie’s status remained a mystery to those outside the team Tuesday, because when Rivera was asked about Gibson, this was the reply: “I don’t talk to the trainers until I get done with this (video conference). It’s just something I try to do — that way I can’t answer your questions and give you the right answer. It’s a way of me avoiding it. Really, that’s it. ... The less our opponent knows, the better.”

2 — The average number of second-half points Washington has allowed opponents during its current winning streak.

Some familiar faces for both teams when head coach Kyle Shanahan, who was Washington’s offensive coordinator from 2010-13, and the 49ers (5-7) play against Smith, who was drafted No. 1 overall by San Francisco in 2005, and Washington in a matchup that could affect the NFC playoff race.