QB Fitzpatrick glad to be on move again, this time to Miami 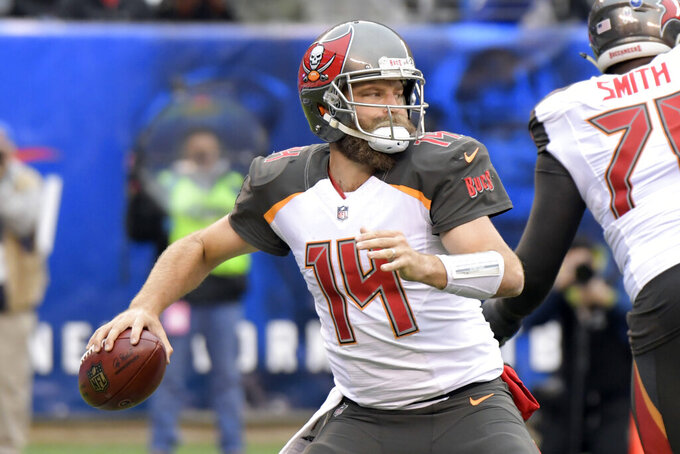 FILE - In this Nov. 18, 2018, file photo, Tampa Bay Buccaneers quarterback Ryan Fitzpatrick (14) looks to pass during the first half of an NFL football game against the New York Giants in East Rutherford, N.J. Fitzpatrick, who played last season for the Buccaneers, signed an $11 million, two-year contract Monday, March 18, 2019, with the Miami Dolphins. (AP Photo/Bill Kostroun, File)

MIAMI (AP) — Experience tells Ryan Fitzpatrick that his job with the Miami Dolphins might not last long.

After all, they are his eighth team. And for now, at least, he is glad to be their starting quarterback.

"I'm going to come in from day one and act like and be the starting quarterback for this organization, until they tell me I'm not," Fitzpatrick said Tuesday, one day after signing a two-year, $11 million deal.

He replaces the departed Ryan Tannehill and becomes a caretaker until the Dolphins draft a franchise quarterback, perhaps next month but more likely in 2020.

Most of the Dolphins' offseason moves under new coach Brian Flores have positioned them for a poor season, followed by a high draft pick and big splash in free agency next year. In choosing to sign with the Dolphins, Fitzpatrick said he was not fazed by their bleak immediate outlook.

"I've been in pretty much every situation you can imagine in my career," he said. "There are 32 of these starting gigs in the NFL, and this is one of them. The opportunity to be one of those 32 guys is an amazing privilege and honor. When they approached me about signing on, I was so excited about the chance to get on the field and play."

This year Fitzpatrick, 36, could become the first quarterback to throw a pass for eight teams. Always plagued by inconsistency, he started seven games for Tampa Bay last season and had four 400-yard passing games before losing the No. 1 job to Jameis Winston.

His average of 9.6 yards per attempt for the year was the NFL's highest since Kurt Warner in 2000, and he said he is eager to keep playing.

"I've been very fortunate," he said. "Physically I feel great. For having a 14-year career and as many games as I've played, physically I feel probably as good as I could ever hope for."

Fitzpatrick, who has seven children, is changing teams for the fifth time since 2013, but he's not sorry about all the moving.

"I've loved it," he said. "As a family we've looked at it as an adventure every time we've moved. We've had such a great time with it, meeting new people. The friendships we've made have truly been amazing for us. It's not something I would change."

Despite the latest relocation, to sometimes steamy South Florida, Fitzpatrick said he will keep his trademark beard. It made it through two seasons in Tampa, which is nearly as hot.

His new teammates include safety Minkah Fitzpatrick, who last season filed for a federal trademark of the nickname "FitzMagic." The Dolphins' new QB also has that nickname but does not anticipate any issues.

"I haven't talked to or met Minkah yet," Ryan said. "First we've got to figure out if we're related. But I think there's plenty of magic to go around."