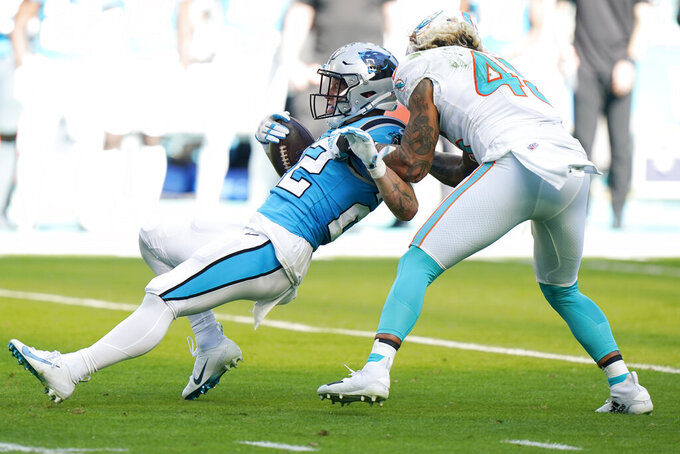 And the results weren’t pretty on Sunday.

Newton was sacked five times, threw two interceptions and finished 5 of 21 for 92 yards in Carolina’s 33-10 loss to the Miami Dolphins, which dropped the Panthers to 5-7 heading into the bye week. Newton has now lost his last 10 starts for Carolina dating back to the 2018 season, and the optimism over the team’s win on the road at Arizona three weeks ago — in which Newton scored two TDs coming off the bench — has vanished.

For many Carolina fans, Newton's return represented the answer to all that was hindering the Panthers after a year-and-a-half of struggles with Teddy Bridgewater and Sam Darnold at quarterback.

But the reality is it'd be extremely difficult for any quarterback to succeed behind this offensive line, a unit that has been vastly ignored in recent drafts and needs an upgrade at every position except right tackle. Things got so out of control on Sunday that coach Matt Rhule made the decision to remove Newton in the second half rather than risk him getting injured.

That is not to give Newton a free pass. Many of the 2015 league MVP's passes were often off the mark and he didn't show the ability to improvise and make plays.

“The quarterback is only as good as the people around him, but he does have to make those people better," Rhule said Monday.

Rhule said after watching game film that he “absolutely anticipates” Newton starting again when the Panthers host the Atlanta Falcons on Dec. 12, even with Darnold expected to begin workouts again next week.

Newton, who didn't sign with the Panthers until Nov. 11, said he plans to use the bye week to take a deep dive into the offense.

“It really got exposed because of the situation,” said Newton, who struggled with Miami's zero-blitz scheme. “Not having a full grasp. But it’s not nobody to blame more so than just the situation that I came into. So having this week to kind of self-scout, so to speak, and really dive into the root of what this offense is about — that’s what I plan on doing.”

Pretty much nothing. The offense can't move the ball with any consistency and now the defense is trying to do too much to overcompensate for the offense's ineptitude by getting out of position. Carolina was No. 1 in pass defense two weeks ago but has allowed four combined touchdowns passing in the last two games to Taylor Heinicke and Tua Tagovailoa.

Left tackle. Aside from determining their direction at quarterback, the Panthers' biggest priority next offseason will be finding a long-term solution at left tackle. Free agent pickup Cam Erving has struggled with injuries and hasn't been as effective as the coaching staff had hoped. Fill-in starter Dennis Daley is coming off a bad game vs. Miami. Rookie Brady Christensen, with his shorter arm length, doesn't seem to be the answer at left tackle, either. The way things are trending the Panthers could have a top 10 pick and, providing they don't take a quarterback it would seem left tackle is the glaring need to address.

DT Derrick Brown. In a surprising move, the Panthers benched the No. 7 overall pick in the 2020 NFL draft on Sunday following a poor performance the week before against Washington.

“He is a young player that needs consistency to his game,” Rhule said. “Sometimes when you're a young player and you are drafted high you put a lot of pressure on yourself to get more sacks and have more production and you get away from the fundamentals.”

Rhule said he thinks Brown responded well to not starting and played better against Miami coming off the bench. Still, the fact the Panthers had to bench Brown to send a message has to be a little disconcerting.

Running back Christian McCaffrey has been placed on injured reserve and is done for the season. He was limited in the second half of Sunday's game after rolling his ankle. Because of his anticipated recovery time and given that it would be his second time on IR, the news means McCaffrey will miss out on Carolina’s final five regular-season games following its bye week.

5.8 — Cam Newton's quarterback rating against Miami, the lowest of his 11-year NFL career.

The Panthers have finally made it to the bye week and will have a chance to regroup. Despite a 5-7 record, the Panthers aren't out of the wild-card hunt, but their road to the postseason remains largely an uphill climb with two games remaining against Tampa Bay and one against Buffalo.