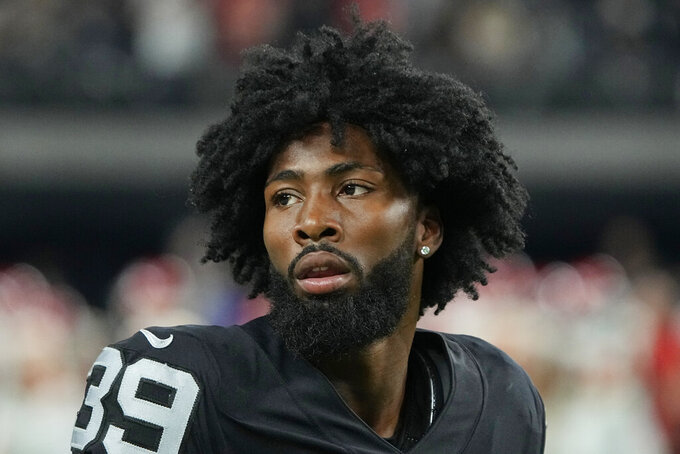 FILE - Las Vegas Raiders cornerback Nate Hobbs warms up before an NFL football game against the Kansas City Chiefs, Nov. 14, 2021, in Las Vegas. Hobbs was arrested on a misdemeanor DUI charge shortly after the team returned from a road game in Indianapolis. The Las Vegas Metropolitan Police Department said in a statement Monday, Jan. 3, 2022, that dispatch received a call at about 4 a.m. about a driver asleep inside a vehicle parked on an exit ramp of a parking garage. (AP Photo/Rick Scuteri, File)

The Las Vegas Raiders have dealt with an email scandal that forced coach Jon Gruden out after five games, and a fatal drunken driving crash that led to the release of star receiver Henry Ruggs III.

Yet they still find themselves in position to make the playoffs for the second time in 19 seasons.

Now as they prepare for a season-ending showdown against the Los Angeles Chargers they learned that rookie cornerback Nate Hobbs has been arrested on a misdemeanor DUI charge.

Bisaccia had no more details on Hobbs' status as the Raiders main focus is on the Chargers following Sunday's come-from-behind 23-20 win at Indianapolis that set the stage for the big finale.

With a win at home Sunday night against the Chargers, the Raiders (9-7) will make the playoffs for just the second time in the past 19 seasons. Las Vegas also can get in with one loss by Pittsburgh and a Colts loss to the Jaguars on Sunday.

The Raiders have done a good job to get into this position by winning the past three weeks by a total of nine points. A struggling offense has made just enough plays in key spots, the defense has held firm and kicker Daniel Carlson has made two walk-off field goals.

“Red Zone Renfrow.” The Raiders have had issues scoring TDs in the red zone this season but the one reliable option has been slot receiver Hunter Renfrow, who has caught seven of Carr's 15 TD passes in the red zone. That's the most in a season for any Raiders player since at least 2000 and is tied for the sixth most of any wide receiver this season.

“He makes big plays in big situations, and he’s done it his whole career,” Bisaccia said. “He did it at Clemson and now he’s doing it at the National Football League. I can’t say enough about the chemistry between him and Derek and his ability to understand the field or get himself in open positions.”

Takeaways. The Raiders' defense has cOme up with some big plays during this win streak but haven't gotten a single takeaway. The Raiders are the fifth team in the past 60 years to win three straight games without a takeaway and they rank second to last in the NFL with 13 on the season.

Zay Jones had eight catches for 120 yards for his most prolific game in two-plus seasons with the Raiders. The eight catches tied a career high set in 2018 with the Bills, and Jones had his first 100-yard receiving game in five NFL seasons. Jones has at least five catches in four straight games.

Alex Leatherwood. The rookie guard committed a key false start that thwarted a red-zone drive. Leatherwood has been called for 14 penalties this season, tied for the second most in the NFL, including a league-worst seven false starts.

The Raiders hope to get back TE Darren Waller this week after his return from a knee injury was delayed last week when he went on the COVID-19 list. Waller hasn't played since Thanksgiving.

The Raiders host the Chargers on Sunday night, with the winner going to the playoffs in the regular season's final game.