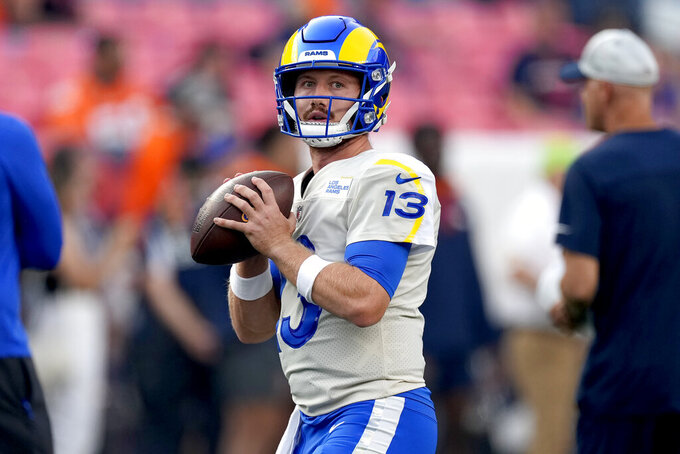 On the occasions he does, such as when Matthew Stafford got a veteran rest day Wednesday, Wolford has to make the most of them, especially after missing time last month because of appendicitis.

“John had a good day. Really competitive work,” offensive coordinator Kevin O’Connell said. “For John, even going back to when he did have that time missed in training camp, every rep we can get him now is really good. He’s in a good place right now, volume wise, throw wise, all the things we kind of build up towards the season doing. But getting him a full day kind of in that first huddle, anytime you can get that for your number two guy it’s huge, as long as it’s not at the sacrifice of the starter’s reps.”

O’Connell said Stafford was held out of practice as part of a plan established by the Rams’ sports medicine staff to make sure the their new quarterback is ready to go for the season opener against Chicago on Sept. 12. That created a valuable opportunity for Wolford and third-stringer Bryce Perkins.

Wolford usually spends the week leading up to a game playing for the scout team offense, which simulates the opposing team so Los Angeles’ starting defense can get familiar with schemes, plays and tendencies they might see. He’ll also be standing behind the starter whenever they work against the scout team defense, figuring out where to go with the ball in certain situations.

Whatever live reps Wolford might get, which are typically with the second unit offense, do carry value.

“So I’m still seeing coverage, I’m still playing ball, I’m still trying to read things out, which is great. Which keeps me sharp for when I have to play. And then as long as I’m locked into the game plan, it’s been, I think, a productive way to go about it,” he said.

But there is something different about working with the starters. The speed of the game is that much faster, as the undrafted free agent from Wake Forest found out in his first career start in the season finale against Arizona after then-starter Jared Goff had dislocated his thumb.

“I was like 0 for 4 with a pick to start, so I think it would be fair to say I was pressing. Once I got hit and started rolling, I thought I played pretty damn good until the end of the game. We should have scored a lot more,” he said of the 18-7 win, which secured a postseason berth.

Wolford started the NFC wild-card playoff game at Seattle the following week. While he was sustained a neck injury in the first half and did not return, the experience confirmed that Wolford has a place in the NFL.

“It was more stress than I’d like to be for a game, but now I feel much more secure, comfortable and ready to play whenever called upon,” he said.

Should Wolford ever have to replace Stafford during a game because of injury, O’Connell said his most important duty is being able to execute the plan for that particular week. However, there will be planning ahead of time to make sure the backup has the best chance of success in critical moments.

“Situationally, that’ll be something that you sit down with those guys and, ‘Hey, what are your favorite third and 2-5 calls? What are your favorite red zone, inside the 5, inside the 10, whatever it is.’ Calls that if you do go in there and we got to go win the game, we can activate, and I can pass that information along to Sean (McVay), and we can all be on the same page about what … at least mentally that stuff they feel most comfortable with,” O’Connell said.

NOTES: DL Aaron Donald missed practice because his wife is about to give birth.