Rams' new defense gets off to strong start in beating Dallas 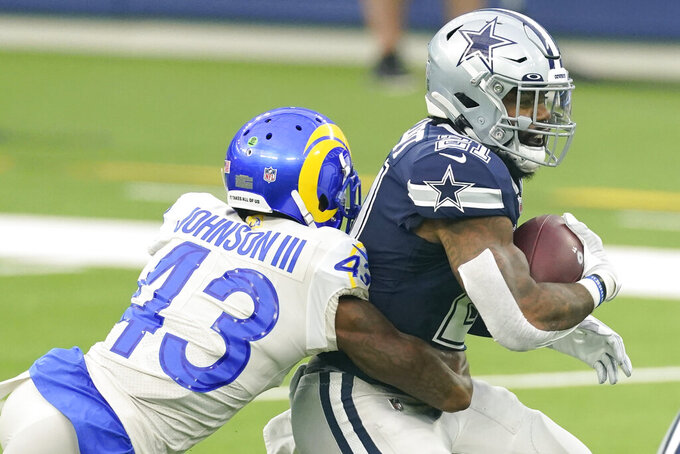 The Rams yielded 380 yards to the Dallas Cowboys on Sunday night in Los Angeles' 20-17 victory at the inaugural game at SoFi Stadium. As usual, the pure yardage obscured the full picture of a defense's effectiveness.

Only 139 of Dallas' yards came after halftime, along with only three points — and those were on a short field due to Jared Goff's only turnover. Otherwise, the Rams repeatedly shut down the Cowboys' star-studded offense, making big plays at key moments and getting the benefit of one costly Dallas penalty.

“I thought our offense slowed up in the second half, but the defense picked up the slack,” McVay said. "That’s what team football is all about. I like the way our defense settled in the game."

McVay raised eyebrows around the league last winter when he jettisoned veteran defensive coordinator Wade Phillips after a third straight statistically solid season for a winning team. The defense's first game under rookie replacement coordinator Brandon Staley wasn't a masterpiece, but it was barely enough to make McVay 4-0 in season openers.

Most encouragingly, the Rams stopped Dallas on nine of its 12 third downs and twice on fourth down, improving in an area that caused ample concern last year.

“Week 1 is always a little bit rougher, knocking the rust off,” Ramsey said. “But it was good to be able to come up big and make a play for the team.”

The Rams' balanced, productive offensive game was encouraging for a unit that struggled regularly in the second half of last season, endangering McVay's reputation as an offensive savant. Los Angeles put up 422 yards against Dallas and consistently moved the ball all night with 40 rushing plays and 31 pass attempts, even going 9 for 17 on third downs. Veteran running back Malcolm Brown got 79 yards and rookie Cam Akers added 39, while each of LA's top four receivers and tight end Tyler Higbee had at least one important catch.

The offense only scored 20 points because the Rams repeatedly failed in the red zone, amplifying the concerns about McVay's conservative play-calling and Goff's execution in big situations. Los Angeles opened each half with a touchdown drive, but otherwise never reached the end zone. The Rams settled for three short field-goal attempts by rookie kicker Samuel Sloman, who made two.

Safety Jordan Fuller, a sixth-round pick out of Ohio State, unexpectedly won a starting job in training camp, even holding on to it after returning starter Taylor Rapp returned from injury. Fuller then led the Rams with eight tackles, including “the play of the game,” according to McVay, when he tackled Cowboys receiver CeeDee Lamb in the open field short of the marker on fourth down early in the fourth quarter. “All I can say is I really felt prepared for this moment, coming from Ohio State and also playing against our offense every single day in camp,” Fuller said Monday.

Rapp played just 15 defensive snaps after being the Rams' third-leading tackler and starting 10 games last season. Inside linebacker Troy Reeder played only on special teams after starting eight games last year as a rookie, with Staley apparently settling on Micah Kiser and Kenny Young as his first choice inside LBs.

The Rams escaped with no significant injuries. Tight end Gerald Everett hurt his back in the second half and played only 24 snaps, but he returned to the game after the injury. Los Angeles is flush at tight end with Higbee, Johnny Mundt and rookie Brycen Hopkins.

4: The number of fair catches on punts by receiver Cooper Kupp, the Rams' surprising choice as their punt returner. Not many receivers of Kupp's accomplishments and salary are still out there risking their livelihoods in the pinball machine that is kick returning. Kupp made a fair catch every time against Dallas, but says he won't hesitate to run with it: “If you step on the field trying to protect yourself, you're going to get hurt. The whole thing is to step on that field going full speed.”

Getting comfortable on the road, a traditional strength of McVay's teams. The Rams visit the Philadelphia Eagles on Sunday to begin a stretch with four of five games away from SoFi, including three East Coast trips. They visit Buffalo the following week, but they'll fly home between games because McVay says the hotel quarantine restrictions necessary to stay out East probably aren't worth the reduction in travel.