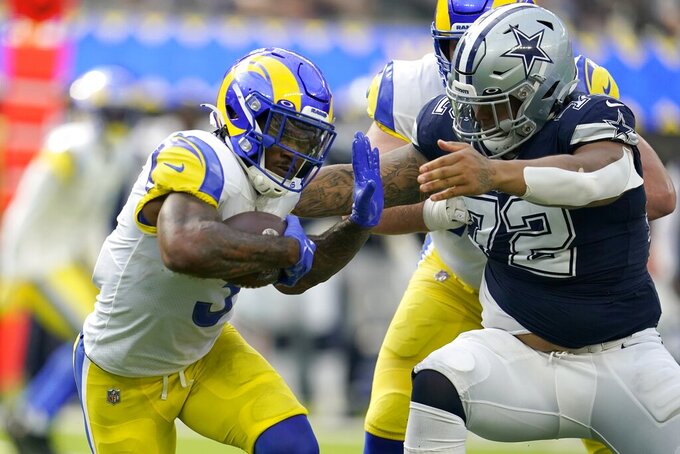 THOUSAND OAKS, Calif. (AP) — Running back Cam Akers will not play for the Los Angeles Rams against Carolina on Sunday after missing two days of practice this week for what coach Sean McVay called personal reasons.

McVay would not give further details Friday when asked about Akers' circumstances, though he did say the Rams' leading rusher was not away from the team for the past two days because he was injured.

When asked whether Akers would be part of the Rams going forward, McVay replied: “We’re working through some different things right now, so hopefully you guys understand and respect that.”

McVay also said the team wanted to keep it “in-house,” later adding that the personal reasons cited for Akers' absence are “more like we're dealing with things internally. This is kind of uncharted territory. ... He's going to be OK."

Akers practiced with the defending Super Bowl champions Wednesday, but wasn't with the team Thursday or Friday.

“He’s good,” said running back Darrell Henderson, who is likely to get most of the Rams' workload in Akers' absence. “We trust that he’s going to be good. So he’ll be all right. We’re going to do this for him.”

Henderson claimed he doesn't know much about the issues keeping Akers away from the Rams.

“That’s on Coach and Cam to talk," Henderson said. "I don’t know what’s going on. ... You all probably know more than I know. I just come in and go to work.”

But when asked if he thinks Akers will be back with the Rams this season, Henderson replied: “Oh yeah.”

Akers has rushed for 151 yards and a touchdown this season for the Rams, who have the NFL’s worst rushing offense at just 62.4 yards per game. Akers has been unproductive in the ground game by most statistical measures while running behind an offensive line missing three starters and two backups due to injury.

Akers played in each of the Rams’ first five games this season, but is averaging just 3.0 yards per carry after gaining 33 yards on 13 attempts last week against Dallas. He has acknowledged he is still attempting to recover his peak explosiveness after tearing his Achilles tendon during preseason workouts last year.

Henderson didn’t get a carry against the Cowboys, but was used extensively as a receiver. He has only 138 yards rushing this season.

The Rams (2-3) have lost back-to-back games. Los Angeles’ bye is next week, and when asked if the Rams expect to be in the market for a running back over the break, McVay replied: “I don’t know. I wouldn’t say no, ever. We’ll always explore our options if there’s chances to upgrade. That’s probably not something that’s at the forefront.”

Brown spent six seasons with the Rams from 2015-20, and he scored the first touchdown in SoFi Stadium history. After a one-year stint with the Miami Dolphins, he returned to LA last month.

Akers rushed for 625 yards as a rookie out of Florida State in 2020 after the Rams selected him with their highest pick in any of the past five drafts. He recovered remarkably quickly from the Achilles injury to rejoin Los Angeles for the regular-season finale and its playoff run to a championship.

According to the NFL’s Next Gen Stats, Akers has minus-0.98 rush yards over expected per attempt this season, which is the second-worst performance in the league. He has just 86 yards after contact and has broken only one tackle all season.

NOTES: LG David Edwards will visit with concussion specialists in Pittsburgh, McVay said. Edwards is on injured reserve after returning last Sunday from a one-week absence with an apparent concussion, only to take another hit to the head against the Cowboys. ... WR Cooper Kupp, DT Aaron Donald and TE Tyler Higbee are all expected to play Sunday despite being questionable with minor injuries. Rookie DB Cobie Durant (hamstring) and backup QB John Wolford (neck) are also questionable.