Rams rolling toward playoffs, but with several concerns 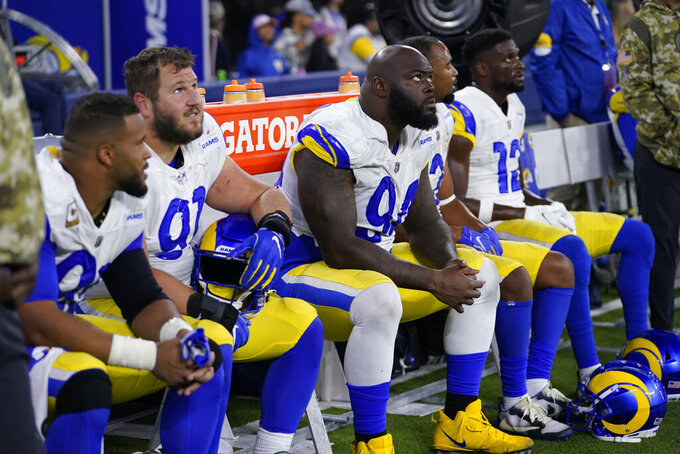 Members of the Los Angeles Rams look on during the second half of an NFL football game against the Tennessee Titans, Sunday, Nov. 7, 2021, in Inglewood, Calif. (AP Photo/Marcio Jose Sanchez)

LOS ANGELES (AP) — The Los Angeles Rams have hit the halfway point of the season as a clear NFC contender boasting a star-studded defense and a prolific passing offense.

Coach Sean McVay's team also has plenty of potentially serious flaws in its high-risk, high-reward strategy of chasing a championship.

The Rams dropped to 7-2 on Sunday night with a 28-16 loss to the Tennessee Titans, snapping a four-game winning streak. Los Angeles was excellent in stretches and ended up dominating in total yardage, but Matthew Stafford's back-to-backinterceptions in the second quarter put his team in an 11-point hole from which it couldn't escape, even with 42 minutes of clock time to do it.

That's the looming problem for the Rams, who are relying on everything to go right in several key areas.

In the big picture, the Rams are in great shape, with more victories than all but one other NFL team. They're scoring 29 points per game with an offense averaging 399 yards per game, while their defense is moving up the league rankings with another huge boost expected when Von Miller makes his Rams debut, perhaps Monday night at San Francisco.

But potential concerns are lurking everywhere just below the Rams' shiny surface.

The only team with eight wins happens to be in the Rams' division — and Arizona already beat Los Angeles once, meaning the Rams could easily end up as a wild card playoff team.

Stafford's offense is producing splendidly, but it's relying heavily on good health and the continued effectiveness of almost exactly the same schemes and personnel McVay has been using all year.

Not only did McVay use “11 personnel” — formations with three receivers, one tight end and one running back — on all 74 offensive snaps against the Titans, eight of his 11 starters never left the field, while receiver Van Jefferson and tight end Tyler Higbee only missed five combined snaps.

Such unbending reliance on a single setup is almost unheard of in the modern NFL. Aside from making the Rams easier to scout, it also forces Los Angeles to rely heavily on its starters' continued health: If Kupp, Robert Woods or Jefferson gets hurt, Stafford will have to throw to untested rookie Ben Skowronek, an inexperienced veteran salvaged from the practice squad or some brand-new signee.

“I think you do want to be mindful of the workload on those guys when they’re playing so many snaps,” McVay said Monday. "There’s pros and cons to both, and so we will look at that. I do think that mixing in some different personnel groupings from time to time certainly doesn’t hurt, even if you are a majority 11-personnel outfit.”

But McVay's disinterest in expanding his personnel groupings already cost him DeSean Jackson, who abandoned his hometown team last month after just seven games because he played on only about 22% of their offensive snaps.

Just like general manager Les Snead's philosophy of trading draft picks for impact players, McVay's strategies are splendid when they're working. The potential drawbacks of LA's brash, confident ways are still looming on the horizon — but until they get closer, the Rams are in great shape.

Stafford has been everything the Rams wanted. He is the NFL’s passing leader with 2,771 yards and second with 23 TD passes. Even after his clunker against Tennessee, Stafford's 111.0 passer rating is the second-best among quarterbacks with 100 attempts.

Behind the dominant Jalen Ramsey, the Rams' secondary still looks shaky. Darious Williams, Dont'e Deayon and rookie Robert Rochell all made mistakes in coverage against the Titans. Ryan Tannehill only passed for 194 yards, but other teams could be huge trouble.

It's tempting to say Kupp is having the season of his life, but there's little reason to think he can't keep this up with Stafford. Kupp is the fifth receiver in NFL history to record at least 1,000 yards and 10 TDs in his team's first nine games, joining four Hall of Famers.

The Rams' offensive line had been quite solid all season until the Titans beat them up. Stafford could have helped out on most of his five sacks by getting rid of the ball, but Tennessee also held the Rams 94 yards on the ground. The loss was a gut check for the unit on which everything else depends.

Cam Akers was lost to an Achilles injury before the season began, but the running back has a chance to return for a playoff game. LB Justin Hollins' pectoral injury ruined his potential breakout season, and DT Sebastian Joseph-Day's pectoral injury did the same. Miller should be able to play soon, although McVay hinted Monday that the Rams are deciding whether it's worth using him before the bye.

115 — The Rams' total penalty yards against Tennessee and the most they've ever racked up in McVay's 73 games. Discipline hasn't been a problem in Los Angeles for years, but this blip was concerning.

Kyle Shanahan has owned McVay the past two seasons even while the Rams were significantly better than San Francisco in the standings, so this trip to face the underachieving Niners carries uncommon weight for McVay. Los Angeles then gets its bye before a tough finish including trips to Green Bay, Arizona, Minnesota and Baltimore.