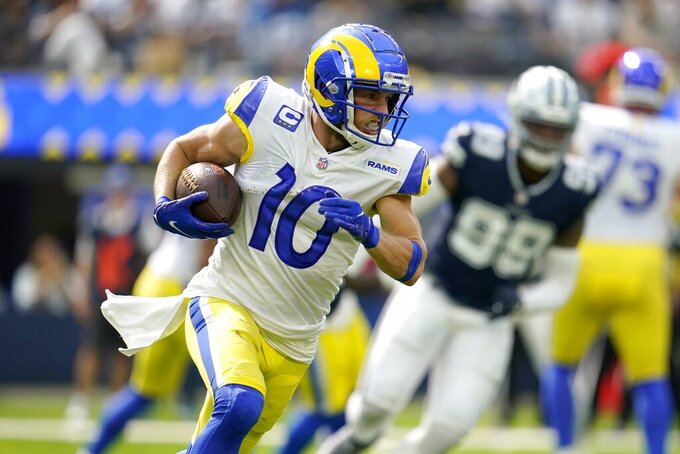 Los Angeles Rams wide receiver Cooper Kupp (10) sprints to the end zone for a touchdown in the first half of an NFL football game against the Dallas Cowboys, Sunday, Oct. 9, 2022, in Inglewood, Calif. (AP Photo/Marcio Jose Sanchez)

THOUSAND OAKS, Calif. (AP) — The Los Angeles Rams don't have the least productive running game in the NFL just because of their injury-plagued offensive line.

The defending Super Bowl champions also need much better play from their running backs, who are struggling right along with the men blocking for them.

Cam Akers and Darrell Henderson don't have much room to run, but they're also not doing enough with the chances they're getting, according to their coaches. Offensive coordinator Liam Coen was the latest to demand more out of the Rams' ball carriers Thursday.

“Creativity,” Coen said when asked what the Rams need if they hope to run the ball better.

“It’s not always going to be clean,” Coen added. “It’s not always going to be a perfect, wide, gaping hole. Running backs are special because they’re creative, since flag football. You go back to the early days of playing the position, and sometimes when the ball is supposed to go here, it’s structured to go there, sometimes that stuff has got to go out the window and guys have got to go and be playmakers and be special with the ball in their hands.”

The numbers bear out Coen's declaration: According to the NFL's Next Gen Stats, Akers has minus-0.98 rush yards over expected per attempt — the second-worst performance in the league — while Henderson is the seventh-worst at minus-0.45 yards.

“When we’re 1-on-1 in space, we have to take advantage of that, and that’s been also a point of emphasis,” Coen said.

Akers got 13 of the Rams' 15 rushing attempts in last week's 22-10 home loss to Dallas, but he managed only 33 yards. Henderson made four receptions for 30 yards, but he didn't get a single carry on the stat sheet despite playing 37 snaps, with his only carry in the third quarter wiped out by a holding penalty.

A running attack averaging an NFL-low 62.4 yards per game is one reason Los Angeles has scored only one touchdown in its last nine quarters of play. After being held out of the end zone completely by San Francisco two weeks ago, the Rams got there only once against the Cowboys.

At least that one touchdown was a beauty: A 75-yard reception by Cooper Kupp, who ran 71 yards after the catch. Kupp is also dealing with a minor foot injury that irritated him two plays before his TD ramble, but the NFL's receptions leader plans to play Sunday.

“Everyone here knows that we’ve got the right people that want to right the ship, want to go out there and win,” Kupp said Thursday. “So the preparation, the process is going to be there. It’s just about making it come alive on game day.”

The Rams (2-3) are likely to be without five injured offensive linemen when they host the struggling Carolina Panthers (1-4) on Sunday in LA's final home game before its bye. Veteran offensive linemen Oday Aboushi and Matt Skura have yet to play on offense for the Rams, who signed them last month when the O-line injuries began to pile up.

Coen indicated that Rams fans hoping for reinforcements might need to wait at least another week.

“Is this the time to re-evaluate everything we’re doing up front? Sometimes you just don’t have a lot of time to do that in a one-week span,” Coen said.

“So maybe that’s something we look at after this game," he added. "But I do think right now, a lot of issues we had in this past game were communication, and everybody being on the same page. And when you have multiple different players playing up front in every single game, there’s no chemistry. There’s no continuity that you’re able to build on, because it's been a little bit of a carousel with those guys.”

NOTES: Kupp (foot), TE Tyler Higbee (ankle) and rookie DB Cobie Durant (hamstring) were limited in practice Thursday. S Taylor Rapp (ribs) was a full participant, as was WR/KR Brandon Powell (hip). ... All-Pro DT Aaron Donald (foot) sat out for the second straight day, but he says he expects to play Sunday: “I’m doing good. Just making sure that I’m as healthy as I can. Ain’t no limitations.”