Ravens can keep control of AFC North with win over Miami 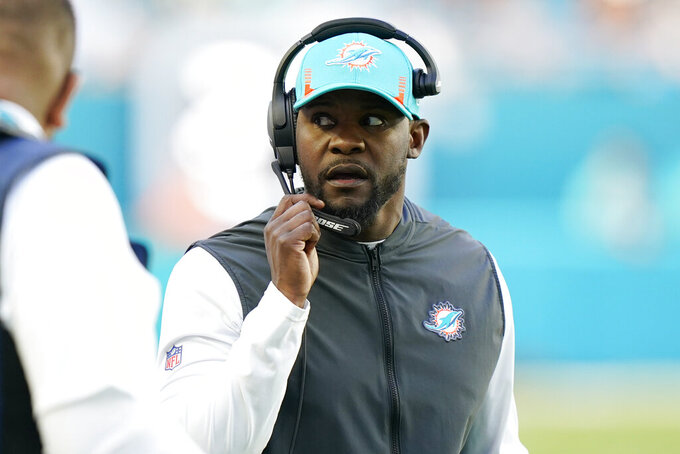 Miami Dolphins head coach Brian Flores talks on the sidelines during the first half of an NFL football game against the Houston Texans, Sunday, Nov. 7, 2021, in Miami Gardens, Fla. (AP Photo/Wilfredo Lee) 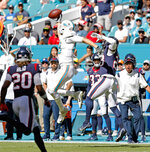 MIAMI GARDENS, Fla. (AP) — The previous time Baltimore quarterback Lamar Jackson came back to play in his native South Florida, he put on an absolute show.

Miami can only hope this trip goes differently.

It's a big weekend for Jackson, who gets his number retired at Louisville on Saturday — but first, he'll be leading the Ravens against the Dolphins on Thursday night. Jackson grew up in a poor neighborhood about a half-hour north of Hard Rock Stadium, and like many others who found their way from the Miami area to the NFL, he said coming home to play the Dolphins is of enormous personal significance.

“He’s dynamic, explosive," Dolphins coach Brian Flores said. “There are a lot of words like that you can use to describe Lamar."

Ravens 59, Dolphins 10 was the final score that day, the first game of Flores' tenure in Miami ending with a resounding thud. Jackson had a perfect passer rating, the Ravens ran out to a 42-10 lead at halftime and stayed on cruise control from there.

“I tried to not remember much from it," Miami tight end Mike Gesicki said when asked what he remembers about 2019.

A win would ensure Baltimore (6-2) stays at least one game clear of the pack in the AFC North with Pittsburgh (5-3), Cleveland (5-4) and Cincinnati (5-4). That division is one of two where all four teams have winning records to this point; the AFC West — where two 5-3 teams are leading two 5-4 teams — is the other.

A win would also give Jackson another happy homecoming.

“Any time you play in the NFL, it’s a great place to play football, no matter where you’re at," said Ravens defensive end Calais Campbell, a former University of Miami standout. “But when you play in places that you have some history, some friends, it adds a little extra."

The NFL has already seen a historic number of close Thursday games in 2021. Of the nine Thursday games played so far, five have been decided by three points or fewer. That’s the most such games in a single season in league history. There were four games decided by three or fewer points on Thursdays in many other seasons, most recently 2019 and 2016. In all, seven of the nine Thursday games this season were single-digit affairs; the exceptions were Carolina’s 15-point win over Houston in Week 3, and Indianapolis’ 15-point win over the New York Jets last week.

Baltimore and Miami are the only two teams in the NFL without a 50-yard play this season. The Ravens’ longest pass play this season has gone for 49 yards, done twice (Jackson to Marquise Brown in Week 4 against Denver, and Jackson to Sammy Watkins in Week 1 against Las Vegas). Baltimore’s longest run so far is a 35-yarder by Ty’Son Williams against the Raiders.

Miami’s long play in 2021 is a 42-yard pass from Jacoby Brissett to DeVante Parker against Indianapolis in Week 4. The Dolphins’ long run was a 24-yarder by Malcolm Brown against the Raiders in Week 3.

Last weekend’s win over Houston continued a trend of success in the season’s second half for the Dolphins under Flores. Midway through his third season, Miami is 4-17 in games played in September and October; that’s the second-worst record in that span in the NFL, ahead of only the Jets (3-18). But the Dolphins are 13-7 in games played in November, December and January — the seventh-best record in the NFL over those months.

The Ravens are one of two franchises with three wins of at least 32 points over the Dolphins. Kansas City is the other.

Technically, a team from Baltimore has topped Miami by such a lopsided margin four times — the Baltimore Colts beat the Dolphins 35-0 on Nov. 1, 1970. That game was notable because it was the first time a new Miami coach named Don Shula coached against his former club.

Baltimore has four players with deep ties to South Florida. Jackson, Brown and RB Devonta Freeman are all Miami-area natives, and Campbell played his college ball at Miami. That doesn’t even include Watkins, who grew up about two hours away in Fort Myers.