Ravens hoping to put 2021 injuries behind them 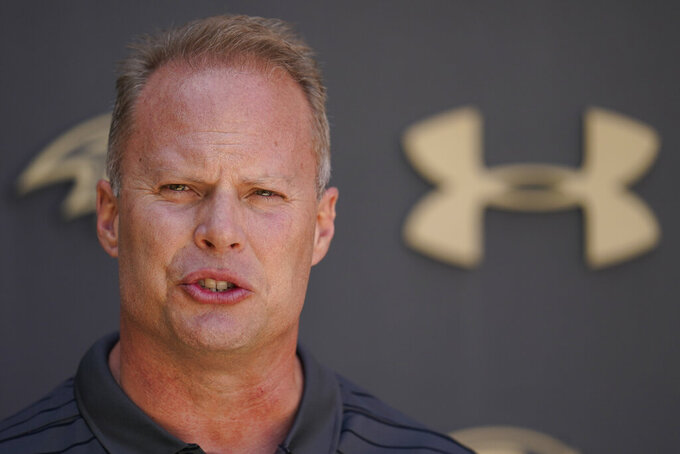 OWINGS MILLS, Md. (AP) — The Baltimore Ravens had so many injuries last season that now, a few months later, it's hard to remember who was out when and for what.

Patrick Ricard went on injured reserve during the very last week of the season with knee issues. Now he's back, and at the team's offseason workouts, he's noticed some changes.

“I think our warmup is more broken down. We're stretching more, we're doing a little bit more for flexibility and just overall mechanics of warming up,” said Ricard, a Pro Bowl fullback. “I think it's also a little bit of less reps. I always remember, we always started out with like reps of a range of 10 to 12. Now we're starting out with eight to 10. So I think they're trying to tone it down a little bit and make sure that we're really just getting into the groove of things."

Baltimore's 2021 season was ruined by injuries, and although bad luck obviously played a role in that, coach John Harbaugh said earlier this offseason he didn't want to write it off as a fluke. Harbaugh said the team needed to do everything possible to make sure last season's problems didn't happen again, and he said the team reviewed everything from practice schedules to training and conditioning.

“He's really good about, ‘Hey, we don't want to overreact, but we're not going to minimize it either,'" strength and conditioning coach Steve Saunders said Wednesday. “Everybody knows football's physical, but that doesn't excuse anything. We should still look and see, is there something we can tweak? Something we can do better?”

Much of Baltimore's success in 2022 will depend on whether the team avoids a similar rash of injuries — and whether the players who went down with major injuries last year can come back strong. Quarterback Lamar Jackson missed the last four games of the season because of ankle problems. That seemed downright routine compared to what some other key players went through.

Running backs J.K. Dobbins and Gus Edwards were lost to knee injuries before the season even started. So was cornerback Marcus Peters.

“I think ACL, certainly the procedure itself, but certainly the rehab protocols have changed dramatically over 10, 20 years,” Saunders said. “I think we just know more about it. You know better how to rehab it. You also know that sometimes, the time isn’t the time. It can take longer, and some guys will adapt shorter. ... The guys, I feel like, today definitely have a much higher percentage of returning to normal after an ACL than they did 20 years ago, which is a great thing.”

As for Ricard, he seems to have recovered from his injury issues pretty quickly.

“As soon as the season ended, I just rehabbed and just rested. I was able to participate in the Pro Bowl,” he said. “Ever since then, I’ve been back home in Massachusetts rehabbing, working out. I’ve been full go here, and I feel good.”

“He was my linebackers coach in 2019,” linebacker Josh Bynes said. “Mike knows this place really, really well. He knows the foundation, and Mike is setting the tone right now in these meetings that we’re having with the defense and what he (envisions) for us. I love Mike to death, and I can’t wait to actually, finally get out there and get going with everybody and just having fun. But Mike is definitely a great, great defensive coordinator — a genius in the room.”